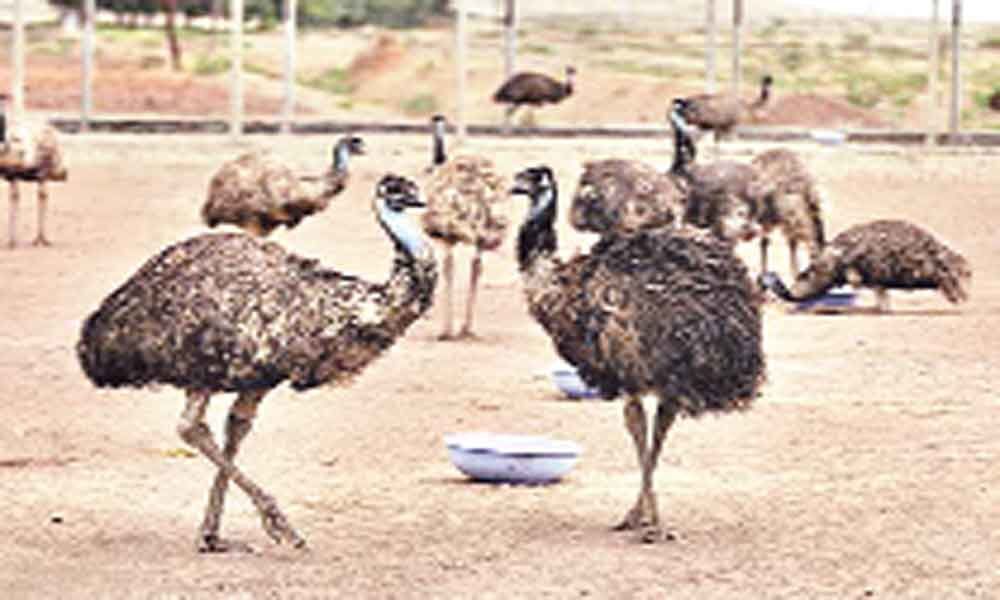 Emu farms that sprouted here, there and everywhere in the united Andhra Pradesh are now battling to survive. About 450 farmers who ventured into emu farming with 25% subsidy and financed by various commercial banks under the guidelines of the National Bank for Agriculture and Rural Development (NABARD) are now in deep debt as the losses mounted.

Hyderabad: Emu farms that sprouted here, there and everywhere in the united Andhra Pradesh are now battling to survive. About 450 farmers who ventured into emu farming with 25% subsidy and financed by various commercial banks under the guidelines of the National Bank for Agriculture and Rural Development (NABARD) are now in deep debt as the losses mounted.

Dr Srinivas Penchala, member of Telangana Emu Farmers Association said, "In united Andhra Pradesh, the government assured 75% loan wavier according to GO MS-14. Similarly, we request Chief Minister of Telangana K Chandrashekar Reddy to provide the same loan waiver which we are trying since 2012. After no further progress in emu farming and constant pressure from the banks, the Telangana Emu Farmer Association member Hari Babu committed suicide by jumping in front of a running train.

After this incident, the government formed a committee to look after the loan waiver files and study them but this process is put on hold because of the assembly elections and still this issue has not been addressed. But the banks didn't stop in pressurising the farmers and notices were sent to seize our lands. We request the CM to provide 100 per cent loan waiver and to stop the bank pressure."

Emu farmers from Telangana are debilitated financially after the 'Emu Farming' promoted by NABARD failed to provide marketing facilities for the farmers. The farmers have made a vehement appeal to the Chief Minister of Telangana K. Chandrashekhar Rao to come to their rescue and waive off the loans to prevent suicides.

Each emu requires 9 to 18 liters of water daily and 3 times food per day which includes a simple diet of fruits, seeds, growing shoots of plants and insects to keep it, healthy which is expensive for a middle-class farmer.

However, their hopes faded when NABARD failed to keep its promise. To survive, the farmers tried to continue the breeding of the birds. Even though they made all-out efforts to market them, they could not get any encouragement either from NABARD or the Centre. The birds have grown old and the chicks have grown up.

With no income coming from them, the farmers repeatedly submitted memoranda to NABARD and the Centre to save them as they were unable to bear the recurring expenditure on maintaining the birds and running the farms. With debts mounting they had to sell off their land and other properties to support their operations.

"Because of the pressure from the banks our families might go homeless, due to these debts we can't send our children to schools or get them married and can't treat if someone gets sick. There are 118 farmers waiting for the right decision to be made," added Srinivas.

Venkateshwar Reddy, an Emu farmer and President of Telangana Emu Farmers Association, said, "The central government and NABARD encouraged us in taking up emu farming. Proper training was given to the farmers in Rajendra Nagar.

A 25 per cent subsidy and Rs 30 lakh loan per unit was approved out of the 30 lakh. 10 per cent should be borne by the farmer and 25 per cent (Rs 7, 50,000) subsidy is given by NARBAD and Rs 20 lakhs is provided through bank to set up unit. But this project has turned out to be a failure as there is no market for Emu products and the expenses to raise those birds are too much. We have faced Rs 50 lakh loss and are in debt.

We requested the government to support the farmers and waive off our loans as we are the innocent ones who are facing. We have taken this matter to the notice of Jithender Reddy and through him we put up this matter to the Telangana CM and got a good response from him. But when the process started, the government dissolved and the matter is on hold after having a stay order from the High Court."

"Our property has been seized. When we were approached to start emu farming, the government told us emu was a golden bird, whose oil, eggs, meat were useful and they would have a huge market. Now we are stuck with all our lands being seized and no proper response from the authorities. Farmers are depressed and committing suicide. Since it was the government which approached and convinced us, we want it to give us 100 per cent waiver on our loans," added Venkateshwar.