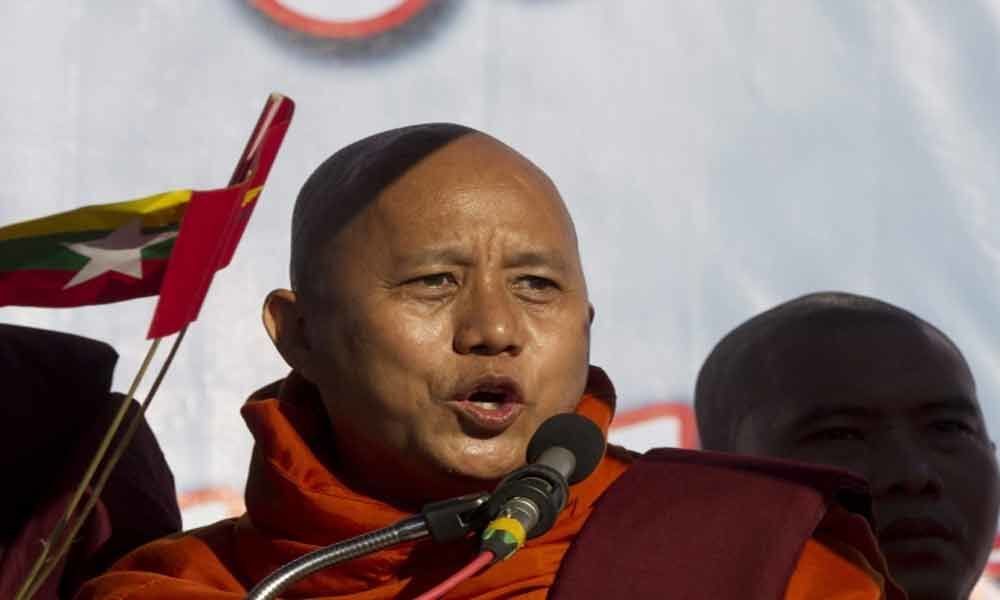 Wirathu has long been the face of the country's Buddhist nationalist movement, notorious for espousing hate against the Rohingya minority.

YANGON: Myanmar police issued an arrest warrant Tuesday evening for an ultra-nationalist monk known as the "Buddhist Bin Laden" for his vitriol against Islam and particularly the Rohingya Muslim community.

Wirathu has long been the face of the country's Buddhist nationalist movement, notorious for espousing hate against the Rohingya minority.

A warrant was "filed and applied directly at western district court against him (Wirathu) under article 124(a)," police spokesman Myo Thu Soe told AFP late on Tuesday.

He said he was unable to give specific details about the reasons behind the warrant.

The law prohibits anyone who "attempts to bring into hatred or contempt, or excites or attempts to excite disaffection towards the Government" and carries a maximum jail sentence of three years.

Wirathu's monastery is in Mandalay but his whereabouts Tuesday or when he might be detained were unknown.

In 2013 the hardliner appeared on the cover of "Time" magazine as "The Face of Buddhist Terror".

He has called for boycotts of Muslim-owned businesses and restrictions of marriages between Buddhists and Muslims.

A council of senior monks stopped him temporarily from speaking in public but the firebrand abbot has spoken at a string of pro-military rallies since the ban ended in March last year.

Facebook kicked him off the platform in January 2018 after a string of incendiary posts targeting the Rohingya.

Rights groups say these helped whip up animosity towards the community, laying the foundations for a military crackdown in 2017 that forced about 740,000 to flee over the border to Bangladesh.

Like many in Myanmar, Wirathu pejoratively refers to the minority as "Bengali", implying the group are illegal immigrants.

Refugees' testimonies of mass killings, rapes and arson spurred UN investigators to call for the prosecution of top generals for "genocide" and the International Criminal Court (ICC) is conducting a preliminary probe.

"The day when the ICC comes here... is the day that Wirathu holds a gun," he said in a speech to a rally of hardline nationalists in October last year.