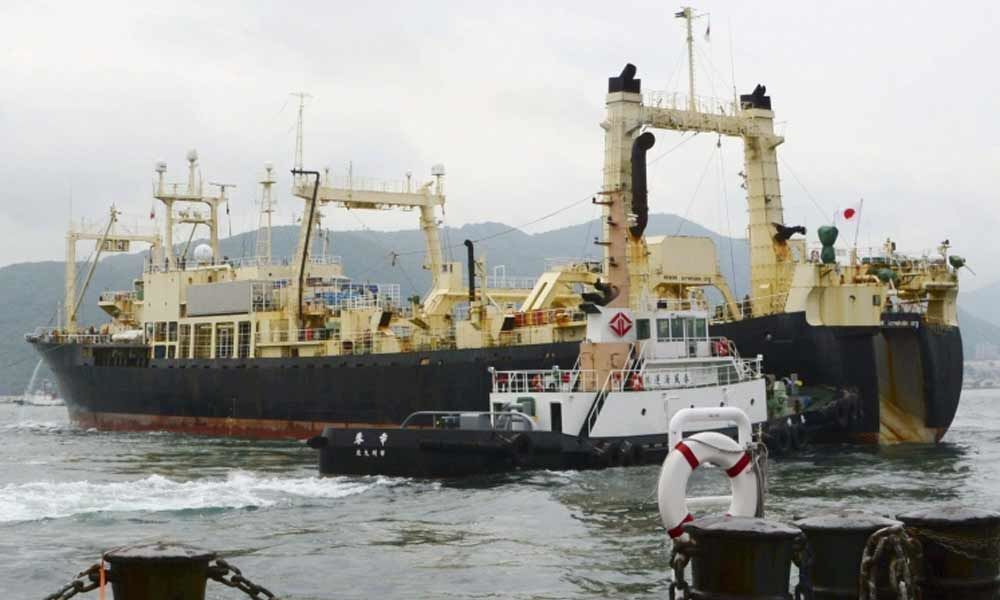 Whaling has long proved a rare diplomatic flashpoint for Tokyo, which says the practice is a Japanese tradition that should not be subject to international interference.

KUSHIRO: Whaling ships set sail Monday on the first commercial hunts in decades, as Japan brushed aside global outrage over its decision to resume what conservationists say is a cruel and outdated practice.

Five vessels from whaling communities left port in northern Japan's Kushiro with their horns blaring and grey tarps thrown over their harpoons.

Japan's decision to withdraw from the International Whaling Commission and resume commercial hunts was slammed by activists and anti-whaling countries, but has been welcomed by Japanese whaling communities, who celebrated the departure from Kushiro with a send-off ceremony.

"This is a small industry, but I am proud of hunting whales. People have hunted whales for more than 400 years in my home town". Whaling vessels were also leaving Monday morning from other ports including in Shimonoseki in western Japan.

The country's Fisheries Agency said Monday it had set a cap for a total catch of 227 whales through the season until late December -- 52 minke, 150 Bryde's and 25 sei whales.

"I'm a bit nervous but happy that we can start whaling," 23-year-old Hideki Abe, a whaler from the Miyagi region in northern Japan, told AFP before leaving. I don't think young people know how to cook and eat whale meat any more. I want more people try to taste it at least once".

Whaling has long proved a rare diplomatic flashpoint for Tokyo, which says the practice is a Japanese tradition that should not be subject to international interference.

As an IWC member, Japan was banned from commercial hunts of large whales, though it could catch small varieties in waters near its coastline.

But it also exploited a loophole in the body's rules to carry out highly controversial hunts of whales in protected Antarctic waters under the banner of "scientific research".

Activists said the hunts had no scientific value, and Japan made no secret of the fact that meat from whales caught on those hunts ended up sold for consumption.

"This is a sad day for whale protection globally," said the group's head of campaigns Nicola Beynon, accusing Japan of beginning a "new and shocking era of pirate whaling".

With its withdrawal from the IWC, Tokyo will carry out whale hunting off Japan, but will end the most controversial hunts in the Antarctic.

"The resumption of commercial whaling has been an ardent wish for whalers across the country," Shigeto Hase, the head of Japan's fisheries agency, said at the departure ceremony in Kushiro.

He said the resumption of commercial whaling would ensure "the culture and way of life will be passed on to the next generation.

" Whale meat was a key source of protein in the immediate post-World War II years in Japan, when the country was desperately poor.

But consumption has declined significantly in recent decades -- with much of the population saying they rarely or never eat whale meat -- and activists have pressed Japan to ditch the practice.

Some believe that Japan's return to commercial whale hunting will effectively sound the death knell for the industry.

"Japan is quitting high-seas whaling. That is a huge step towards the end of killing whales for their meat and other products," said Patrick Ramage, director of marine conservation at the International Fund for Animal Welfare.

He said commercial whaling in Japanese waters was unlikely to have much of a future given dwindling subsidies and the shrinking market for whale meat.