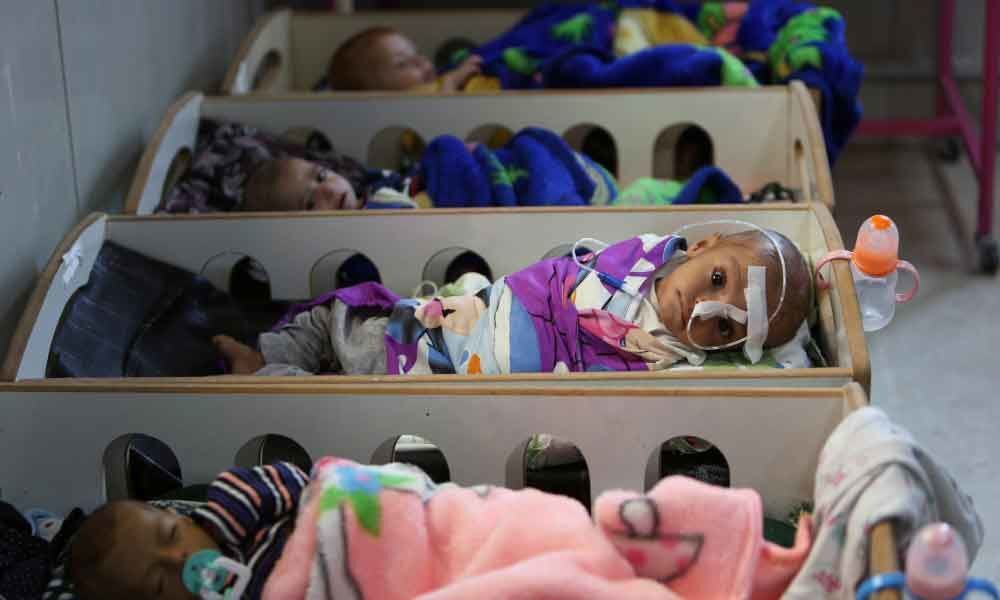 The paramedics' log at al-Hol camp in eastern Syria lists the injuries and ailments of infants rushed from the battlefield to its crowded, dirty clinic: malnourishment, stunted growth, broken leg.

The paramedics' log at al-Hol camp in eastern Syria lists the injuries and ailments of infants rushed from the battlefield to its crowded, dirty clinic: malnourishment, stunted growth, broken leg.

Those in critical need – mostly emaciated babies born in war to the wives of dead Islamic State militants – are taken to the nearest hospital, a bumpy two-hour drive away. Other people cram into a waiting room with a tin roof in a growing queue for basic medical treatment. At the hospital, staff have had to build two portacabins on the roof that serve as a makeshift ward for the treatment of malnourished babies, crammed sometimes two or three to a cot.

Lower floors are filled with teenagers missing limbs and women with shrapnel and bullet wounds. The exodus during intense fighting of more than 60,000 people from Islamic State's final redoubt of Baghouz is overwhelming medical staff in eastern Syria who struggle to cope at the camp and ill-equipped hospitals.

Scores of people, mostly children, have died on the 150-mile (240-kilometre) journey to al-Hol or soon after arriving, aid groups say.

"My son has a dislocated hip. He needs an operation urgently," said Umm Mohammed, a veiled 33-year-old woman holding an expressionless six-month-old boy at the camp. "Medics keep saying they have more urgent cases to deal with - wounds and shrapnel injuries."

In the waiting area, dozens of people who mostly left Baghouz during a brief truce last month, arranged for civilians and surrendering militants to evacuate, sit on wooden benches or the concrete floor. Children in wheelchairs watch while babies scream as they are bandaged or given injections. US-backed forces declared the defeat in March of Islamic State's self-proclaimed caliphate – the territory it once held in Iraq and Syria – after militants were driven out of the village of Baghouz where they made a months-long last stand.

The intense bombardment and fighting to dislodge the Sunni Islamist extremist group cost countless lives and wounded many more people, including the wives of fighters, their children, IS supporters and other civilians trapped by the militants in the enclave.

Those who evacuated in recent weeks have strained healthcare in Kurdish-run areas of eastern Syria beyond capacity. In the clinic at al-Hol, which is hosting more than 70,000 people displaced by violence, many people wore crude casts. One woman said she did not have enough painkillers for a wound to her hand – a long metal rod from the explosion that wounded her and killed three relatives was still lodged in her knuckle. "I just want an X-ray at the hospital," she said, giving her name as Umm Ahmed.