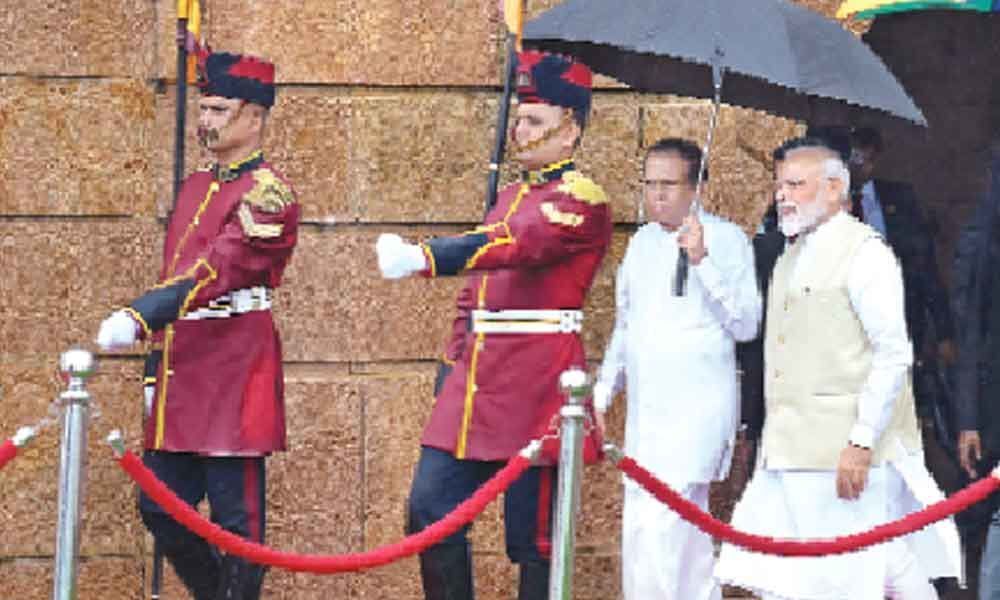 Prime Minister Narendra Modi on Sunday met Sri Lankan President Maithripala Sirisena for the second time in 10 days and agreed that terrorism was a "joint threat" that needed collective and focussed action.

Modi is the first foreign leader to visit Sri Lanka after the horrible terror attack of April 21 that killed over 250 people and was claimed by the Islamic State. His visit is being seen as India's affirmation of solidarity with the neighbouring country in its hour of crisis.

The Prime Minister's Office described his visit as "important, signifying the strong bonds of friendship with a valued neighbour". "Met President @MaithripalaS, our second meeting in 10 days.

President Sirisena and I agreed that terrorism is a joint threat that needs collective and focussed action. Reiterated India's commitment to partner with Sri Lanka for a shared, secure and prosperous future," Modi tweeted after his meeting.

The Prime Minister also met his Sri Lankan counterpart Ranil Wickremsinghe and Leader of Opposition Mahinda Rajapaksa during the short trip to the island nation.

Modi, who arrived here from the Maldives, started the day with a visit to one of the sites of the April 21 attacks, the St Anthony's church. "I am confident Sri Lanka will rise again. Cowardly acts of terror cannot defeat the spirit of Sri Lanka. India stands in solidarity with the people of Sri Lanka.

My heart goes out to the families of the victims and the injured," he later tweeted.

Before his departure, the Prime Minister interacted with members of the Indian Community in Sri Lanka at India House and emphasised the important role played by them in strengthening bilateral relations.

The Prime Minister said the Indian democracy had been strengthened by the sweeping mandate in the general elections. "The results of the Lok Sabha elections are a matter of study for the world as to how mature the Indian democracy is. We have seen people's respect for democracy and their commitment to it," Modi said.

The Prime Minister also appealed to the diaspora to contribute to India's development. India's image, he said, had changed a lot in the last few years.

"Today India's image in the world is getting stronger. A large part of credit for this goes to the Indian diaspora. Wherever I go, I am told about the successes and accomplishments of the Indian diaspora," the Prime Minister said.

President Sirisena presented Modi with statue of meditating Buddha. The PMO called the statue "a special gift from a special friend". India is Sri Lanka's largest trading partner globally, and it also accounts for the largest FDI in the island nation.