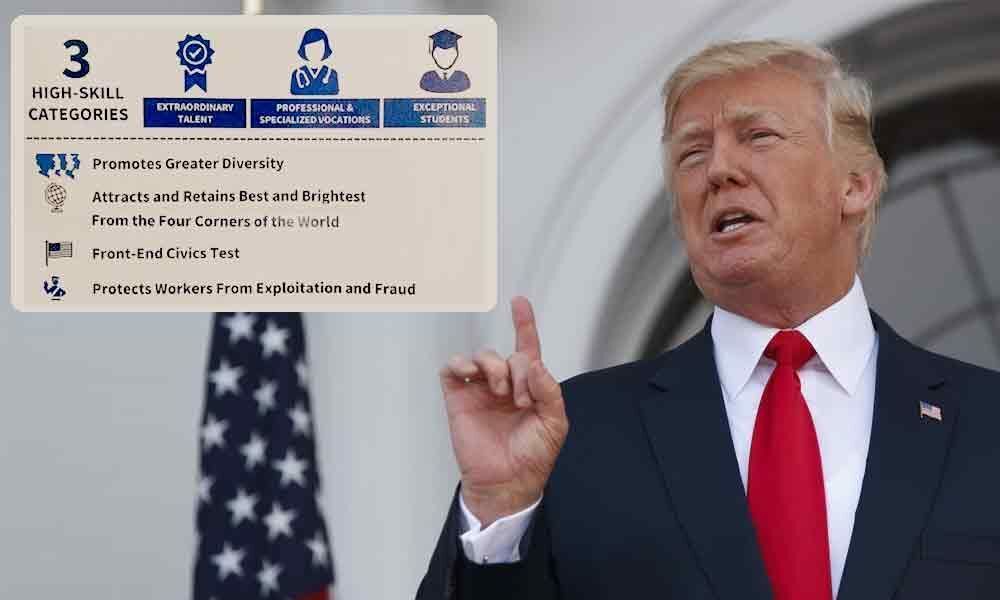 Washington: US President Donald Trump has said he will replace the existing Green Cards with 'Build America' visa, as he unveiled a new merit and points-based immigration policy that seeks to increase the quota for highly skilled workers from 12 to 57 per cent.

Every year the US issues nearly 1.1 million green cards, which give foreign nationals life-time permission to live and work in the US and a path to citizenship in five years.

Currently, most of the cards are issued based on family links and diversity visa, and a small section is given to people who are professionals and highly skilled.

Trump said on Thursday that he wanted to change that and unveiled a new proposal.

"Our proposal fulfils our sacred duty to those living here today, while ensuring America remains a welcoming country to immigrants joining us tomorrow.

We want immigrants coming in," Trump said in a major immigration policy address in the Rose Garden of the White House.

"We cherish the open door that we want to create for our country, but a big proportion of those immigrants must come in through merit and skill," he said.

The White House plan makes no change to the number of Green Cards allocated each year. "Instead of admitting people through random chance, we will establish simple, universal criteria for admission to the United States.

No matter where in the world you're born, no matter who your relatives are, if you want to become an American citizen, it will be clear exactly what standard we ask you to achieve. It will be made crystal clear," Trump said.

"This will increase the diversity of immigration flows into our country. We will replace the existing green card categories with a new visa, the Build America visa - which is what we all want to hear," Trump said amidst applause from the audience.

Trump said like Canada and many other modern countries, his administration seeks to create an "easy-to-navigate points-based" selection system.

"You will get more points for being a younger worker, meaning you will contribute more to our social safety net."