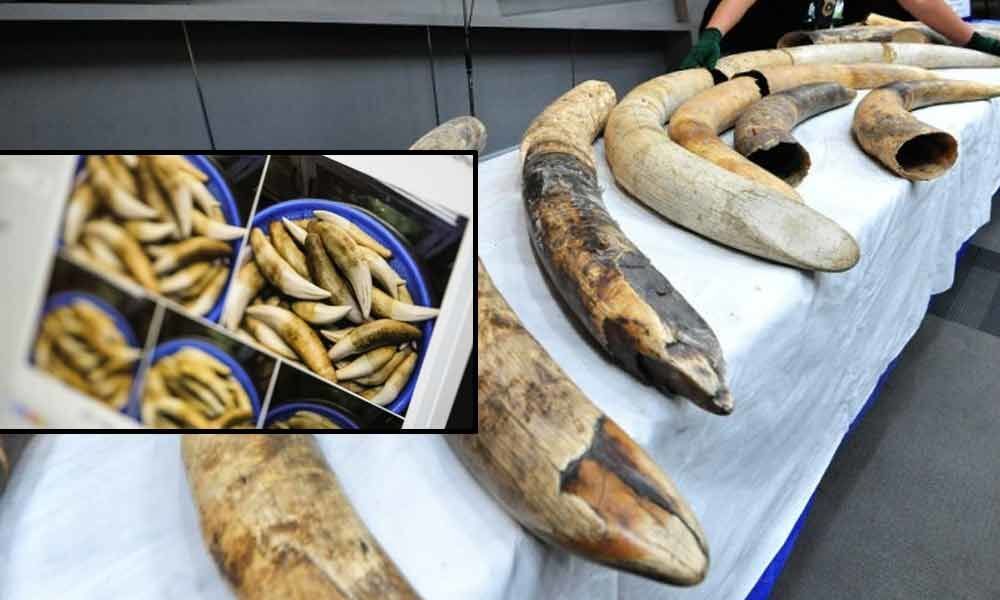 Directorate of Revenue Intelligence (DRI) on Tuesday said it has seized about 12 kgs of elephant tusks and five pieces of tiger teeth valued together at over Rs 1.14 crore from the city and arrested three person in this connection.

Acting on a tip-off, the DRI sleuths intercepted Muslima Begum with two pieces of elephant tusk weighing 4.27 kilograms. She is the second wife of Habibullah who has been allegedly heading the syndicate at Sealdah railway station.

Begum had brought the articles from Assam and was about to hand over the same to her husband in the station, the agency claimed.

"DRI sleuths busted a syndicate involved in smuggling of Elephant tusks and Tiger teeth. About 12 kgs of elephant tusks and five pieces of tiger teeth cumulatively valued at 1.147 crore were recovered and seized on Sunday and Monday. Three persons were arrested," a statement from the agency said.

Habibullah figured in a number of cases booked by the agency's Kolkata, Siliguri and Guwahati units, where "he had attempted to smuggle out 48.794 kgs of elephant tusks and ivory statues collectively valued at Rs 6.014 crore," a DRI official said.

He has been, "operating in smuggling of elephant tusks, ivory articles and tiger teeth and other animal parts out of India to various countries like Bangladesh, Nepal and Myanmar."

Immediate interrogation of the husband-wife duo and quick follow-up actions by DRI, resulted in recovery of one piece of ivory bangle and one piece of ivory from the flat of his son-in-law Adil Hussain in Park Circus area along with five pieces of tiger teeth and 29 pieces of assorted ivory, the agency said.

Some mechanical instruments along with Rs 1.48 lakh in cash were recovered from another flat of Habibullah in Karaya Road, officials said.

While the elephant tusks fetch lucrative prices in Nepal and Bangladesh, the tiger teeth are in great demand in China and Myanmar, the DRI claimed.

The export of animal body parts are prohibited for export under the provisions of Foreign Trade Policy, Customs Act, 1962 read with Wildlife (Protection) Act, 1972, it added.