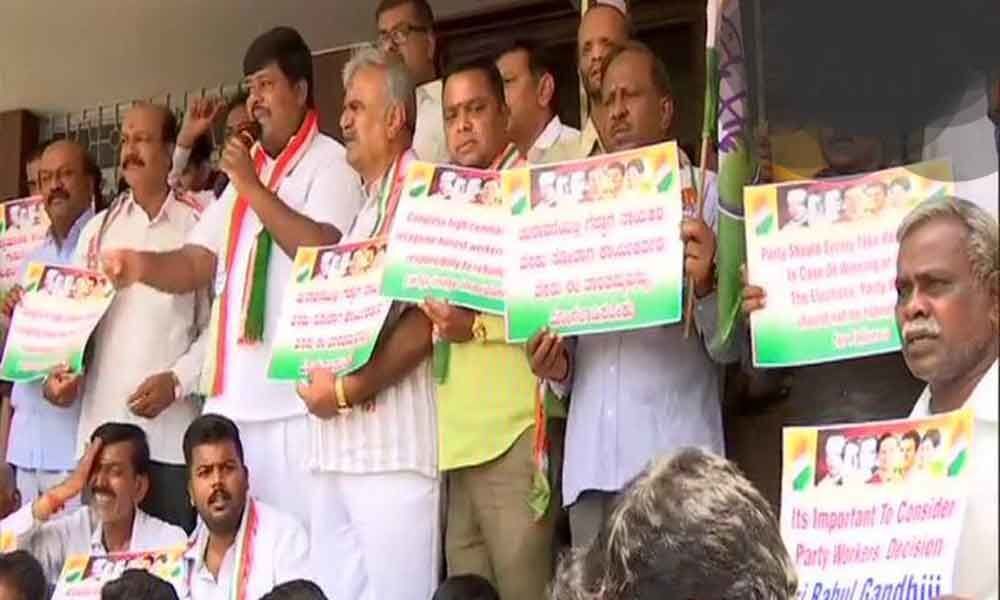 Gandhi had offered to resign from his post at CWC meeting held on Saturday, taking moral responsibility for poor performance in LS polls.

Bengaluru: Congress workers demonstrate outside party office urging Rahul Gandhi to continue as Congress President in Bengaluru on Wednesday. They are saying the worker's decisions need to be considered too in the process.

Tamil Nadu Congress Committee will also pass a resolution asking Gandhi not to step down, and to lead the party with a firm hand.

Gandhi had offered to step down from his post at the Congress Working Committee (CWC) meeting held on Saturday, taking moral responsibility for Congress' dismal performance in the Lok Sabha elections.

However, his offer was unanimously rejected by the CWC.

Senior Congress leader Sheila Dikshit, along with party workers, will also hold a demonstration outside Rahul Gandhi's residence on Wednesday, urging him to not to step down as the party president.

The demonstration will start at 4 pm outside the Gandhi scion's Tughlak Lane residence.

Congress leader Sheila Dikshit: We are going to be near the residence of Rahul Gandhi, will demonstrate there to convey our feelings that he should not resign. The Party will suffer a very heavy loss which we don't want. We are going there to plead with him to not do this. pic.twitter.com/egwl8HWkxf

Karnataka CM, HD Kumaraswamy on Congress President Rahul Gandhi: I will meet him tomorrow and speak to him. He should not resign. pic.twitter.com/gR3DELcc1e

Sources said that despite senior members making serious attempts to convince the 48-year-old party chief to rethink his decision, he remains unfazed.

On Tuesday, the party asserted that they are not facing any crisis and all speculations are just a creation of the media.

The Congress won 52 seats in the recent general elections, which is just eight more than 2014 in the outgoing Lok Sabha, while BJP bagged 303.