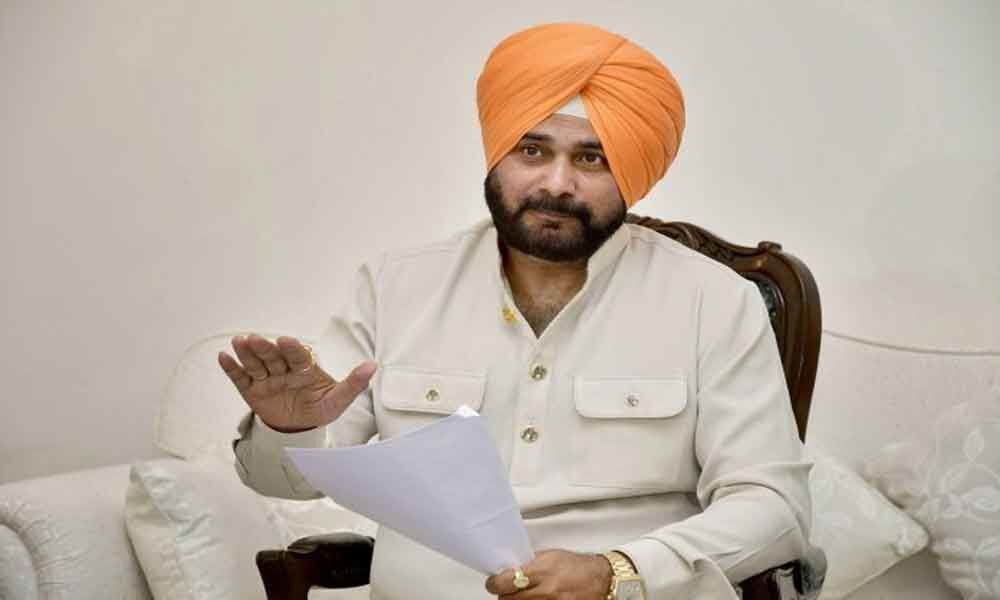 Congress leader Navjot Singh Sidhu, who has been at loggerheads with Punjab Chief Minister Amarinder Singh and was stripped off key portfolios in the cabinet reshuffle in June, has resigned from the state cabinet.

Chandigarh: Congress leader Navjot Singh Sidhu, who has been at loggerheads with Punjab Chief Minister Amarinder Singh and was stripped of key portfolios in the cabinet reshuffle in June, has resigned from the state cabinet.

The 55-year-old Sidhu took to Twitter on Sunday, making public his resignation letter, which was sent just four days after his portfolio was changed.

"I hereby resign as Minister from the Punjab Cabinet," Sidhu said in the letter to the Congress chief, which he posted on his Twitter handle on Sunday.

The date of his resignation letter was a day after he had met Rahul Gandhi in New Delhi when his portfolio was changed.

In another tweet later, Sidhu said he would be sending his resignation letter to the chief minister.

On June 6, Chief Minister Amarinder Singh had divested Sidhu of the Local Government and Tourism and Cultural Affairs Departments and allotted him the power and new and renewable energy portfolio.

Portfolios of several other ministers too had been changed in the reshuffling exercise.

In an apparent snub, Sidhu, the Congress MLA from Amritsar East, was also left out of the consultative groups formed by the chief minister on June 8, two days after the cabinet reshuffle, to accelerate the implementation of government's flagship programmes.

Over a month after he was stripped of key portfolios, Sidhu had not taken charge of his new assignment, as a stalemate with the chief minister had continued.

Congress veteran Ahmed Patel had been entrusted with the task of resolving issues between Sidhu and Singh.

Singh had met Patel during his visit to Delhi last month, but the party reportedly described the meeting as a "courtesy call".

The fact that Sidhu waited for over a month before making his resignation letter public indicated that he could have been waiting for reconciliation.

Ever since the portfolio reshuffle exercise, the Punjab minister and his wife Navjot Kaur have been maintaining a distance from the media.

Sidhu had approached Congress president Rahul Gandhi on June 9 and had "apprised him of the situation" besides handing over a letter to him.

He had also shared a picture with Rahul Gandhi, party general secretary Priyanka Gandhi and senior Congress leader Ahmed Patel on his Twitter handle and Facebook page on June 10.

Sidhu, a former BJP leader who had joined the Congress just ahead of the 2017 Punjab assembly polls, has been at loggerheads with Singh for some time now.

The tension between Singh and his cabinet colleague had come out in the open last month when the CM blamed Sidhu for the "inept handling" of the Local Government Department, claiming that it resulted in "poor performance" of the Congress in urban areas in the Lok Sabha polls.

The CM said last month that the urban vote bank had been the backbone of the Congress in Punjab but Sidhu's "failure" in carrying out any development work impacted the party.

Sidhu, however, had said that his department was being "singled out publicly" while asserting that he could not be taken for granted as he had been a "performer throughout".

Earlier, Singh had taken umbrage at Sidhu's "friendly match" jibe during electioneering in Bathinda on May 17.

This had evoked a sharp reaction from Singh. Hitting out at Sidhu, the chief minister had said, "If he was a real Congressman, he should have chosen a better time to air his grievances, instead of just ahead of voting in Punjab."

"He is harming the party with such irresponsible actions. It is not his election but that of the entire Congress," he had said.

"Perhaps he is ambitious and wants to be the chief minister," Singh had said.

Earlier also, the tension between Singh and Sidhu had come out in the public.

Singh had earlier disapproved of Sidhu hugging the Pakistan Army chief during his visit to the neighbouring country.