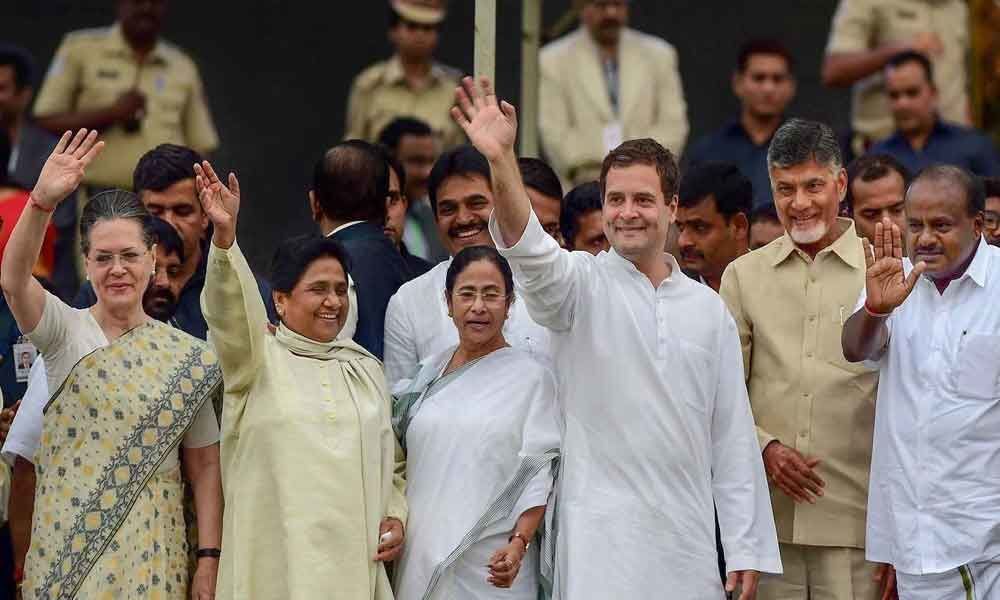 Top opposition leaders will meet in the national capital Tuesday to discuss the possibility of a non-NDA alliance staking claim to government formation and also move the Election Commission to press for their demand of tallying paper trail of votes (VVPATs) with electronic voting machine (EVM) figures.

New Delhi: Top opposition leaders will meet in the national capital Tuesday to discuss the possibility of a non-NDA alliance staking claim to government formation and also move the Election Commission to press for their demand of tallying paper trail of votes (VVPATs) with electronic voting machine (EVM) figures.

According to sources, leaders of opposition parties such as the Congress, TDP, Left parties, BSP, NCP and TMC will informally meet to discuss the way forward in case the NDA fails to get to the majority mark.

Notwithstanding exit polls that have predicted a majority for the BJP-led NDA, the opposition is going ahead with its strategy as most parties have trashed the forecast and claimed that the NDA would not get a majority in the Lok Sabha.

Opposition leaders are citing previous examples when exit polls were proved wrong, as also elsewhere in the world like the surprise result in Australia.

As part of his efforts to unite the opposition, Andhra Pradesh Chief Minister and TDP leader Naidu held a meeting on Monday with his West Bengal counterpart, Mamata Banerjee, at her Kolkata residence on forming a non-BJP government at the Centre in case of a hung verdict.

Naidu has been moving around across the country and has held several rounds of discussions with top opposition leaders in a bid to unite them and form an alliance to stake claim to form the next government in case the NDA falls short of the majority mark.

Akhilesh and Mayawati also held a meeting on Monday and discussed their strategy going forward.

However, in view of the exit polls, the opposition has turned a bit cautious and decided not to hold any formal meetings.

Sources said the opposition strategy was to procure letters of support from various parties and in case of a hung verdict, to present the same before the president to stake claim to form the government.

They added that the opposition did not want to leave anything to chance and did not wish to waste any time in staking claim for government formation and thus, was putting its house in order.

Opposition parties will also be meeting the Election Commission and demand tallying of VVPAT slips with EVM figures in an entire Assembly constituency in case a discrepancy is found in any polling booth.

The Supreme Court has asked the EC to tally the VVPAT slips with the EVM figures of five polling stations in each Assembly constituency across the country, which may delay the results.

In another releated development, the apex court Tuesday dismissed a PIL seeking 100 per cent matching of Voter Verifiable Paper Audit Trail (VVPAT) slips with Electronic Voting Machines (EVMs) during counting of votes on May 23 for Lok Sabha polls.