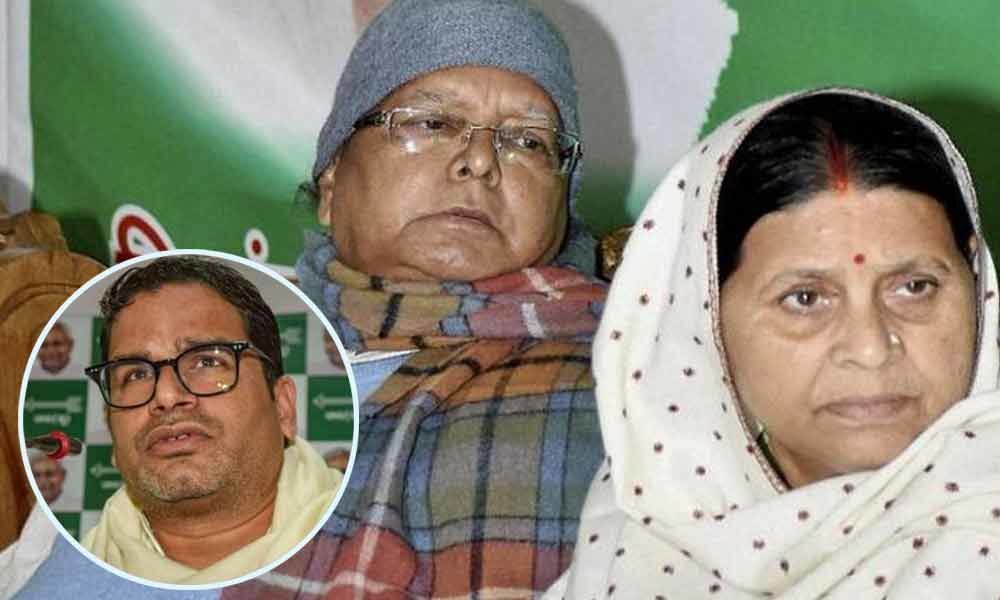 Poll strategist Prashant Kishor ON Saturday dismissed Rabri Devi's claim of he as an emissary of Nitish Kumar meeting her husband Lalu Prasad with a proposal to merge JD (U) and RJD, which should declare its prime ministerial candidate ahead of the polls and dared RJD president to tell the media what transpired during their talks.

Patna: Poll strategist Prashant Kishor ON Saturday dismissed Rabri Devi's claim of he as an emissary of Nitish Kumar meeting her husband Lalu Prasad with a proposal to merge JD (U) and RJD, which should declare its prime ministerial candidate ahead of the polls and dared RJD president to tell the media what transpired during their talks.

Kishor, who is the national vice-president of the Janata Dal (United), also came down heavily on Prasad for making "false claims" and quipped "those convicted or facing charges of abuse of public office and misappropriation of funds are claiming to be the custodians of truth".

He threw a challenge to the RJD supremo to sit with him before the media and tell everybody what transpired during their meeting and "who offered what. Whenever @laluprasadrjd ji wants, he should sit with me before the media as it would let everybody know what transpired between me and him and who gave an offer to whom (sic)," Kishor said in a tweet.

Rabri Devi on Friday dropped a bombshell claiming that Kishor had met Prasad with the proposal that the RJD and Nitish Kumar's JD(U) merge and the new entity thus formed declare its prime ministerial candidate ahead of the Lok Sabha polls.

If Kishor denies having met Prasad with such a proposal, he is speaking a "blatant lie", she said. "I got infuriated and asked him to go away as I had no trust left in Bihar Chief Minister Nitish Kumar following his betrayal," the RJD national vice-president, who is also the leader of the opposition in the state legislative council, said.

Earlier, RJD leader Tejashwi Yadav has said that many times people on behalf of Nitish Kumar met him as well approached Congress with reconciliation proposals.

Rabri Devi's revelation coming close on heels of Prasad in his recently-published autobiography claiming that Kishor had met him as an emissary of Nitish Kumar with the proposal that the chief minister's party be re-inducted into the Grand Alliance has stirred the political pot in Bihar.

Kumar had in 2017 walked out of the Grand Alliance, which was formed upon his party's partnership with the RJD and the Congress, and had re-joined the BJP-led NDA.

Kishor had earlier termed as "bogus" the claim of Prasad in his recently published autobiography that Kumar wanted to return to the Grand Alliance, for which he had sent Kishor as his emissary to the RJD supremo. Kishor had worked with both Kumar and Prasad as a strategist during the 2015 Bihar Assembly polls.

He formally joined the JD(U) in September 2018.

Companion since days of Patna University politics, Prasad and Kumar had long association with each other before they separated in mid-90s. As a key strategist, Kumar used to be known as "Lalu's Chanakya" after the latter became the leader of the opposition in 1989 in the Bihar assembly after death of veteran socialist leader Karpoori Thakur.

He had also played an important role in making Prasad Chief Minister of Bihar in 1990. But, by 1994, differences had started to crop up between the two top leaders of Mandal campaign that led to providing reservation in government jobs to the OBC. Kumar walked out of Janata Dal to form Samta Party with socialist icon George Fernandes.

Three years later, Lalu broke away from the party to form Rashtriya Janata Party (RJD) in 1997. The same year, Lalu lost the chief minister's chair because of his alleged involvement in the fodder scam but in an unexpected move made wife Rabri Devi the chief minister.

Kumar's Samta Party formed an alliance with the BJP in the 1996 general election. After a long fight, Kumar managed to finally remove RJD from the power in 2005.

Since, then Kumar has been serving as CM except for a brief period in 2014 when he had quit the post after his party got a drubbing in the hands of Narendra Modi's BJP and appointed Jitan Ram Manjhi on the seat. Kumar and Prasad joined hands in 2015 and defeated the BJP in Bihar assembly election.