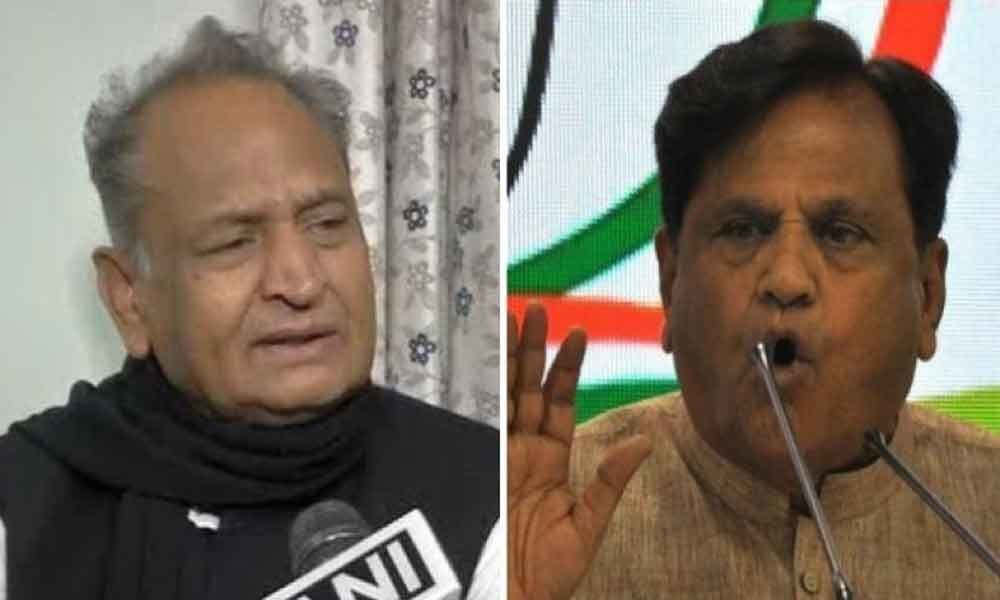 There was wild speculation that after Rahul's resignation, senior leader Motilal Vora would be the interim president of the party.

New Delhi: As Rahul Gandhi resigned as Congress President on Wednesday, veteran Congress leader Ahmed Patel took to Twitter to say that Rahul will "always remain my leader" and that his resignation is "unfortunate".

"Rahulji's resignation letter is unfortunate. We all are accountable for this defeat. He has, in a short span, already made tremendous contributions in strengthening the party and we all believe his endeavour should continue," Ahmed the treasurer of AICC said in a tweet on Wednesday.

The Rajya Sabha MP from Gujarat followed it up with a successive post in which he said, "He (Rahul Gandhi) is and will remain, my leader, our leader and will continue to provide solid strength for the Congress."

Patel's statement assumes significance as he has been among the key mentors of Rahul Gandhi, chosen personally by Congress ex-president Sonia Gandhi to whom he served as political secretary.

Patel's statement came after a senior Congress party source told ANI on Wednesday that Rahul Gandhi will continue to be the Congress president till the time Congress Working Committee (CWC) accepts his resignation.

There was wild speculation that after Rahul's resignation, senior leader Motilal Vora would be the interim president of the party as per its constitution.

Earlier on Wednesday, Vora had rejected the reports of him being appointed the interim Congress president after Rahul resigned from the top post. "I have no information regarding me being made the interim president of the party," Vora had told ANI here.

Other senior leaders such as Salman Khurshid and Ashok Gehlot have also expressed that they will continue to follow Rahul Gandhi.

Khurshid said Rahul has left the office of party president but he does not cease to be their leader.

"Rahul Gandhi has left the office of party president but he does not cease to be our leader. Sonia Gandhi is not president anymore but she remains our leader. By way of natural standing they will continue to have admiration, affection, the confidence of party workers in them," Khurshid said.

Rajasthan Chief Minister and another Congress veteran, Ashok Gehlot also took to Twitter to say that the party is "very hopeful" that soon Rahul will return "to lead the party forward, to a new and robust future."

Gehlot said that the party is hopeful that Rahul will return to lead it and the party "will bounce back and Congress Party would continue to defeat the fascist forces under Rahul ji's dynamic leadership."

"We all wish that he continues to lead the party as he has been doing, bringing vigour, dynamism and youthful energy at all levels of the party's organization. We are very hopeful that soon he will return to lead us and take the party forward, to a new and robust future," Gehlot said.

"Rahul Gandhiji's resignation is very disappointing. He has been leading the party with a clear vision and positive energy. He became the strongest voice of opposition in the country and lead from the front, raising issues crucial for the nation," he said.

Gehlot said he is certain that Rahul will certainly reconsider his decision as the party needs him and the country needs him to fulfil the role of a very able opposition leader.

Reiterating what he and others in the party have been stating for some time now, Gehlot said, "The defeat in Lok Sabha elections is a collective responsibility and Rahul alone cannot be held responsible for it."

"We all urge him not to hold himself responsible for the same," he added.

"BJP's nationalist and communal agenda lead to the results that we saw. Very soon, the nation will realise that the policies espoused by Rahul ji - of peace, unity, harmony- those values will take this Nation to new heights," he said.

"The Congress party firmly believes in the political acumen of Rahul he had successfully led the party to the victory in the recently held state assembly election in Rajasthan, Madhya Pradesh and Chhattisgarh and that in the recent past also in Gujarat," Gehlot said.

Rahul on Wednesday announced that he was no longer the president of the Congress, and the party should decide on a new chief without delay.

He posted a four-page resignation on the social media.

"The party should decide on the new president quickly without further delay. I am nowhere in this process. I have already submitted my resignation and I am no longer the party president. CWC should convene a meeting at the earliest and decide," Gandhi told reporters in the parliament.

Rahul has also removed the tag of party President from his Twitter bio hours after confirming his resignation from the top post.

Gandhi, currently a Member of Lok Sabha from Wayanad in Kerala, became the Congress president in 2017.