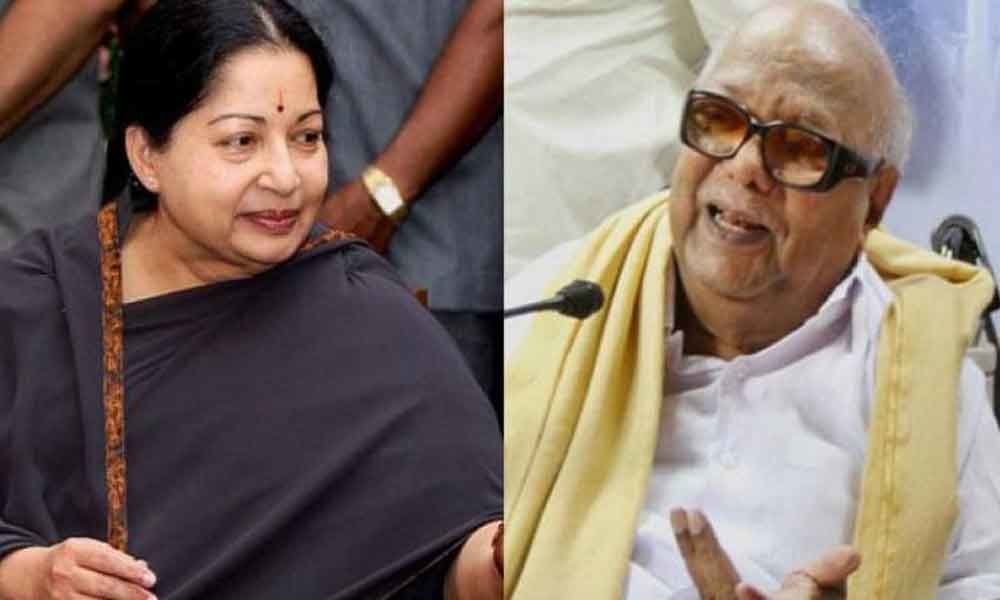 Karunanidhi played a key role in matters like state autonomy and was instrumental in bringing key projects like Sethusamudram, he added.

Traditional rivals DMK and AIADMK are ready to take on each other as it is election time again in Tamil Nadu. But this year, two powerful voices will be missing from their campaign. They are M Karunanidhi and J Jayalalithaa.

AIADMK chief Jayalalithaa passed away in December 2016. Her long-time rival, DMK supremo Karunanidhi, died on August 7, 2018. As the election days get closer, the AIADMK led by O Panneerselvam and K Palaniswami is going all out to dedicate a "substantial success" to their 'Amma' and the DMK steered by M K Stalin is determined to take forward the "Kalaignar legacy".

The stakes for the three leaders are high, as their parties tackle with the loss of the lodestars who guided their electoral fortunes. Result 2019 will gauge their leadership and strategising skills in an election with a vacuum created by the death of Jayalalithaa and Karunanidhi.

"Amma's absence is indeed a big vacuum. But this is a passionate movement. And to realise her dreams, the chief minister (Palaniswami) and his deputy (Panneerselvam) are taking the party forward," said AIADMK spokesperson R M Babu Murugavel. The DMK appeared equally confident.

"He (Karunanidhi) may not be alive but we are duty bound to take forward his aspirations. He has given a blueprint and we have to take it forward," said senior DMK leader K S Radhakrishnan.

"Amma came forward to lead us and emerged as a big lead and put the party in ruling saddle for about 27 years in its existence of 47 years," Murugavel told PTI, recalling the days after the death of AIADMK's charismatic founder MGR. Jayalalithaa, he said, was not with them but the huge cadre-based party would walk the path set by her and win all the seats in the state.

Karunanidhi played a key role in matters like state autonomy and was instrumental in bringing key projects like Sethusamudram, he added. Though leaders of the two parties express confidence about their showing in the election, political analyst Shyam Shanmugam feels the absence of Jayalalithaa and Karunanidhi might dent their vote share.