Mummified mice found in husband and wife's tomb in Egypt 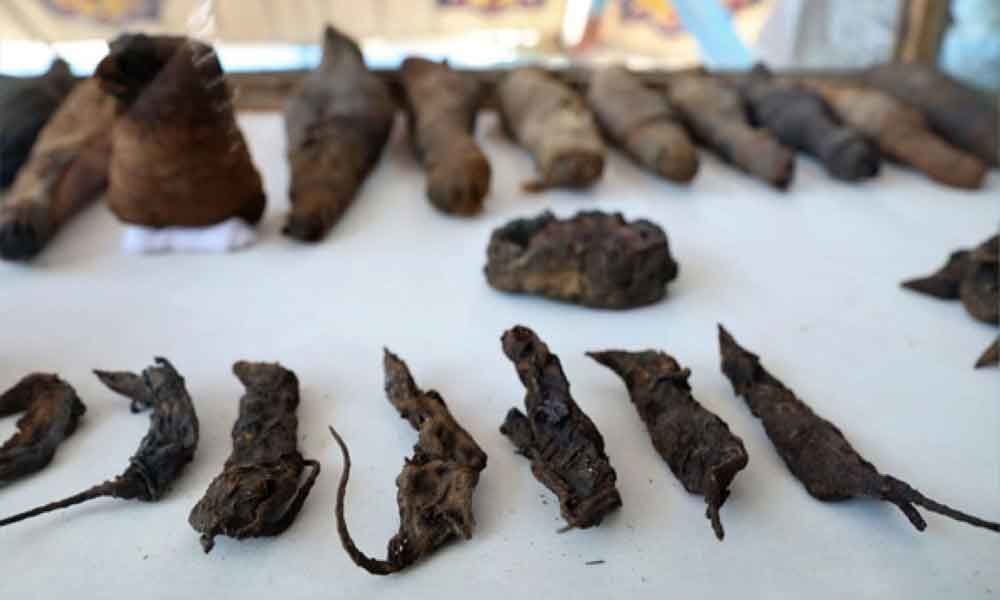 A collection of animals including eagle, falcon, ibex and dogs and cat is found in a Greek-era tomb in the ancient town of Akhmim.

Dozens of mummified mice have been found in a newly discovered tomb belonging to a husband and wife in Egypt.

The burial chamber was located after authorities came across a group of grave robbers attempting to secretly dig in an area of archaeological importance.

The tomb, which dates back to the Ptolemaic, or Greek, era of Egyptian history, is thought to be about 2,000 years old.

Egypt's ministry of antiquities said it found the remains of several birds and animals, as well as the occupants, a high-ranking official called TuTu and his wife T-Cheret Isis.

Other animals include a mummified eagle, falcon, ibex, dogs and cats.

The grave consists of two underground rooms with various decorations, including a "winged sun disk" and another disk with the name "Horus, Lord of Heaven" written on it.

The names of the two occupants and their parents are also inscribed on the interior.

A statement issued by the ministry said in translated Arabic: "The cemetery is in a good state of preservation and is characterised by the beauty of its engravings and bright colours.

"On both sides of the entrance, two scenes of the god Anubis are received by Tutu once, and once again by Isretis, in addition to the trial scene in front of the god Osiris and the successor of the daughters Isis and Nephthis."

It was found in the small but historically important town of Akhmim, which was on the ancient trade routes, according to Encyclopaedia Britannica.

The town was well known to the Greeks, being mentioned by Herodotus and Strabo, and was said to have been famous in the Roman world for its textiles.

It later became a centre of the Coptic community and in 1907, when a census was carried out, it was the largest town on the east bank of the Nile in Upper Egypt.

The latest find comes as an Egyptian team has re-erected a 15m (49ft) statue of Ramses II found broken into 70 pieces in Akhmim in 1981, after a two-month reconstruction and restoration.