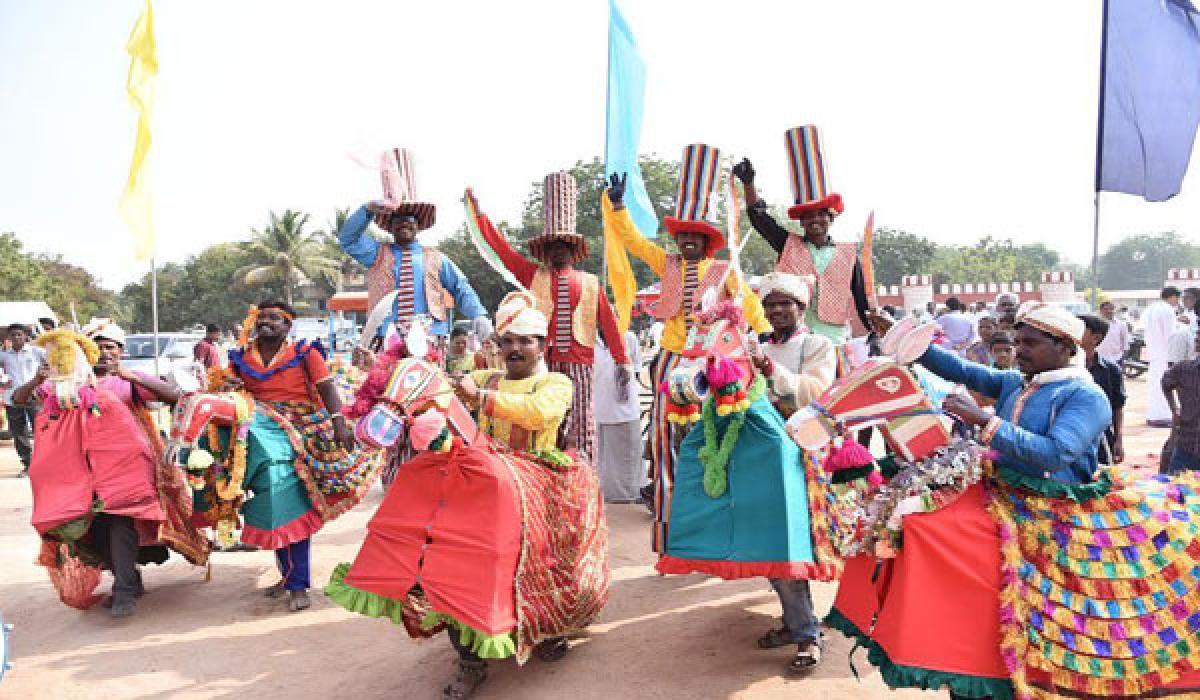 A host of traditional artistes, who perform ancient art-forms which are on the wane for several reasons are thankful to the government for patronising their dying art-forms. However, hundreds of artistes, who are not covered under the government pension scheme, are running to the offices of Cultural Affairs and the Information and Public Relations department for inclusion in the scheme.

Anantapur: A host of traditional artistes, who perform ancient art-forms which are on the wane for several reasons are thankful to the government for patronising their dying art-forms. However, hundreds of artistes, who are not covered under the government pension scheme, are running to the offices of Cultural Affairs and the Information and Public Relations department for inclusion in the scheme.

They say that no new pensions had been sanctioned after the TDP came to power in the state. The office of the Cultural Director is not taking any interest in the affairs of the cultural artistes, they alleged. The artistes say the government should give the pension benefits and identity cards to all traditional artistes.

Rajyalakshmi, a Burra Katha artist, says that she is grateful to the government for giving her a pension of Rs 1,000 every month, which is sustaining her family. “We are artistes and we will die as artistes but we cannot think of abandoning the age old art. At times, the government pension is helping them to still practice their age old art-forms,” she added.

The artistes are being engaged by the government during Sankranti Sambaralu, Independence and Republic Day celebrations and also during Ugadi festival. Another heartening thing is the government utilising their services for the government's publicity campaigns and schemes.

Nagaraju, a Dappu artist bemoaned that even in rural areas when village-level programmes are organised, the older generation of people are watching the programmes but the youth are confined to the idiot boxes. Film movies are having a sway over the common masses and dominating the people's lives. The artistes are also happy at the central government's ministry of cultural affairs sponsoring trips to abroad for performances.

There are more than 500 families of the artistes both young and old trying to keep alive the dying art-forms. But for some government patronage, the ancient art-forms would have faded into history by now.Boravayyalu artistes dressed in black blankets (Kamballu) perform unique dance. Scores of theirs including Keelu Gurralu, Urumulu, Tholubommalu, Chekka Bajana, Kolatam, Maradallu with long legs, Veerappa Dollu, Hari Katha and Burra Katha artistes are some of the artistes who with multiple art-forms had enthralled the audience.

The colourful artistes with their rustic steps in dance were the cynosure of all eyes. These artistes if invited to perform at one show as it happened at Sankranti Sambaralu would make people forget the modern movies for a while as the performances provide a diversity of dances.

These dance forms provide a healthy climate with no sexual connotations as it normally is in movies. Fortunately, the ancient art-forms are not totally dead in rural areas as their services are utilised on some occasions but the remuneration they are paid does not help them to make a living, as a result the artistes turn into daily wage labourers along with others and occasionally they get invitations to perform from urban areas and that too mostly in government functions including DRDA etc.

Thotakura Ramudu, a Keelu Gurram artist from Rayadurgam talking to The Hans India said that the government pension of Rs 1,000 being paid to all artistes is a boon in the changed circumstances where modern dance forms, cinemas and TV serials in the idiot box are preferred for entertainment over the old fashioned clean art-forms. He says that some affluent marriage parties also hire them as part of efforts to reflect traditional culture in Hindu marriages.

Otherwise nobody is interested to even view their performances even free of charge when it came to their tastes and preferences. The Information and Public Relations department also hires them to perform during VIP visits and also for publicising the government schemes both at the state and central level, says Jayamma, in-charge I&PR Additional Director.
These artistes are also used by the central government for campaigns to spearhead on subjects like iodine deficiency, Swachh Bharat, child labour, child marriages and a plethora of awareness campaigns. Another Hari Katha artist Swarna Teja says that the government should make it mandatory for government departments to utilise their services in awareness campaigns. She also expressed her gratitude to the government for the Rs 1,000 pension they are getting.