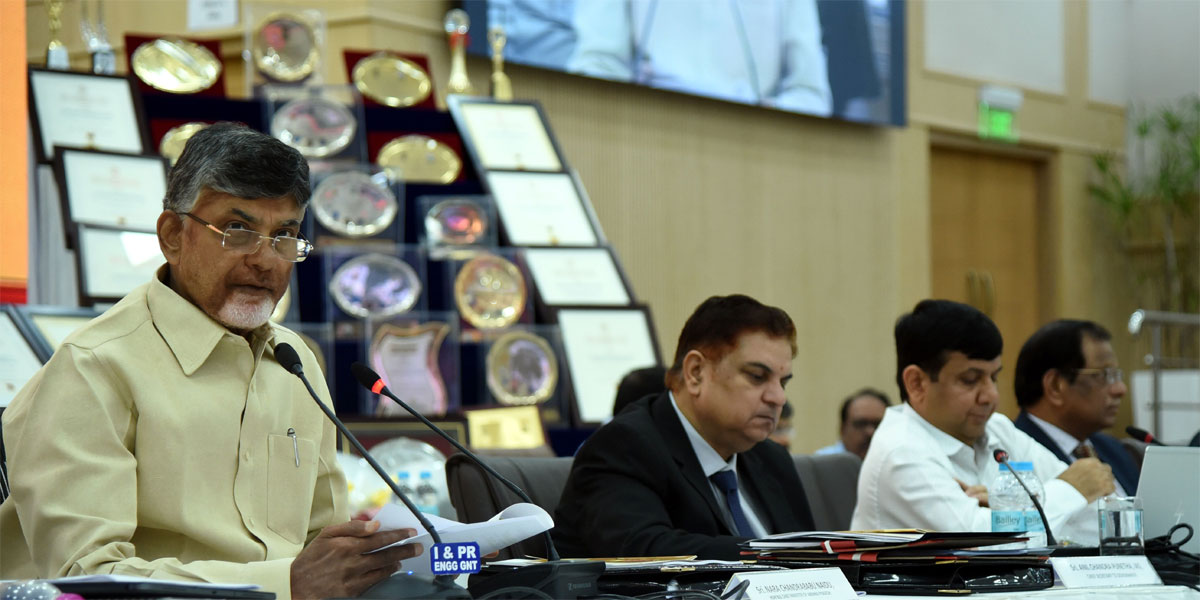 Stressing the importance of Janmabhoomi Maavooru programme in gaining public trust in governments performance for the last four and half years, Chief Minister N Chandrababu Naidu on Saturday asked the officials to showcase the development works and welfare schemes, including family welfare, in all the villages during the course of the programme

Amaravati: Stressing the importance of Janmabhoomi Maavooru programme in gaining public trust in government’s performance for the last four and half years, Chief Minister N Chandrababu Naidu on Saturday asked the officials to showcase the development works and welfare schemes, including family welfare, in all the villages during the course of the programme.

Inaugurating the Collectors' conference at his Undavalli residence, the Chief Minister said they should use the data that they get from Janmabhoomi programmes in preparing micro-planning and vision documents. He said that the Janmabhoomi programme should be organised like a festival. Debates should be held on white papers that are being issued by the state government. The officials should promote awareness among the people on the achievements of the state government during the programme. Naidu, referring to the zero-based natural farming, a programme which is close to his heart, said it was necessary for the Collectors to promote it as it would cut down on use of pesticides and fertilisers and thus reduce farmers' investment in agriculture. He said 635 awards received by the state government indicated the commitment of his government in grounding development works in the state.

Taking a dig at the Centre, Naidu said the way the High Court was being divided now was similar to the bifurcation of the state in 2014 and said the state government was not given any time to prepare for the HC division. Citing the partisan attitude of the Central government, the Chief Minister said that cancelling air show by the Indian IAF contingent at Visakha Utsav was yet another indication. Stressing the need for improvement of service sector, the Chief Minister said improvement in tourism would help trigger economic growth in the region. He asked the officials to prepare an action plan right from village level for development of service sector. Referring to Polavaram, the Chief Minister said the project would be completed by 2019. He said if the Centre extended cooperation to the state government, it would be ready much early.

He said despite non-cooperation from the Centre, the state government is able to achieve 10.52 per cent growth rate which had doubled the income of farmers. While stating that Anantapur district tops in horticulture, Naidu said the Pattiseema lift irrigation scheme helped in stabilizing the ayacut in Krishna and Guntur districts. Despite deficit rainfall, the agriculture sector logged in good growth. He directed the officials to improve services in the health sector too.

The Chief Minister asked the District Collectors to initiate steps to improve satisfaction levels of people in public distribution system. Commissioner of Civil Supplies B Rajasekhar said 61 ration shop dealers were suspended for irregularities. The officials said Krishna district tops in public satisfaction on PDS with 85 per cent, followed by West Godavari and Guntur districts with 84 per cent and lowest satisfaction level of 74 per cent in Anantapur, Srikakulam and Kurnool. The officials said of the total 21,564 applications seeking ration cards, 14,414 applications have been cleared. The Chief Minister advised dealers not to trouble the people citing technical problems, including biometric and Iris systems. He said officials should achieve 90 per cent satisfaction on PDS by next month.

The Civil Supplies Commissioner said millets were being distributed through fair price shops in consonance with the changing food habits of the people. The Chief Minister directed the officials to distribute pensions to all the eligible by clearing the 2.65 lakh applications. He asked the officials to release Rs 100 crore meant for school sanitation.