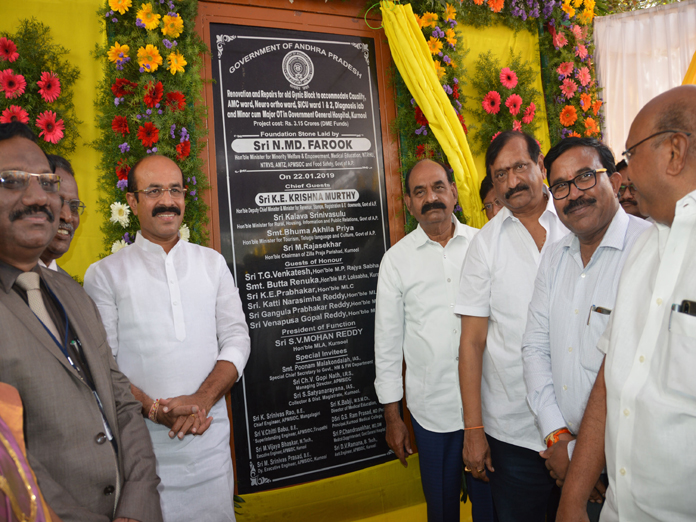 Later speaking to media persons at party office on Tuesday, the Minister said that Naidu is the only Chief Minister in the entire country who has taken a daring decision to abolish tax on autos and tractors. Several people are eking livelihood as auto and tractor drivers.

With the abolition of tax to autos and tractors, the drivers have expressed satisfaction and thanked the Chief Minister. The opposition party leaders are in a State of quandary with the initiatives taken by Naidu.

Speaking about Nitin Gadkari, the Minister said, Gadkari was also in a state of shock after viewing the rapid progress in the construction of Polavaram Project. Gadkari has expressed happiness over the ongoing works and has appreciated Naidu for his tireless efforts in completing the project. Unfortunately, Jagan and other aides of Modi are spreading false rumours on the Project, stated NMD Farooq.

Recalling the decisions taken by the former Chief Minister and the founder of Telugu Desam Party, Nandamuri Taraka Rama Rao, Farooq has said that NTR after assuming the charge of Chief Minister in 1983 had also abolished life tax on cycles and bullock carts.

Following the footsteps of NTR, Naidu has also abolished life tax on autos and tractors. People of all sections are benefitting from the welfare schemes being introduced by the Chief Minister Chandrababu Naidu, said the Minister for Health and Education.

Later in the evening, the Minister also laid foundation for the renovation of Gynaec ward with a cost of Rs.3.15 crores at General Hospital. He said that the general hospital would extend services on par with the corporate hospitals. Under NTR Arogya Sri around 1046 diseases would be treated at the general hospital. He also assured of sanctioning Rs.10 lakhs for renovating the Lecture Hall (Auditorium).