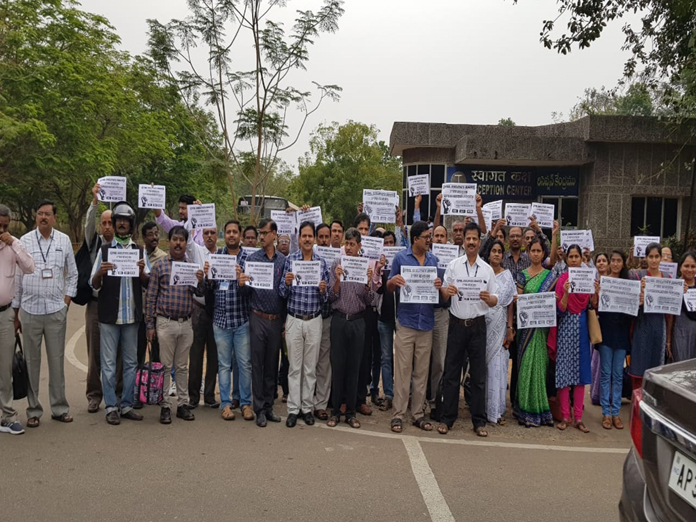 Visakhapatnam: As per the call given by Steel Executive Association (SEA) and Steel Executive Federation of India (SEFI), 6,300 executives working in Visakhapatnam Steel Plant observed silent protest at Administrative Building, Area offices, HoD offices and VSGH against delay in implementation superannuation benefit scheme as per second PRC DPE guidelines from January 1, 2007 and non-implementation of third Pay Revision in Steel PSUs for executives.

Employees in the cadre of junior managers to general managers and HoDs participated in the protest and expressed their dissatisfaction against government discrimination towards the executives working the Steel Public Sector Undertakings (SAIL and RINL).

Speaking on the occasion, SEA general secretary K Chandra Rao appealed to government to take the cognisance and give relief to the unrest and dissatisfied executive fraternity of the steel PSUs before PMO rally on February 4 by declaring removal of affordability clause and implementation of second PRC superannuation benefit (pension) scheme failing which the government may see more aggressive faces of executives who are aggrieved and deprived of their righteous third Pay Revision and second PRC superannuation benefit.

SEA leaders Harbhajan Singh, KVD Prasad, Leela Srinivasa and executive members monitored the silent protest of executives in various zones of RINL and appealed to executives to participate in large numbers at PMO Rally on February 4 to hear the plea of the Steel PSU executives.