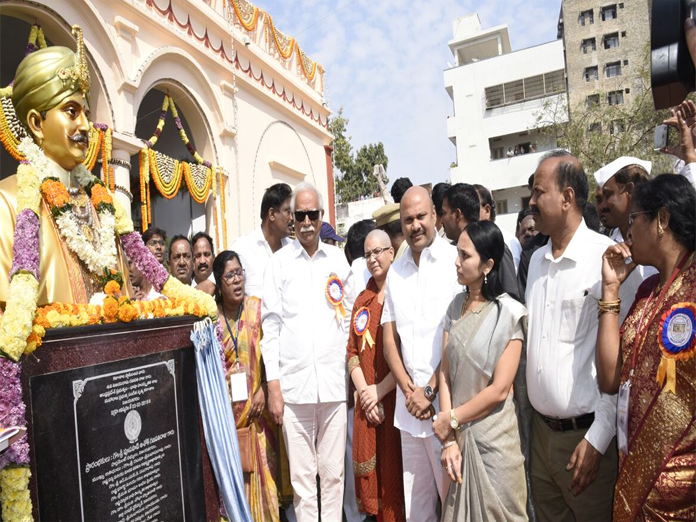 The town along with fort, Sanskrit College and other historical places were filled with people as the threeday centenary celebrations of legendary Maharaja Music College began here on Sunday

Vizianagaram : The town along with fort, Sanskrit College and other historical places were filled with people as the three-day centenary celebrations of legendary Maharaja Music College began here on Sunday. The streets and main junctions were reverberated with music and vocal songs as hundreds of music lovers connoisseurs roamed the streets there to listen to the music and recollecting their memories with the town.

The centenary celebrations were formally launched by MP P Ashok Gajapathi Raju and district in-charge minister Ganta Srinivasa Rao. A Sobha Yatra was organised between from the fort to Music College to mark the occasion. A huge number of musicians participated in the Sobha Yatra playing Dolu, Sannayi, Veena, violin and other instruments.

Hundreds of school students and alumni of music college took part in the programmes. A statue of Vijayarama Gajapathi Raju, founder of the music college, was unveiled by Ashok Gajapathi Raju. Various cultural programmes are being organised on the premises of the historical college. Later, addressing the gathering, Ganta Srinivasa Rao said that the event would be part of history for ever and make Andhra proud.

“I will spare no effort to make Vizianagaram the cultural capital of Andhra Pradesh. Our government is giving top priority to protect art and culture. A school in Ajjada village of Balijipeta mandal will be named in memory of Aadibhatla Narayana Dasu, the first principal of the music college and Harikatha Pitamaha. The government has released Rs 90 lakh to renovate the college and Rs 2 crore for this three-day centenary celebrations.

We will release funds to construct staff quarters on the college premises,” He said. Minister for mines and geology R V S K Ranga Rao said that the music college was pride of the district . It would spread its musical aroma for next 100 years, he said. District collector M Harijawaharlal and others participated in the programme.