Modi takes on Chandrababu Naidu, calls him a senior backstabber 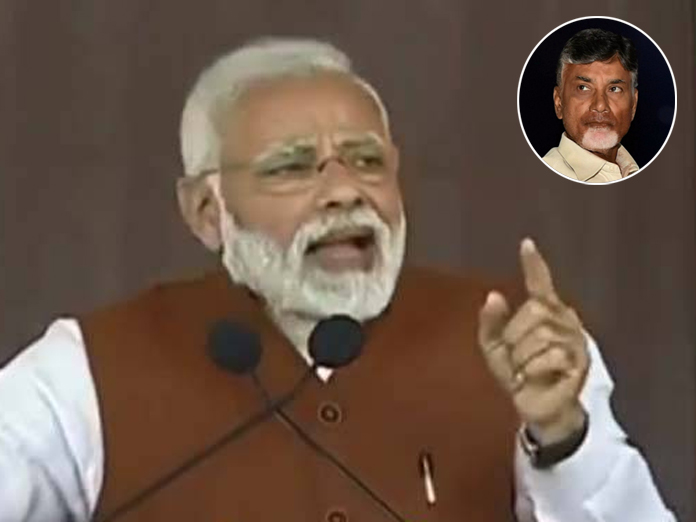 Prime Minister Narendra Modi took a dig at Andhra Pradesh chief minister Chandrababu Naidu, saying that Babu who promised to develop the state has taken Uturn and engaged in his own development

Prime Minister Narendra Modi took a dig at Andhra Pradesh chief minister Chandrababu Naidu, saying that Babu who promised to develop the state has taken U-turn and engaged in his own development.

Addressing the Praja Chaitanya Sabha in Guntur, Modi said that Chandrababu who has left the people of the country in smoke is now trying to spread it throughout the country with his lies by joining the competition of abusing the prime minister.

Calling him as a senior, the PM said that Naidu had back-stabbed TDP founder and his father-in-law NT Rama Rao. "Naidu might have promised to deliver NTR wishes and follow his footsteps, but is he respecting him," Modi questioned adding that Naidu who is scared of losing the elections is trying to bring his son into politics.

The prime minister also responded to the hoardings of 'Modi go back' put up across the state saying that he will go back to Delhi and take up the power again.

"Naidu who is planning to come to Delhi for a protest have to give the details of his expenses in New Delhi to people of Andhra Pradesh," said Modi. He also said that the centre has released adequate funds in the past 55 months for the development of the state but the funds were never utilised for the AP development.

He also said that the centre has worked on the AP reorganisation act-2014 through which 11 educational institutions including IIT Tirupati, Anantapur Central University, IIM Vishakapatnam, AIIMs in Mangalagiri have been sanctioned.