Rahul Gandhi will ensure basic income to everyone: AP Congress 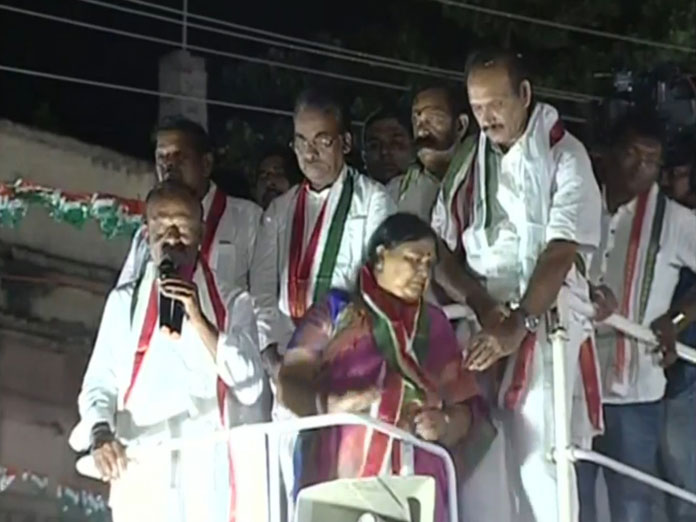 Ongole: The Andhra Pradesh Congress Committee president N Raghuveera Reddy announced that the AICC president Rahul Gandhi designed a scheme to see every person in the country gets a minimum income as a right.

The AP Congress leaders’ Pratyaka Hoda Bharosa Yatra was welcomed here on their sixth day of the tour on Sunday evening by the Prakasam DCC president Eda Sudhakar Reddy and hundreds of their party workers.

In the meeting, Sirivella Prasad accused Prime Minister Narendra Modi of failing to keep his promises like Special Category Status to the state, two crore jobs, etc., and of ruining the lives of public with demonetisation and GST. He also accused Modi of destabilising the democratic institutions like CBI, Supreme Court, Election Commission. He said that Rahul Gandhi promised in the Tirupati meeting that he would sign on the SCS to AP file as soon as he becomes the prime minister.

Raghuveera Reddy said that the Congress party was the only party that could give Special Category Status, jobs, 90 per cent of the funds for schemes, relief from the loan burden on the state, funds for Polavaram project, Kadapa steel plant, Visakha railway zone, port, funds for capital, Rs 2 lakh loan waiver for farmers, Rs 2lakh for self-help group women, funds for 12 national institutions, free gas cylinder for every three months among others sops.

He said that the regional parties cannot provide them and the BJP has already cheated the people. The PCC chief said that the Congress would also provide funds for the Veligonda project and include the Prakasam district in the backward districts list to help it develop by providing enough funds.

He asked the public to not vote for the TDP, YSRCP or BJP but vote only for the Congress as it is the only party that will keep its promises and give special category status to the state.