Alienated in their own lands, agony haunts tribals 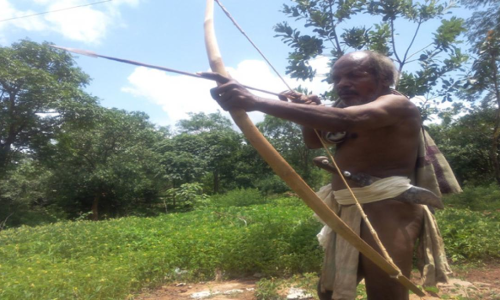 Notwithstanding the safeguards envisaged under the Fifth and the Sixth Schedule of the Indian Constitution for the protection of tribal cultural distinctiveness, the aboriginals, over the decades, have been dispossessed from their habitats, thus leading to the disruption of their culture and traditions. Virtually, the largely self-sufficient tribal people, who were in fact self-governing once upon

​Hyderabad: Notwithstanding the safeguards envisaged under the Fifth and the Sixth Schedule of the Indian Constitution for the protection of tribal cultural distinctiveness, the aboriginals, over the decades, have been dispossessed from their habitats, thus leading to the disruption of their culture and traditions. Virtually, the largely self-sufficient tribal people, who were in fact self-governing once upon a time, were reduced to wage earners with an uncertain future.a

Despite the fact that rights of tribals over forests are inalienable and irrefutable, these subjugated tribal groups have been facing a systematic dispossession over a period. With the Centre playing the role of a mute spectator, the States have shown self-serving negativism.

The problems of tribals are still about access to basic needs, this even after 68 years of Independence and reinforcement of several forest laws such as Panchayat Extension to Scheduled Areas Act, 1995 (PESA), and Scheduled Tribes and Other Traditional Forest Dwellers (Recognition of Forest Rights) Act aka the Forest Rights Act (FRA).

Millions of forest-dwellers, who believed that their inherent and democratic rights over the forests were finally going to be restored through PESA and FRA, are yet to taste the fruits of these legislations. On the other hand, while a large number of tribal communities have moved away from their natural habitats either to fulfil their educational or occupational aspirations, the remaining people live a devastated life either next to an operational mine or a dam or an industrial unit.

Though the Fifth Schedule has vested powers in Governors to protect the interests of Adivasis, it is very common that the Centre and State laws override jurisdiction of the Schedule areas. Many groups, especially the Particularly Vulnerable Tribal Groups (PVTGs) which include Chenchus and Baigas in Dandakaranya region, are struggling for existence and as a result their numbers are dwindling rapidly.

On the other hand, the growing dissonance between the Podu cultivators and the State seems to be reaching a flashpoint in the tribal pockets of Khammam district with each passing day. However, the Podu issue has been there for decades, and the State’s perception about the rights of tribals over the forests has not changed.

Of the 4.11 lakh tribal community people applied for the grant of rights over land to the extent of nearly 11 lakh acres in Telangana districts, the government gave away pattas for 3.11 lakh acres to 1.69 lakh applicants, according to people’s forum leaders.

Speaking to The Hans India, Adivasi Girijana Sangham State president and Bhadrachalam MLA Sunnam Rajaiah said, “The State needs to be sensitive and compassionate towards Adivasis in ensuring their rights over forests.” He demanded that the government withdraw cases against the innocent tribals.

The CPI-ML New Democracy Khammam unit secretary Potu Ranga Rao said, “Since the British started regulating the forests in the second half of 19th century, a grave injustice is being meted out to Adivasis in continuum.” It is high time for the rulers to focus on the issues faced by the tribal communities rather than on corporate and industrialists to whom the government is bestowing lakhs of acres, he added.