Romancing in the rain 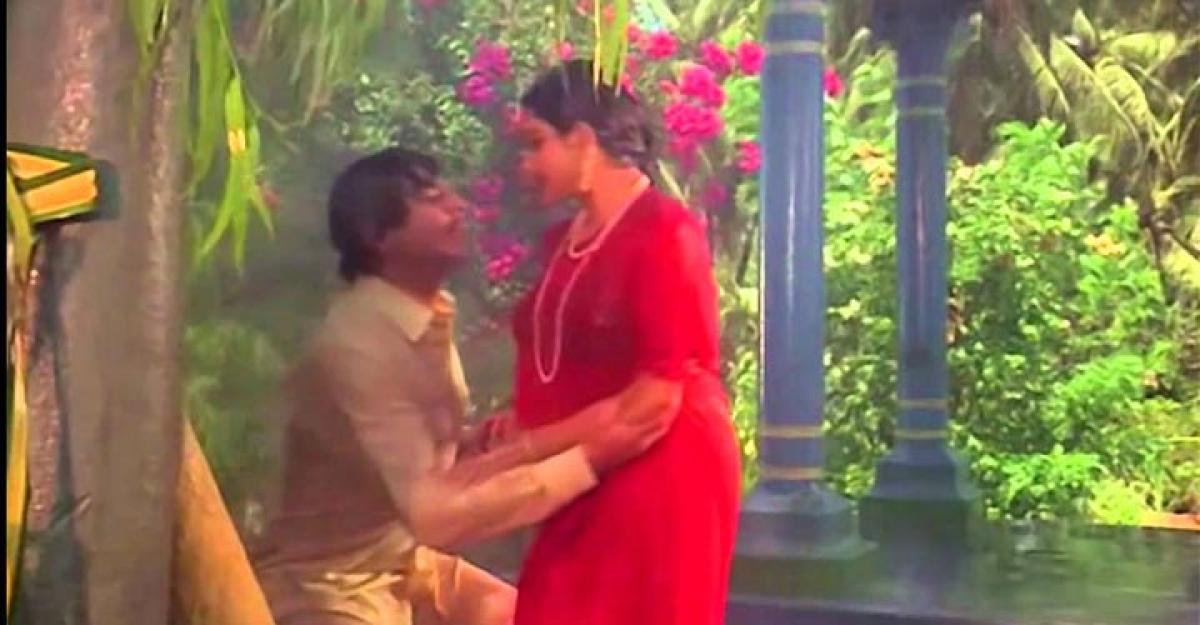 Poetically titled, ‘Pyaasa Sawan’ is a 1981 release, which had Jeetendra and Moushumi Chatterjee in the lead. A remake of the ANR hit ‘Yedanthasthula Meda’, it was among the first of the many Telugu film remakes that ‘Jumping Jack’ pranced around in all through that decade with heroines, one more bewitching than the other, for company.

In many ways, it is a no-brainer. When the song begins with the opening line “Megha Re Megha Re”, it obviously is going to be water, water everywhere right? Of course, with budget- friendly, schedule- conscious directors like Dasari Narayana Rao at their creative peaks, such numbers as assembly-line components of Hindi cinema are just par for the course.

Poetically titled, ‘Pyaasa Sawan’ is a 1981 release, which had Jeetendra and Moushumi Chatterjee in the lead. A remake of the ANR hit ‘Yedanthasthula Meda’, it was among the first of the many Telugu film remakes that ‘Jumping Jack’ pranced around in all through that decade with heroines, one more bewitching than the other, for company.

Laxmikant Pyarelal, the masters when it comes to semi-classical tunes and appropriate orchestral efforts to go with it, just let it go in their comfort zone. The lead pair, in their ‘30s, seems too pat, with plaited hair and traditional dressing for the heroine while the whites-loving hero has a neat, yet dour kind of an appearance.

Employing the classically-trained Suresh Wadkar- Lata Mangeshkar duo, the song takes off with practiced ease. Both Jeetu and Moushumi keep looking up at the clouds, taking turns to indicate that this song is all about their appeal to the clouds to stay where they were and if possible, carry the message of love to each other.

Shunning fancy locales, a plethora of junior artistes and smart cinematography, the song, remains confined to overexposed locales in known places like Chennai beach and its suburbs. Strangely, Dasari makes the heroine do all the hard work- the drenching in the rain included!- as she is shown more than twice running from a distance to sink into the hero’s arms- which is repetitive and betrays a lack of imagination, as far as shooting a duet goes.

Given the sweet, homely image that Moushumi had, the song keeps her in the love mood in a sedate sort of way till the rain interlude adds to the steamy quotient. Here is where the director transports the techniques he employed with his heroines back home into Hindi too, to up the eye candy portion of the song for the male audience.

Santosh Anand’s lyrics go on in a mushy manner: “kahan se tu aaya, kahan jayega tu, prem ki aggan mein pigal jayega tu…” as the Bong bombshell is spun around on a wheel, a strange way of serenading the lady in question! Close-up shots of water bodies brimming with water are repeated, giving a wet feel to the ambience.

A sweet combination of flute, table and sitar running across the song, accompanying the percussion and cropping up as strident interludes fit snugly with the voices of the playback singers, hugely experienced and popular. As a number, it is one which has withstood the rigours of time for nearly four decades, which is its shining USP!