Boys in bondage, burnt and beaten 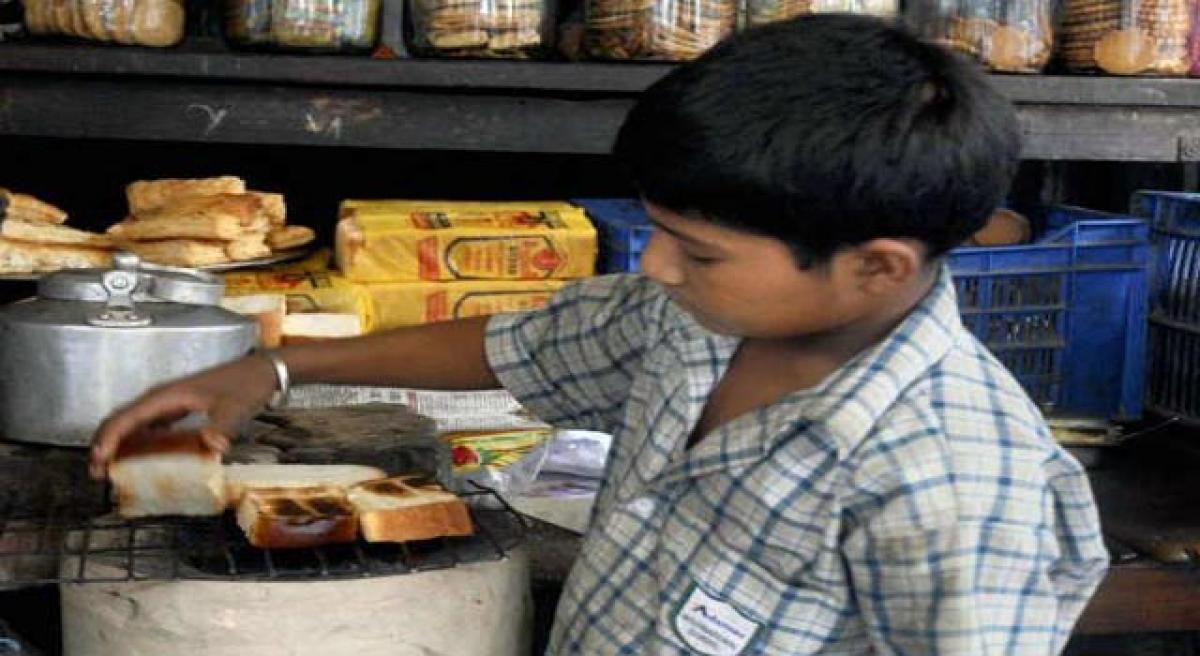 A festering wound on Vijay Kumar\'s thigh is a constant reminder of the four years the teenager spent behind a hot wok frying sweets and savouries. It reminds him of the day the food shop owner beat him with a metal rod and poured hot oil on his legs to punish him for adding too much food colouring to the samosas he was making.

A festering wound on Vijay Kumar's thigh is a constant reminder of the four years the teenager spent behind a hot wok frying sweets and savouries. It reminds him of the day the food shop owner beat him with a metal rod and poured hot oil on his legs to punish him for adding too much food colouring to the samosas he was making.

"I had put up with everything for four years," said Kumar, who is due for a surgery in a couple of weeks to try to save his leg from amputation. Kumar was 15 when he was sent to Maharashtra State in western India from his home in Dindigul, Tamil Nadu, in 2012 after his mother was paid Rs 15,000.

Boys in the southern state are systematically targeted and trafficked to western and northern India, trapped in terrible conditions for little pay and often abused in their workplaces, say campaigners. "I couldn't go home for both my sisters' weddings or when my grandfather died," Kumar said. "I ignored the everyday abuse, the frequent burns from the hot oil. But that day, it became unbearable."

So in September 2016 Kumar escaped from the shop in the early hours of the morning. He travelled without a ticket for three days to get home to his village in Dindigul.

Wretched living
Labour agents draw in cheap labour - mainly teenage boys from poor, illiterate and low caste or "Dalit" communities - and offer lump sum payments to the family at the end of each year. School dropouts in the districts of Theni, Madurai and Dindigul have been regularly taken to north and west India to work in food shops, campaigners say.

"In our random survey of just 30 villages in Dindigul, we found 122 children had gone out to work in these units," said S Annadurai of non-profit organisation Child Voice. "In 20 per cent of the cases, the parents did not know where the child was taken. They are just missing." On Monday, the Tamil Nadu government received two petitions asking to help free three children said to be in bonded labour in the sweet and savoury making workshops.

"We have formed a team to look into the cases," said K Veera Raghava Rao, administrative head of Madurai district. In 2011, more than 40 boys from Tamil Nadu were rescued from different states in north and west India. It was the first time the extent of abuse and bondage was known, an investigating officer said, requesting anonymity as the case is still in court.

"They were rescued from single room factories with partially or fully burnt fingers. They were given minimum food, no access to their families and hardly paid. It was the most wretched type of living," he said.

Homesick
Surya Prakash worked with Kumar. They were both taken by an agent to Maharashtra. Others, some as young as 10, are taken to Gujarat and Uttar Pradesh. The boys were woken up at five in the morning and worked till late into the night, deep frying snacks and making sweets before packing them.

"In a day we would make 75 kg of gulab jamun and balushah (traditional Indian sweets) and fry sacks of appalam (crisps)," Kumar told the Thomson Reuters Foundation sitting outside his home in Soundarapuram village in Dindigul. "We used to be homesick and wanted to come back, but they didn't let us."

For the four years that they were there, the boys were given no money nor allowed to go out unescorted. Phone calls back home were through the owner's telephone. A relative of the shop owner would periodically pay their families small amounts. The boys slept in the room where the food ingredients were stored. They spent all their waking hours over a hot pan or hunched over trays of sweets, cutting and packing them.

Prakash is currently missing. The shop owner has been arrested based on a complaint filed by Kumar. Two other suspects in the case are still at large, police said. Amudha Palanisamy sent her 15-year-old son to work in a snack shop in 2014. She hasn't seen him since and doesn't know where he was taken.

She took an advance of Rs 10,000 and says she has been sent Rs 70,000 in the three years since. "They said I could either see him or take the money," Palanisamy said. In effect, the boys' monthly salary comes to just about Rs 2,000 said Annadurai of Child Voice. "For that little, they are trafficked and kept in bondage for years," he said.