A unique collection that wows 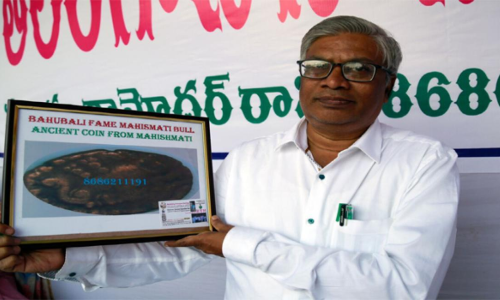 Many people may take it for granted that the blockbuster movie Baahubali’s Mahishmati Empire was fictional – something created by the director Rajamouli.

Hyderabad: Many people may take it for granted that the blockbuster movie Baahubali’s Mahishmati Empire was fictional – something created by the director Rajamouli.

But Musham Damodhar Rao, an epigraphist and numismatist, has claimed that Mahishmati indeed existed in history and extended over an area located on the border of Karnataka and Andhra region. Damodhar even flashes what he claims is one of the rarest coins that belonged to Mahishmati Empire.

As part of the World Telugu Conference, Damodhar has put up a stall displaying coins, currency notes and firmans of Telangana of various periods and various dynasties. The stall is attracting visitors at LB stadium.

Speaking to The Hans India, Musham Damodhar Rao said on Saturday that he has a rare Gobada coin belonging to 800 BC, which has unique Brahmi script. “Generally, people think that Ashoka was the first person to use Brahmi script on rock edicts.

But, the Gobada coin has Brahmi script of geometrical pattern. The Ashoka Brahmi script is in curves form,” he said. It shows that Telangana region Gobada king coins were made earlier than those of Ashoka period, he said. He claims that no museum in the world has a geometrical Gobada coin.

He has a firman of Aurangzeb. After conquering Golkonda, Aurangzeb had given many forts to local sardars for 500 or 1000 dinars as yearly shisthu. Damodhar has a farman of Devarakonda that was given by a particular Sardar for region that stated 1000 dinar.

Damodhar said many Satavahana coins were made up of nine different materials and all coins have corroded. Due to this, the script dissipated. He learned Brahmi script to read script on the coins of Satavahana. The prized exhibits are divided into various categories like ancient coins, modern coins, Telugu Coins, Muslim coins, Hyderabad Nizam coins and currency notes of Hyderabad.

Firman is in a different category, displayed in a separate box. One of the unique features of the exhibition is that a dagger copper coin of the 16th century that was issued when Hyderabad was founded by Quli Qutub Shah. It was issued a coin to commemorate the founding of Hyderabad.

Behind the coin, Urdu inscription says “Farkhunda Buniyad meant (Happy Foundation of Hyderabad city)”, Damodhar said. Further, he said, before Gobada kings, the Naga kings had ruled Telangana region. Their coin has nothing but, lines, minus, plus, commas.

This script was never decoded. They were the first rulers of Telangana, he added. Regarding Hyderabad’s one-rupee silver coin of Nizam era, he said the unique feature of the coin is that it does not weigh 10 grams, but 11.6 grams and is also called old Tula. During that time, if Britishers gave 100 coins of Nizam rupees, they used to give Rs 125 of their coins. This shows how strong the Hyderabad Nizam economy was.