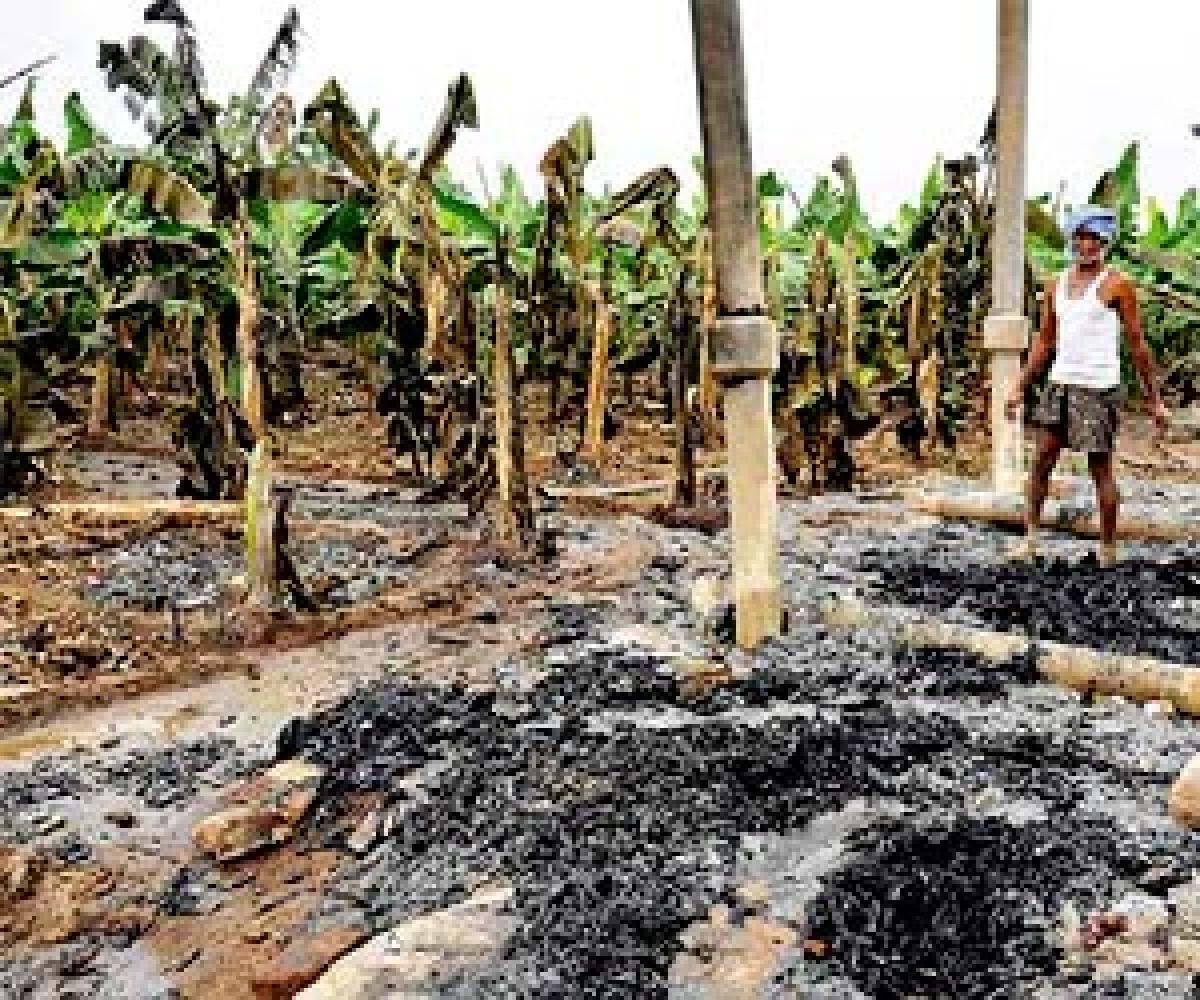 The Union Government’s move to dilute the Land Acquisition Act by way of ordinance has confounded the farmers of Jaribu land (river bed land).

The Union Government’s move to dilute the Land Acquisition Act by way of ordinance has confounded the farmers of Jaribu land (river bed land). The loud thinking of a few leaders in ruling party that they would have to resort to land acquisition if farmers do not agree to land pooling have increased their fears.

The incidents in the proposed capital region of Thulluru reveal a portentous trend in democratic polity and governance. The ruling party and the opposition are on an immediate political blame game completely diverting the attention from the actual problems on the ground. Politicisation of governance would hurt the people whether or not it yields dividend for the parties engaged in political warfare.

The nature and character of the incident clearly reveals a pattern. The Andhra Pradesh DGP saw a conspiracy in the whole event. None can dispute with him though there can be divergent opinion on who hatched the conspiracy. This cannot be an act of few lunatic elements. The incident has occurred in the villages in the river bed or Jaribu lands where the resistance to land pooling is the strongest. Therefore it cannot be dismissed as a sporadic or isolated event but certainly an act aimed at influencing the very process of land pooling.

The Vijayawada police came out with an expected official statement after the incident. But, ministers, including the Deputy Chief Minister who handles the police, acted with remarkable alacrity to come to a conclusion that the deplorable act was done by the activists of the main opposition, the YSR Congress Party. This raises many questions. How can the Home Minister come to such a sweeping conclusion even before police is in full control of the situation? Can the Home Minister decide the culpability even before the police conducts any preliminary investigation? Will it not hamper independent, free and fair investigation? Even if the police do so, will the statements of ministers, including the political boss of the police, put a big question mark on the credibility of the investigation? These are the few perplexing questions that immediately come to anyone’s mind. The opposition party also joined in this political cacophony.

The YSR Congress Party leaders, while raising similar questions, went on to make wild allegations against the ruling party, including the Chief Minister. The principal opposition leaders wanted us to believe that the Chief Minister himself planned and executed such lumpen acts of violence and vandalism. Nothing can be more ludicrous than this. The preposterous stand of the YSR Congress Party is its attempt to link this incident with Chief Minister’s statements on land pooling vis-a-vis land acquisition. Such irresponsible remarks would only disarm the opposition and absolve the ministers who made irresponsible statements that were loaded with political intent.

This violence has a clear objective. It aims at instilling a fear psychosis in the farmers opposed to land pooling. Such an attempt to pool land is absolutely unacceptable. The State has a basic responsibility to maintain law and order. It cannot run away from its responsibility even though such acts are the handiwork of non-state actors who have political or economic interests in governmentsponsored land pooling. The government and the political parties should first focus on giving confidence to the farmers of these river bed villages.

They have their genuine ground for opposing land pooling. The blame game would further accentuate political acrimony that already prevails in the capital region. Such a grand capital cannot be built on people’s agony and undesirable political one-upmanship. The farmers in the river bed villages are not ready to give up their prosperous agriculture. They are in no mood to accept marginally higher compensation as compared to the lands in dry land area. The attractive recurring income in these river bed villages that grow many horticulture crops is the reason for this. High employment intensity of the agrarian economy of the river bed further compounds the problem.

The Union Government’s move to dilute the Land Acquisition Act has further confounded these farmers. The statements by the ruling party leaders that they would have to resort to land acquisition if farmers do not agree to land pooling have increased their fears. Now the recent incident further bewilders the local population. Democracy and land pooling need not be mutually exclusive. There is a need to strike a balance between development and displacement.

Food security cannot be sacrificed at the altar of magnificent urban development. An urban habitat planning that balances divergent interests is certainly possible if political interests are not allowed to vitiate the atmosphere. Unfortunately, the political landscape of the new state of Andhra Pradesh seems to be at variance with this objective. Any discourse on governance and development is clouded by politics. Though this is unavoidable in an electoral democracy, the concern is that it reached an obnoxious proportion in Andhra Pradesh that requires a concerted effort to revitalize the state in the post bifurcation period.