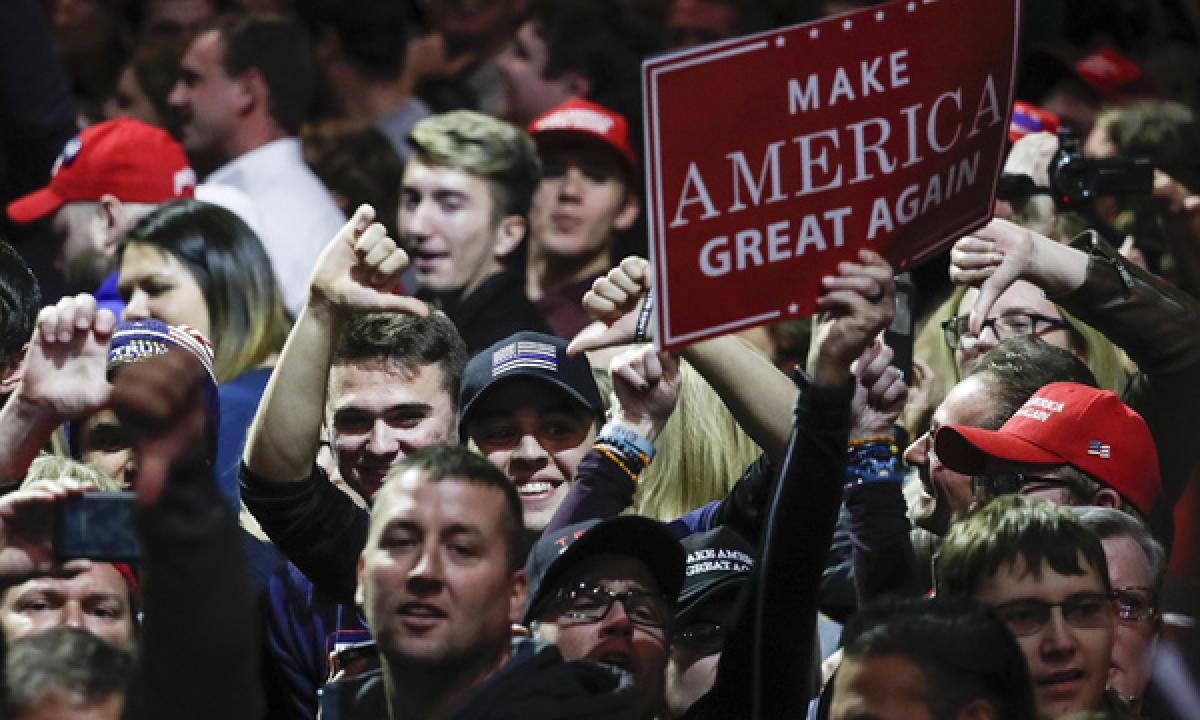 Most young Americans are concerned about the media\'s ability to report on Donald Trump and his efforts to obstruct coverage of his administration, and most think it\'s at least somewhat likely he will make it harder for Americans to express dissent. That\'s according to a new GenForward poll of Americans aged 18 to 30, nearly two-thirds of whom say they\'re either very (25 percent) or somewhat (38 pe

New York:Most young Americans are concerned about the media's ability to report on Donald Trump and his efforts to obstruct coverage of his administration, and most think it's at least somewhat likely he will make it harder for Americans to express dissent.

That's according to a new GenForward poll of Americans aged 18 to 30, nearly two-thirds of whom say they're either very (25 percent) or somewhat (38 percent) concerned about Trump trying to impede journalists as they report on his incoming administration.

"I am really concerned that Trump tries to muddy the waters, that his attitude is to try to block the press from doing their job," said Becky Berenbon, 22, a graduate student who lives in West Bloomfield, Michigan. "I think the media will try to hold him accountable, but he will do what he can to stop them."

GenForward is a survey of young adults by the Black Youth Project at the University of Chicago with the Associated Press-NORC Center for Public Affairs Research.

Most young people in the poll said Trump is likely to make dissent and protest more difficult. Twenty-two percent are very confident he will do so, and another 36 percent say they're somewhat confident. More than 7 in 10 young people say they have little to no confidence that Trump will show respect for people he disagrees with.

"I don't think he'll outwardly limit free speech. But I think (the Trump administration) will limit or not acknowledge people's opinions they disagree with," said Desiree Batista, 22, a college student from Woodbridge, New Jersey. "There will be a rise in different protest movements, but I don't know how the administration will view it. And I also think that he thinks all press is good press, even if it's people smack-talking him."

Eileen King, a 23-year-old waitress from Norfolk, Virginia, who backed independent candidate Gary Johnson in last year's election, said she didn't trust the media, preferring to get her news from a diverse set of conservative and liberal friends on Facebook.

"I don't know that the media will give him a fair shake, but I also don't think it matters," King said. She said her biggest concern would be that an unfettered Trump would ignore the media's traditional role of a watchdog and "present an ugly face to the world."

Trump made the media part of his campaign in an unprecedented way, using his celebrity along with a penchant for saying the outrageous - to draw hours upon hours of free coverage. But he is also quick to condemn news reports he does not like.

During his campaign, Trump incited his rally crowds to boo reporters, singling out individual journalists with derogatory names such as "sleazebag." Last week, during his first news conference as president-elect, he lashed out at a reporter from CNN and refused to field a question from the network.

Batista, for one, said the media spent far too much time on Democratic presidential nominee Hillary Clinton's use of a private email server and not enough time examining Trump's background. But many Trump supporters cheered the candidate's harsh treatment of the media. Saleena Dayani, a 20-year-old student from Fayetteville, Georgia, said journalists' coverage of the president-elect has been "the opposite of fair."

"The major networks like CNN are totally unfair to him," said Dayani, who voted for Trump. "They look at one bad thing and they want to stretch it like a piece of gum. They are only focusing on negatives and not the positives."

Trump's transition team has signaled it wants to shake up how the White House press corps will cover the new administration, floating the idea of doing away with the press secretary's daily briefing or moving it to a more spacious location outside the building.

The head of the White House Correspondents' Association has called any move to push reporters out of their White House workspace "unacceptable."

"I imagine the media will do their best," said Alice Ma, a 19-year-old student from Jupiter, Florida. "But that might not be good enough."

The poll of 1,823 adults age 18-30 was conducted Dec. 9-12, 2016, using a sample drawn from the probability-based GenForward panel, which is designed to be representative of the U.S. young adult population. The margin of sampling error for all respondents is plus or minus 4 percentage points.

The survey was paid for by the Black Youth Project at the University of Chicago, using grants from the John D. and Catherine T. MacArthur Foundation and the Ford Foundation.