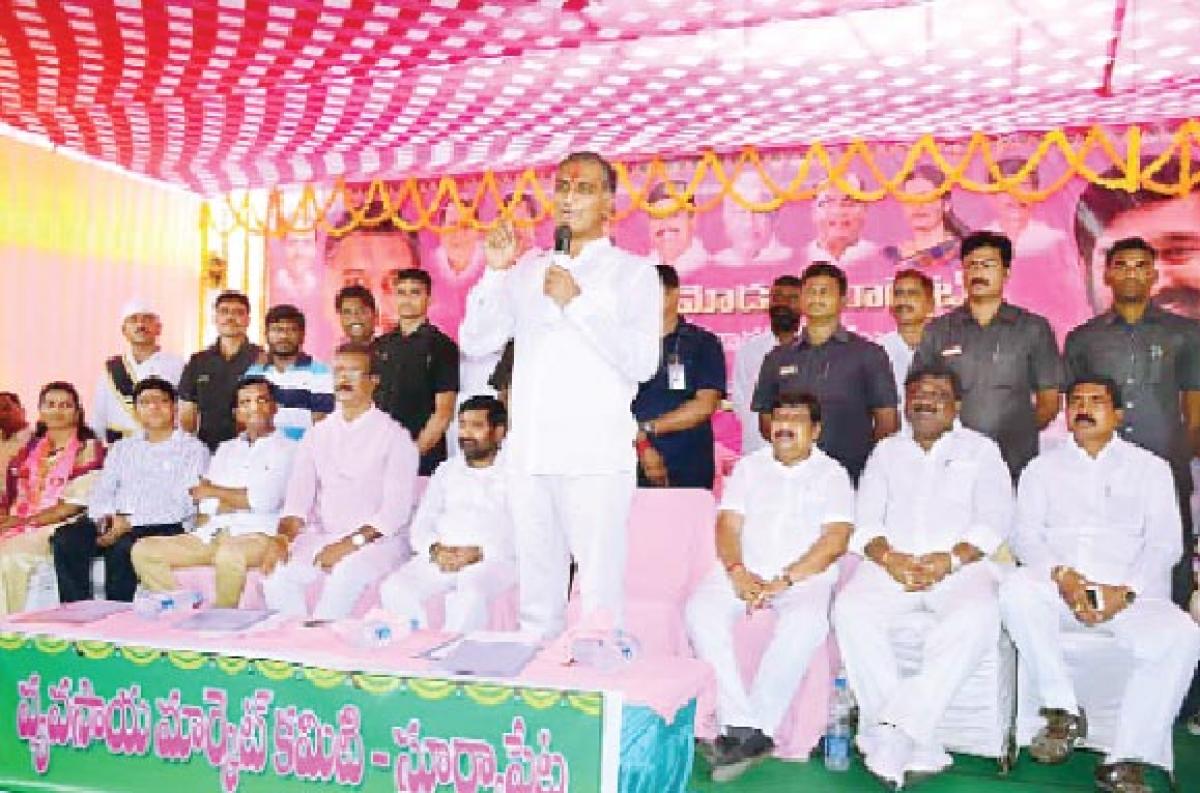 The Minister questioned as to when he was Minister in Congress government, why the TPCC Chief Uttam Kumar Reddy did not even thought about Dindi Lift...

Nakrekal (Nalgonda)/ Suryapet: Minister for Irrigation and Marketing T Harish Rao on Monday strongly criticised the Congress leaders for trying to create hurdles in the path of Irrigation projects by provoking people on land acquisition.The Irrigation Minister has laid foundation stones to Mini Tank Bund at Pedda Cheruvu and Lemon Market in Nakrekal on Monday. Speaking at a public meeting later, which was organised on the occasion, Harish said Congress leaders have been deliberately trying to provoke people against irrigation projects on land acquisition and approaching courts to create hurdles in the path of development.

The Minister questioned as to when he was Minister in Congress government, why the TPCC Chief Uttam Kumar Reddy did not even thought about Dindi Lift Irrigation Project. He alleged that Uttam Kumar Reddy has also extended cooperation for then YSR government for completion of Pulichinthala project, which has submerged 14,000 acres land and 17 villages in Nalgonda district, but not provided irrigation facility to a single acre of land in Telangana. He made it clear that the Congress leaders had no moral right to talk about farmers’ welfare.Musi modernisation with `285 crore

Stating that Chief Minister K Chandrashekar Rao was giving top priority to the repair and development of canals, Harish announced that Rs 285 crore would be soon sanctioned for modernisation of Musi and its canals. Showering soaps on Nakrekal Assembly constituency, Harish announced a Rythu Bazar to Nakrekal and also a lift irrigation scheme at Aitipamula to provide irrigation facility to Kadaparthy, Nomula, Nellibanda and Cheruvu Annaram villages.

The Minister for Power and SC Development G Jagadish Reddy stated that State government was ensuring transparency in implementation of welfare schemes with the public participation. The process of tenders for double bedroom scheme would be completed in October and beneficiaries would be selected with the consent of local MLAs, he added.The Deputy Chairman of Legislative Council, Nethi Vidhya Sagar, Bhongir MP Boora Narsaiah Goud, Zilla Parishad Chairman Balu Naik, Chairman of Telangana State Forest Development Corporation Banda Narender Reddy and others attended the programme.

Coronavirus toll in China rises to 2,118