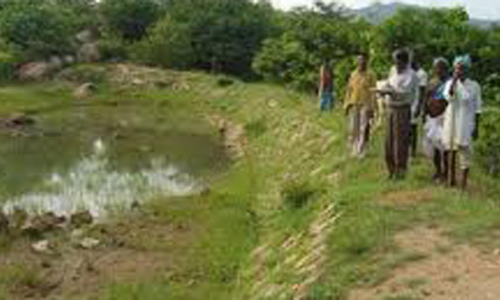 The mini tank bund works initiated by the state government to promote tourism and recreation in all the major towns, districts and cities across the state is being to be delayed in Mahbubnagar district since past 23 years now

Mahbubnagar: The mini tank bund works initiated by the state government to promote tourism and recreation in all the major towns, districts and cities across the state is being to be delayed in Mahbubnagar district since past 2-3 years now.

At present, the state government had identified about 11 major lakes and tanks across erstwhile Mahbubnagar and had sanctioned Rs. 44.67 crores for their development. However, even though more than two years have gone, the works on almost all these lakes has been going on at a snail’s pace in the district.

Except for Mahabubnagar district and Nagarkurnool districts, where the construction of mini tank bunds has achieved 70 per cent completion, while the remaining tanks elsewhere in Wanaparthy, Gadwal and Narayapet mandals the works have not even completed to 20-30 per cent.

“The main concept behind the conversion of major lakes and ponds in the urban areas into min-tank bunds is to encourage tourism and at the same time provide better environmental conditions to the urban dwellers, where they can come and spend their leisure time on the mini-tank bunds in a peaceful and jolly way by enjoying the beautify of the lake water, greenery and also enjoy the boating, water games etc,” informed Srinivas Goud, Mahbubnagar MLA.

“In Mahabubnagar, the Nallacheru Lake which is located in the middle of the town has been totally renovated. Recently, the government has sanctioned some more funds to develop further the lake similar to Hussainsagar in Hyderabad.

We are soon planning to construct a necklace road, for which the government has already accorded permission and even funds are also sanctioned and by the next year we will be able to complete the necklace road surrounding the Nallacheru Mini-Tank bund,” he said.

Earlier, the government had sanctioned Rs. 4.94 crore for the Mahbubnagar mini-tank; however these funds were sufficient only to construct the 2-3 kilometre bund renovation and laying of the CC road along with erection of railings.

However, with the Mahbubnagar MLA wanting the Nallacheruvu Lake to be developed similar to that of Hussainsagar Lake in Hyderabad for which he had sought KTRs support. If this is succeeded then Mahabubnagar will have a ring road connecting new bus stand to one town police station covering the entire periphery of the lake.

Out of all the 11 sanctioned min-tank bunds in Mahabubnagar district except one or two which had reached 70-90 per cent works, remaining all the other works have not even achieved 20-30 per cent progress.