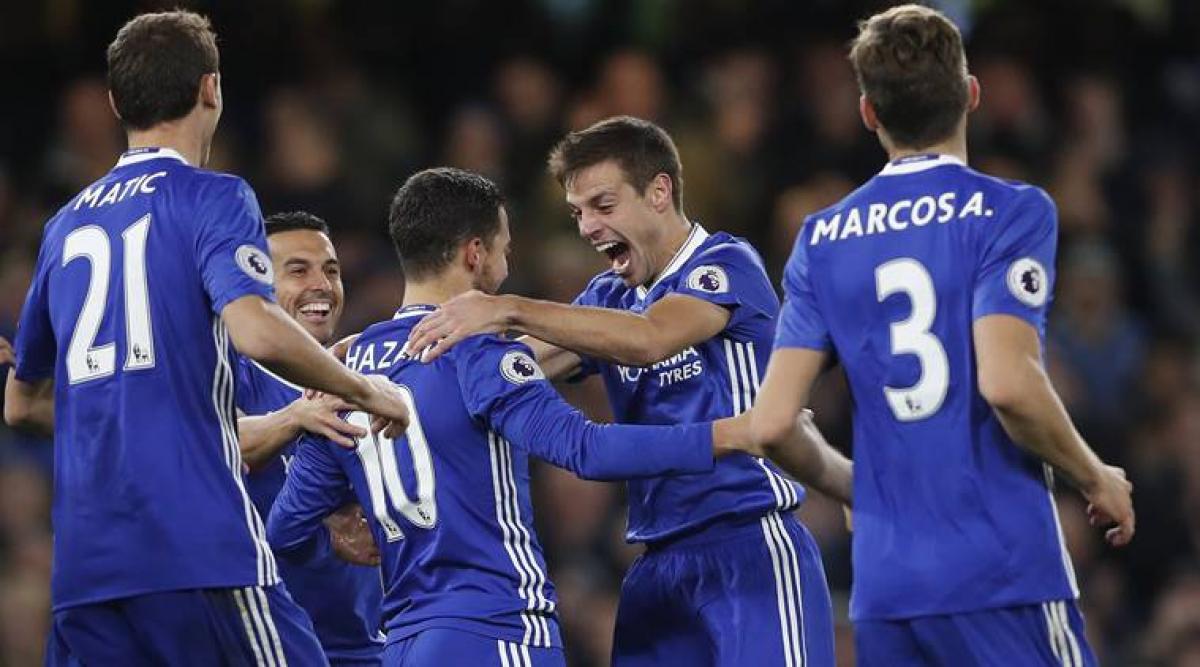 Eden Hazard\'s dazzling double sent Chelsea surging to the top of the English Premier League with an electrifying 5-0 victory over Everton on Saturday.

London: Eden Hazard's dazzling double sent Chelsea surging to the top of the English Premier League with an electrifying 5-0 victory over Everton on Saturday.

Not only was it Chelsea's fifth consecutive league win since a 3-0 humbling by Arsenal, but Antonio Conte's side have scored 16 times without reply while ruthlessly rolling over opponents.

With finesse and exuberance, Chelsea ripped through a brittle Everton side that had the league's second-best defensive record before their Stamford Bridge collapse.

Diego Costa and Pedro Rodriguez also scored, and if they continue to combine so effectively up front with Hazard – and the defensive reliance is maintained – Conte could be ending his first season in English football with silverware.

"Chelsea showed us a very high level of football in every aspect – how aggressive you need to play, the quality on the ball, winning second balls," Everton manager Ronald Koeman said. "We can learn from that."

There's a long way to go, but the transformation of Chelsea from the miserable end of Jose Mourinho's reign last season has been immense.

Chelsea had only three wins and 11 points after 11 games in last season's feeble title defense. At the same stage this year, Chelsea are on 25 points with eight victories, although Arsenal can go top on Sunday by beating Tottenham.

The symbol of Chelsea's revival is surely Hazard, whose morale was at a low ebb last year, but was looking even more dangerous than in Chelsea's title-winning season of 2014-15 when the winger was voted English football player of the year.

Hazard has already eclipsed last season's five-goal haul in the league by taking his tally to seven against Everton, who entered the game in sixth place.

The only surprise was that Chelsea took until the 19th minute to go in front, having scored in the opening seven minutes of the last three games.

On the left flank, Costa passed to Hazard and he cut past Ashley Williams and Seamus Coleman before striking.

Within 25 seconds of the restart, the visitors conceded again, as Hazard and Pedro combined to set up Marcos Alonso, who struck through goalkeeper Maarten Stekelenburg's legs for his first Chelsea goal.

Only the post denied Victor Moses but Costa did grab Chelsea's third before halftime after Nemanja Matic was left unmarked to head a corner into the path of the striker.

By that stage, Koeman had already reverted to a four-man defense having abandoned the three-man backline that has worked so successfully for Conte during the winning run.

The pick of the goals came 10 minutes after the break, with a move that was started and completed by Hazard after a one-two with Moses. Hazard weaved into the penalty area, past Ramiro Funes Mori and Williams, before striking past Stekelenburg.

Costa was the creator of the fifth, winning the ball around the halfway line and darting down the field unchallenged before passing to Hazard. Although Hazard was denied a hat trick by Stekelenburg's save, Pedro was on hand to tap into the empty net.

Everton never even got close to scoring, failing to register a single shot on the easiest of days for Chelsea goalkeeper Thibaut Courtois.