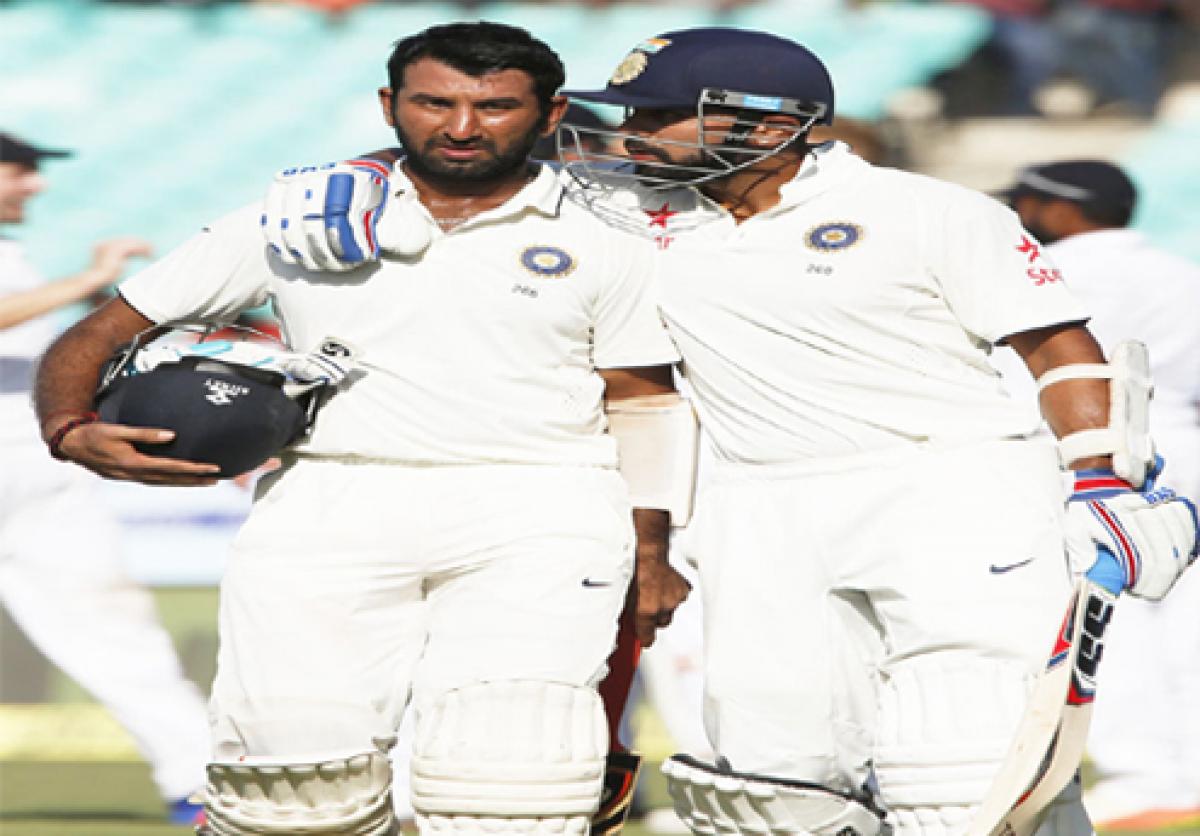 Showing great fortitude in the face of a daunting challenge, Vijay played a typically gritty innings of 126 in 301 balls, while one-down batsman Pujara compiled a more aggressive 124 in 206 balls. The duo forged a huge second-wicket stand of 209 to help India give an apt reply to England\'s massive first innings score of 537.

Rajkot: Murali Vijay and Cheteshwar Pujara led India's determined response to England's mammoth first innings total of 537 as they struck dogged hundreds to guide the hosts to 319/4 on the third day of the first cricket Test here today.

Showing great fortitude in the face of a daunting challenge, Vijay played a typically gritty innings of 126 in 301 balls, while one-down batsman Pujara compiled a more aggressive 124 in 206 balls. The duo forged a huge second-wicket stand of 209 to help India give an apt reply to England's massive first innings score of 537.

England fought back late in the day by dismissing the well-set Vijay, who hit 9 fours and 4 sixes in his marathon 485-minute innings, and night watchman Amit Mishra (0) in the space of four balls.

At stumps, India had replied with 319 for four, still 218 runs behind the visitors' tally with six wickets in hand on a track that showed some signs of wear and tear but did not hold many terrors for the Indian batsmen.

The post-tea dismissals of the well-entrenched Pujara and Vijay, five minutes before close, and then Mishra off the last ball, has given big hopes to the visitors to apply pressure on the hosts tomorrow.

Pujara was out chasing a wide ball from Ben Stokes while Vijay and Mishra were dismissed by Adil Rashid and Zafar Ansari respectively.But unless India suffer a dramatic collapse, the game looks headed for a tame draw.

Today, the Rajkot-born Pujara was the more aggressive batsman in the second-wicket pair in his home venue and notched up his ninth Test hundred overall in his 39th Test.

His innings was laced with 17 hits to the fence.Vijay, on the other hand, was not averse to playing the second fiddle to Pujara. The duo had previously compiled five three-figure stands, including a mammoth 370 against Australia in the Hyderabad Test three years ago. Today's stand was also their second in excess of 200.

Vijay also carried on bravely after taking a nasty knock on his knee from Chris Woakes after completing his hundred.The way the second-wicket duo complemented each other was an indication of how well they jelled together today and in the past with different styles of batting.

The Chennai-born batsman scored his seventh Test hundred and second against the visiting team, also his first since a knock of 150 against Bangladesh at Fatullah in March last year.