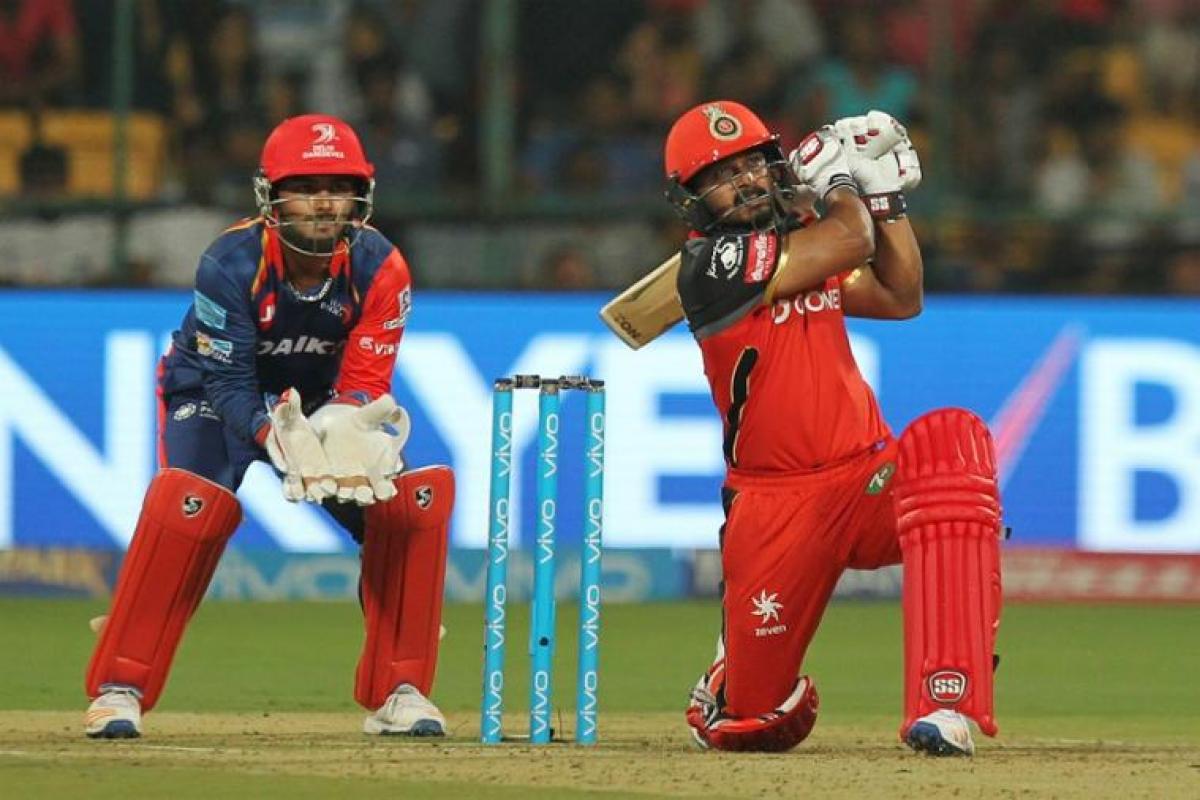 The Maharashtra batsman not only blasted a quick-fire 37-ball 69, but more importantly shared a 66-run partnership for the fourth wicket with Stuart Binny (16) to help the hosts post a fighting total of 157/7.

Delhi fumbled in the chase, being restricted to 142/9 as they lost by 15 runs. Young left-handed batsman Rishabh Pant, whose father died on Wednesday, showed a lot of composure as he waged a lone battle for Delhi with a cracking 57 off 36 deliveries. Sam Billings (25) was Delhi's second highest scorer.

Not much was the difference in quality stroke-making between the knocks played by Jadhav and Pant. Both were similar type of knocks and both came under pressure.

RCB, who lost the opening match to defending champions Sunrisers Hyderabad, were under pressure from the beginning. Delhi pacers -- Zaheer Khan (2/31), Chris Morris (3/21) and Pat Cummins (1/29) -- kept it tight at the beginning, keeping the runs in check.

Morris accounted for the explosive Jamaican Chris Gayle (6), with the left-handed batsman mistiming a full toss delivery and was caught by Sanju Samson at mid-wicket.

Mandeep Singh (12) too didn't last long, chopping a delivery from Cummins on to his stumps as RCB were reduced to 41/2 in 5.5 overs.

Their problems increased as stand-in captain Shane Watson (24) missed the line of a delivery from left-arm spinner Shahbaz Nadeem and was stumped by wicket-keeper Rishabh Pant in the ninth over.

At 55/3, Jadhav and Binny joined hands and they resurrected the RCB innings before Zaheer broke the partnership when Binny carted one to the hands of Sam Billings at deep mid-wicket.

Jadhav's knock was laced with five fours and as many sixes. Jadhav picked out leg-spinner Amit Mishra for special treatment, hammering two sixes and couple of fours in the 13th over.

In the following over, the diminutive right-hander smashed West Indian medium pacer Carlos Brathwaite for a six and a four as he completed his 50 runs in 26 deliveries.

Jadhav also chipped in with 21 runs for the fifth wicket with rookie Vishnu Vinod (9) before Delhi skipper Zaheer Khan put the brakes on the scoring rate with two quick wickets -- effected Vinod's run out with Shahbaz Nadeem's throw and induced Jadhav with a slower one only to be caught by Chris Morris at mid-off.

The fall of Jadhav and Vinod in quick succession shifted the momentum in favour of the visitors, after which Pawan Negi (10), Iqbal Abdullah (5 not out) and Tymal Mills (0) failed to accelerate.

Delhi, too had their story of struggle in their innings. Aditya Tare (18) and Sam Billings (25) gave them a quickfire 33-run opening stand until the former was removed by Tymal Mills.

The wickets of Karun Nair (4) and Billings meant Delhi were reduced to 55/3 in 7.3 overs. Billy Stanlake picked up Nair and Sanju Samson (13), while left-arm spinner Iqbal Abdullah snared Billings.

Delhi continued to lose more wickets as all-rounders Chris Morris (4) and Carlos Brathwaite (1) found it tough under pressure with the required run rate mounting to more than nine per over.

But 19-year-old Pant put Delhi in contention as his elegant stroke-making, which fetched him three fours and four sixes, pressurised RCB.

But with no support from other end, it was tough for him. He fell in the 20th over, from which 19 runs were required for Delhi. Pawan Negi had his stumps dismantled, ending the hopes of Delhi.