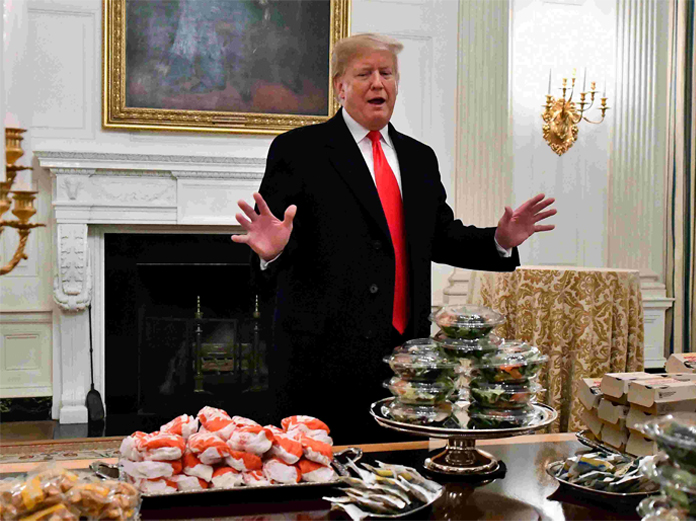 US President Donald Trump hosted a fastfood dinner for a university football team during their national championship celebration at the White House, the media reported

Washington, Jan 15: US President Donald Trump hosted a fast-food dinner for a university football team during their national championship celebration at the White House, the media reported.

Before the dinner on Monday night, Trump told the media earlier in the day that he was serving "McDonald's, Wendy's and Burger King's with some pizza" to the Clemson University football team, reports CNN.

"I think that would be their favourite food, so we'll see what happens," he added.

"Because the Democrats refuse to negotiate on border security, much of the residence staff at the White House is furloughed -- so the President is personally paying for the event to be catered with some of everyone's favourite fast foods."

Returning to the White House on Monday evening from a brief trip to New Orleans, Trump told the media that he was providing the Tigers with the fast-food dinner, "paid for by me", as a result of the shutdown.

"Because of the shutdown, you know we have the great Clemson team with us, the national champions. So we went out and we ordered American fast food, paid for by me," Trump said. "Lots of hamburgers, lots of pizza."

Trump promoted the dinner as "great American food". According to the President, a total of 1,000 burgers were brought in, with another table that was covered with french fries and pizza.

As players entered the White House's East Room, the table was piled high with boxes of burgers on silver trays, and the White House band played a jazz rendition of Michael Jackson's classic "Billie Jean", according to Buzzfeed.

Guests were given white dinner plates for their meals. The fries were held in paper cups bearing the presidential seal.