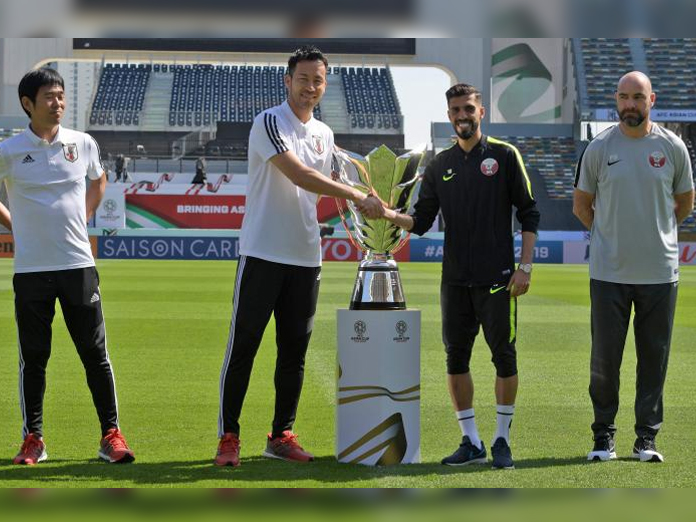 Abu Dhabi: Continental superpower Japan will be out to secure a record-extending fifth Asian Cup title when they take on a young Qatar side building towards the 2022 World Cup in what should be a tight final on Friday.

The Samurai Blue may have the Asian Cup pedigree but they are a work in progress and stuttered through their early matches in the United Arab Emirates before exploding into life with a ruthless 3-0 humbling of heavyweights Iran in the semi-finals.

Qatar had the easier route through the last four against the hosts but showed huge character in the face of a hostile crowd to run out 4-0 winners and reach a continental title-decider for the first time.

Felix Sanchez’s Qatar side have the leading marksman in the tournament in Almoez Ali, who scored his eighth goal against the UAE to match Ali Daei’s 1996 record, and go into the final having won all six matches without conceding a single goal.

Japan striker Yuya Osako, who scored two goals in an outstanding performance against Iran, will certainly test the Qatar defensive line at Zayed Sports City but it will be bolstered by the return from suspension of Bassam Al-Rawri.

Coach Hajime Moriyasu took over the Japan squad after last year’s run to the last 16 at the World Cup and the control they showed in beating Iran was testimony to his rebuilding work.

As much as Osako and fellow forward Takumi Minamino impressed, it was the work in central defence of experienced captain Maya Yoshida and 20-year-old Takehiro Tomiyasu that laid the foundation for the win.

The pair held firm in the face of a barrage of long balls hoofed up to the powerful Iran forward line and will hope to similarly shepherd the more subtly skilled Qatari attackers Akram Afif and Ali on Friday.

Ali, captain Hassan Al-Haydos and Hamid Ismail braved a more literal barrage of missiles from the irate UAE fans as they celebrated semi-final goals on Tuesday and the composure they showed should hold them in good stead against Japan.

The Qataris, many of whom have been coached by Spaniard Sanchez up through the age groups from when they were nine years old, have shown a great sense of tactical cohesion and team unity throughout the tournament.

While their ultimate goal will be to avoid humiliation when Qatar becomes the first Gulf nation to host the World Cup in three years’ time, you get the sense that the players are on something of a mission in the UAE.

Their fans have been unable to travel across the Gulf to support the team because of the current political rift between Qatar and the UAE and the players appear determined to take a first major international trophy home to them.

With few Japanese fans having made the trip and the locals not being too well-disposed towards the Qataris at the moment, there might not be much of a crowd to see them do it if they can prevent Japan from lifting the cup for a fifth time.