Full of sound and fury 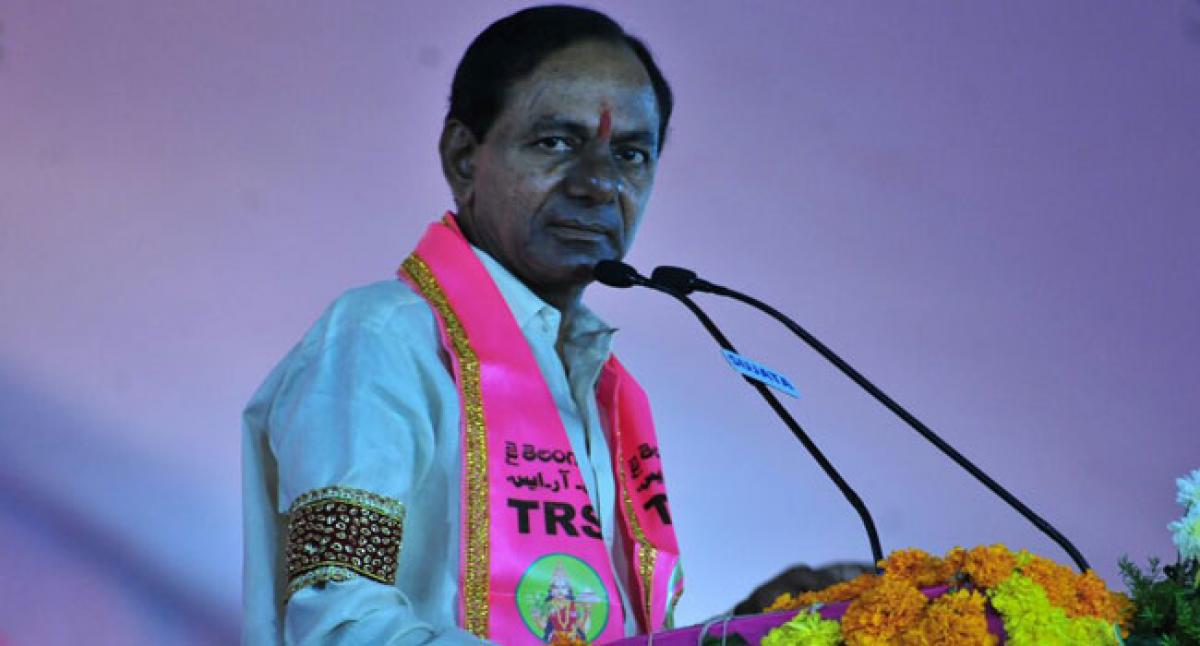 Prolonging guessing games in political as well as media circles, Telangana Chief Minister K Chandrashekar Rao on Sunday chose Kongara Kalan, the venue of his mammoth public meeting on the outskirts of the city, as a support to wriggle out of a dicey situation in which he was widely expected to make an announcement regarding early elections to the State Assembly

Hyderabad: Prolonging guessing games in political as well as media circles, Telangana Chief Minister K Chandrashekar Rao on Sunday chose Kongara Kalan, the venue of his mammoth public meeting on the outskirts of the city, as a support to wriggle out of a dicey situation in which he was widely expected to “make an announcement regarding early elections to the State Assembly.”

“The media and political parties are abuzz with reports on dissolution of the Assembly before the completion of the five-year term. But, I will take political decisions keeping in mind the interests of the State, those of the people and the TRS. As a Chief Minister, it is not proper on my part to announce ‘political decision’ at a public meeting conducted to showcase the government’s performance,” he said, carefully wording the much-awaited lines on the turn of political events during the Pragati Nivedana Sabha.

In his 50-minute speech, the chief minister, referred multiple times to speculations about dissolution of the Assembly and recounted how the state cabinet and the party state committee had vested him with all powers to “take an appropriate decision that would do good to the state”. With KCR keeping the cards close to his chest, political circles, particularly the Congress were left confused, while leading lights of the media were none the wiser.

Considering the tone and tenor of this speech, he did kick off election campaign, but what became clear to some observers was that his studied silence on when elections would take place is linked to the fact that he does not have any confirmation over whether the Election Commission would be in a position to club elections to the Telangana assembly with those being held to four states in December 2018.

KCR reiterated the need for Telangana people to protect their self-respect. “We do not have to do ghulam giri to anyone in Delhi. Let us keep our self-respect like the people of Tamil Nadu who choose only local parties to rule their state,” he said, adding: “The leaders of the Grand Old Party (Congress) always knelt before their Delhi leaders and mortgaged Telangana’s pride in the past.”

He warned the people that they could face similar humiliation if ‘Delhi empire’ comes back to power. “We should keep the decision-making power to ourselves only,” he stressed. At the end of the day, one major inference from his address was that he has either not made up his mind on when to go in for Assembly elections or is keeping the decision concerning dissolution of the Assembly close to his chest for eventual announcement so suddenly that it would allow as little time as possible for the Congress to face the elections.

The announcement by deputy chief minister K Srihari, after a brief cabinet meeting earlier in the day, that the next cabinet meeting would take place “very shortly” had in fact kept rumour mills hyper active that the Telangana Chief Minister is keen on going in for early elections. But when KCR said at Kongara Kalan that he would keep his word that he would ensure supply of drinking water to every household in the state under Mission Bhagiratha six months before the elections; observers were left wondering if he was indicating that he had dropped his decision to dissolve the assembly and go in for early elections.

KCR, who was expected to speak for more than two hours, appeared disinterested in speaking for long and his usual punchlines and pot shots directed at the Congress were missing. Humour, which has been the hallmark of his speeches while attacking the Congress, was singularly missing.

In fact, there was very little reference to the Congress and the TDP rules in the combined state of AP, except when he mentioned the hike in power tariff in 2000 and how subsequently Congress rulers had played with the lives of the people of Telangana.

He, however, pledged to make Telangana a poverty-free state, create one crore acres of Green Telangana, and provide employment opportunities to all youth in his second term. He indicated that the pension amount would be increased. A manifesto committee with TRS senior leader K Keshava Rao as it chairman would be constituted soon, and that panel would finalize the projects and programmes the TRS would take up “after it returns to power for a second term in the state”.

Claiming that his government had succeeded in bringing new zonal system to render justice to local youth on the employment front, the chief minister said it would not have been possible if the TRS and his government were not in the existence. He gave an example of the exploitation of mining resources, mainly sand mining, during Congress government. KCR said his government generated Rs 1,980 crore from mining in four years, while the Congress government could earn only Rs 9.60 crore between 2004 and 2014.