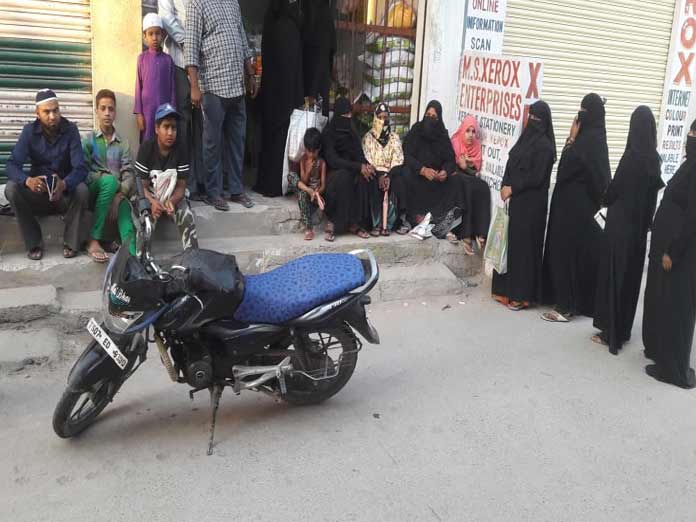 Even after commissioning a host of techenabled initiatives, the Telangana State Civil Supply Department is yet to win the hearts of the people in terms of providing services efficiently, as in many areas, the customers are forced to wait for hours every month at fair price shops to get the ration due to a faulty network system

Rajendranagar: Even after commissioning a host of tech-enabled initiatives, the Telangana State Civil Supply Department is yet to win the hearts of the people in terms of providing services efficiently, as in many areas, the customers are forced to wait for hours every month at fair price shops to get the ration due to a faulty network system.

The department has introduced the T-Ration mobile app, GPS technology enabled surveillance, command and control rooms to track the vehicles carrying food grains, special operation teams to prevent siphoning of food supplies, which has been a major scam in ration supplies. Even ePOS Machines were introduced to enable the consumers to get the ration on time from any of the FP shops near them, but lack of proper supervision during distribution process is making all these cost-effective and consumer-centric initiatives unproductive.

Consumers, mostly, the daily wage employees, labourers and working women stand in queues for hours to get the ration and almost all of them are in a hurry for their turn to fill up their bags and return home, so that they can reach their workplace on time. Moreover, the shop is open only for a few days in a month and no one wants to take any chances.

According to the data provided by the Civil Supply Department on its website there are a total of 1,05,998 cards under NFSA (National Food Security Act) and 80,364 cards under State quota for the area. As such, the total number of cards is 1,86,362, approved under the Saroornagar-3 zone (Rajendranagar) of the Civil Supply department.

However, the problems start when the ePOS machines at FP shops fail to respond to the biometrics due to a defective network system much to the chagrin of the consumers.

“What is the use of these initiatives when consumers return home without getting the monthly ration on time even after waiting in queues for hours? The faulty network system that seldom works properly when needed is resulting in ePOS machines refusing to authenticate the biometrics of the consumers,” said Mohd Hameed, a perturbed consumer who was forced to return empty handed after waiting for an hour to get the ration at Hassan Nagar area of Rajendranagar here on Monday.

Such incidents are quite common for the first few days of every month at the fare price shops comes under the purview of Saroornagar-3 of Civil Supply Department, wherein consumers gather in a large number to fetch the commodities home.

“Earlier, manual entry system was being used but we could reach home with the commodities. Though the old system was manually operated and time consuming, but at least, we could manage to reach home on time. Later, with tech-enabled ePOS system being introduced a few months ago, we felt happy that it would cut short the waiting time and help us to get the ration more easily than earlier. However, for the last few months, the whole process became more time consuming and has put us in a strange predicament with faulty network system that is denying authentication of biometrics,” said Samina Begum, another consumer.

“We are unable to make any transaction due to faulty network. We have brought the matter to the notice of the authorities concerned and are waiting for the network to be restored, said a dealer in the area.