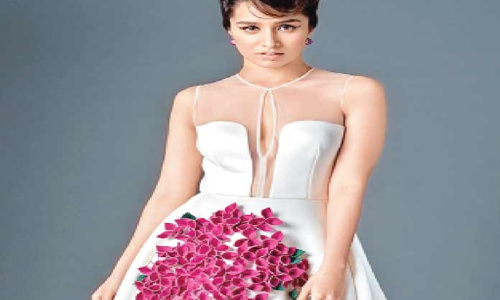 Btown diva Shraddha Kapoor has surpassed Ttown divas like Nayantara, Anushka, Kajal and Tamannaah by reportedly pocketing Rs 5 crore to play lead opposite Prabhas in Saaho Billed to be a multilingual film being made in Telugu, Tamil and Hindi languages, the producers didnt mind digging deep into their pockets

B-town diva Shraddha Kapoor has surpassed T-town divas like Nayantara, Anushka, Kajal and Tamannaah by reportedly pocketing Rs 5 crore to play lead opposite Prabhas in ‘Saaho’. Billed to be a multi-lingual film being made in Telugu, Tamil and Hindi languages, the producers didn’t mind digging deep into their pockets. “Shraddha Kapoor becomes the highest paid Telugu actress,” says an industry source and adds “Being a B-town star, she is a value addition to the big project and bound to expand the appeal of the film across India. She would have realized that working in a Telugu film is more lucrative than her B-town films,” he adds. The makers released the teaser on her birthday (March 3) which showed her playing a strict cop and looks pretty as well. The soft-looking lover girl of ‘Ashiqui 2’ and ‘Ek Villain’ plays a tough cop in her T-town debut and goes for an image makeover. In fact, she has eclipsed her B-town colleagues like Pooja Hegde, Kiara Advani and Amyra Dastur by drawing almost `double’ their pay, although they have hits in Telugu behind them. Whereas for Prabhas who gained pan-India image with ‘Bahubali’ was looking to pair up with Hindi film actress to give a fillip to his action adventure. Nonetheless, the daughter of yesteryear villain Shakti Kapoor is laughing all the way to the bank.