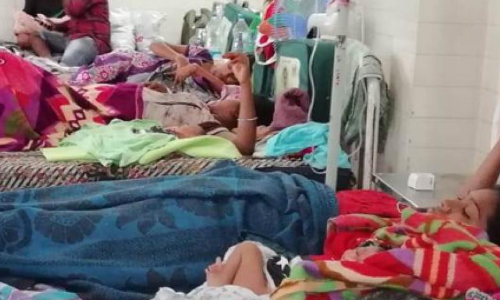 The poor women, who have been approaching the Area Hospital in Mancherial for delivery, have been facing several problems with the attitude of the hospital doctors and paramedical staff and lack of amenities in the hospital

Mancherial: The poor women, who have been approaching the Area Hospital in Mancherial for delivery, have been facing several problems with the attitude of the hospital doctors and paramedical staff and lack of amenities in the hospital.

Moreover, they have to grease the palms of the staff there to undergo normal delivery. Otherwise, the doctors would not hesitate to perform Cesarean section on them. Not only that, these poor mothers have to pay the staff to see their just born child.

The hospital is patronised by patients from three Assembly constituencies. Daily on an average several hundreds of patients throng the facility and the hospital will never have required number of doctors. They see patients for the namesake and refer them to their private clinics.

The doctors’ negligence reached its peak as they are least bothered when women complain of puss formation around the stitches after the cesarean surgery.

Shobha of Jakkapalli village, Kotapalli mandal, undergone knife to give child birth 15 days ago. After the delivery, none bothered to check her health condition. Puss formed where the stitches were administered and she became sick due to infection.

In another case, Manasa of Srirampur Naspur, delivered a child 12 days ago. The stitches were not removed till date. Her stitches have become infected and puss formed.

The doctors said that as the stitches administered are not getting assimilated with skin, thus leading to infection. If the patients question them further about the reasons, the doctors would spew fire on them.

The hospital staff should be bribed from Rs 1,000 to Rs 3,000 to get normal delivery. They should be paid anything between Rs 500 to Rs 1000 to see the new-born. As there is no water facility in the hospital, the patients have to bring water with buckets. The toilets are always unkempt.

The patients requested the officials of department concerned to enquire about the government doctors at least now and provide better treatment to the poor people.