Salient features of the Constitution 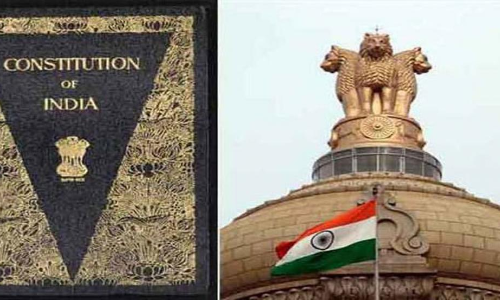 The power of judicial review is a necessary concomitant of fundamental rights otherwise it is meaningless to enshrine individual rights in a constitution as fundamental if they are not enforceable in courts of law against the state. Upto now the Supreme Court has struck down many such acts as ultravires. At the same time it must be pointed out that various provisions have been inserted into the constitution which have taken out considerable areas from the pale of judicial review. Example article 31 (A), 31(C), IX schedule which relates to article 31(B).

A fine balance has been struck between the parliamentary sovereignty and judicial review. In the case of the supreme court of USA the constitution is what it says. It can invalidate any law passed by the legislature not only on the ground of transgression but also it is opposed to some general principles underlying vague expressions such as due process of law.

Thus the American judiciary sits on the head of the legislature. On the contrary, in the english constitution the parliament is supreme which can do everything and anything except making male a female or female a male. The courts are forbidden to nullify any act of parliament on any ground what so ever.

In 1973, the Supreme Court has gained much ground for judicial review by inventing a new doctrine called " the basic structure" in the Keshavananda Bharti case. The amendments made to the constitution on or after 24/4/1973 which were included in the IX schedule shall be tested on the grounds of basic structure. No blanket protection is available to the laws inserted in the IX schedule at present.

The constitution establishes a federal polity. It contains all the usual features of the federation such as set of two governments, division of powers, written and supreme constitution, bicameralism and independent judiciary. However, it does not provide for pure federal form. It has imbibed many unitary features which strengthens the hand of central government.

The striking unitary features are single constitution, single citizenship, integrated judiciary, appointment of governors by the centre, all India services ,emergency provisions and so on. The Indian constitution is a fine blend of federal and unitary features which is unique in the world. Though it is a federation, the term is nowhere mentioned in the constitution. It is described as a union of states as per Article 1. The above position can be explained by observing the following two things.

1) Indian federation is not the result of an agreement by the states.

2) No state has the right to secede from the union.

Thus, it is federal in form but unitary in spirit. This unique position has been aptly described by K.C.Wheare as "quasi Federal". Morris Jones described it as "bargaining federalism". Granville Austin described it as " cooperative federalism". "Federation with strong centralising tendency." by Ivor Jennings. Apple by descibed it as "extremely federal".

The unique achievement of the Constitution is the unification and consolidation of some 552 Indian states with the rest of India. At the time of government of India act 1935, India was divided into two parts - British India and the Indian states. The British india comprised of nine provinces and some other areas administered by government of India itself. There were 600 States which were under the personal rule of the rulers.

The distinguished feature of these states was they were not annexed by the british crown but they were allowed to remain under the personal rule of princes under the overall suzerenity of the crown. The term paramountcy aptly suits to explain the relationship between the Crown and the princely states.

The Government of India Act 1935 envisaged a federal structure for the whole of india in which the indian states figure as units along with the British provinces. Nevertheless the framers of the act differentiated the Indian states from the provinces in two respects which ultimately proved fatal for the scheme of federal polity.

The two points of difference were

b) while in the case of the provinces the authority of the federal government extended over all to the provinces which was sacked out by the act. Whereas in the case of the indian states the authority of the federation could be limited by the instrument of accession. However the scheme of federal government never came into existence and the act of 1935 was finally abandoned in 1939 when world War II broke out.

Emergency provisions are incorporated into the constitution to enable the president to tackle effectively the unforeseen and extraordinary situation. These provisions are intended to safeguard the unity, integrity and sovereignty of the state and the democratic fabric of the state.

There are three types of emergencies

1) Under article 352 national emergency can be declared on the ground of war, external aggression or armed rebellion.

2) Under article 356 president's rule or constitutional emergency on the ground of failure of the constitutional machinery can be declared in a particular state.

3) Under article 360 financial emergency can be declared on the ground of threat to the financial stability.

During emergencies the federal polity turns into unitary one without any amendments to the constitution. This kind of transformation of the political system from federal to unitary is a unique feature of the Indian constitution.

The constitution envisages secular state which does not uphold any particular religion as the religion of the state. There is a distinction between the Indian concept of secularism and western concept of secularism. In the Western concept there is a clear cut separation of the religion and the state, which is negative. This does not apply in Indian context where the society is multi religious. The Indian secularism is a positive one giving equal respect to all religions or protecting all religions equally.

The Indian Constitution adopts universal adult franchise i.e every citizen who completes the age of 18 years has a right to vote without any discrimination on the grounds of caste, race, religion, sex, literacy, wealth and so on. The voting age was reduced to 18 years from 21 years in 1989 by the 61st constitutional amendment act of 1988.

The adoption of universal adult suffrage (article 326) is a bold experiment in India, having regard to the vastness of the country and its population and with an overwhelming illiteracy. The adult suffrage in India is wider than that of England or that of the US. This is the underlining principle of popular Sovereignty contained in the preamble.

Though india envisages a federal polity it provides for only a single citizenship, that is the Indian citizenship. Unlike the US and switzerland where there is a provision of dual citizenship. In India all citizens irrespective of the state in which they reside have same civil and political rights of citizenship all over the country .

The constitution makes provision for the establishment of independent bodies along with the organs of the state. They are election Commission, comptroller and Auditor General, union Public Service Commission and state public service commissions.

Though initially there was only provision for dual polity later the 73rd amendment and 74th amendment acts of 1992 have provided for a third tier of government that is local self government.

2) The supreme court of lndia keeps a check on arbitrary power of the parliament in amending the constitution. Discuss critically.(mains 2013).