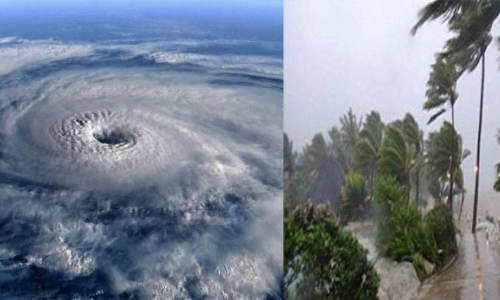 In the Northern Hemisphere warm air blows from the south and cold air from the north of the front. When the pressure drops along the front, the warm air moves northwards and the cold air moves southwards setting in motion an anticlockwise cyclonic circulation.

In Southern Hemisphere the cyclonic circulations occurs in clockwise direction. The warm air glides over the cold air and a sequence of clouds appear over the sky ahead of the warm front and cause precipitation. The temperate cyclones move in easterly (west to east) direction under the influence of westerly winds combined with coriolis force and control the weather conditions in the middle latitudes.

2) The isobars are elliptical in shape.

5) They give light showers which are highly beneficial for the crops and human health and efficiency.

6) In the ending part of the cyclone there is thunder and lightning.

7) Each cyclone is followed by a clear weather.

A tropical cyclone is a rapidly rotating storm system characterized by a low-pressure center, a closed low-level atmospheric circulation, strong winds, and a spiral arrangement of thunderstorms that produce heavy rain. Tropical refers to the geographical origin of these systems, which form almost exclusively over tropical seas.

These cyclones originate over oceans in tropical areas where the temperature varies between 25deg and 27 degrees and move over to the coastal areas bringing about large scale destruction caused by violent winds, very heavy rainfall and storm surges. The tropics extend from the Tropic of Cancer at 23.5 degree N to the Tropic of Capricon at 23.5 degree S. They derive their energy through the evaporation of water from the ocean surface, which ultimately recondenses into clouds and rain when moist air rises and cools to saturation.

This energy source differs from that of mid-latitude cyclonic storms, such as nor'easters and European windstorms, which are fueled primarily by horizontal temperature contrasts. Cyclonic winds blow counterclockwise in the Northern Hemisphere and blow clockwise in the Southern Hemisphere. The opposite direction of circulation is due to the Coriolis effect. Coastal regions are particularly vulnerable to the impact of a tropical cyclone, compared to inland regions.

The primary energy source for these storms is warm ocean waters, therefore these forms are typically strongest when over or near water, and weaken quite rapidly over land. Coastal damage may be caused by strong winds and rain, high waves (due to winds), storm surges (due to severe pressure changes), and the potential of spawning tornadoes.

Tropical cyclones also draw in air from a large area—which can be a vast area for the most severe cyclones—and concentrate the precipitation of the water content in that air (made up from atmospheric moisture and moisture evaporated from water) into a much smaller area. This smaller area is known as eye. Around the eye is the eye wall, where there is a strong spiralling ascent of air to greater height reaching the Tropopause.

This continual replacement of moisture-bearing air by new moisture-bearing air after its moisture has fallen as rain, may cause extremely heavy rain and river flooding up to 40 kilometres from the coastline, far beyond the amount of water that the local atmosphere holds at any one time.

A tropical storm is an organized system of strong thunderstorms with a defined surface circulation and maximum sustained winds between 63 km/h and 119 km/h. At this point, the distinctive cyclonic shape starts to develop, although an eye is not usually present. Though tropical storms are less intense than tropical cyclones they can produce significant damage.

1) The isobars are circular in shape.

3) The central area is designed as the eye of the cyclone.

4) They donot have fronts.

5) They derive their energy from the latent heat.

7) They occur in the Autumn season .

8) The clouds in the tropical cyclone are cumulonimbus having vertical extension upto 12kms.

9) They give torrential rainfall.

Tropical cyclones usually develop in the summer season. Tropical cyclones are one of the mechanisms by which surface heat energy is redistributed from the equator to the poles. Water temperatures of at least 26.5 °C are needed down to a depth of at least 50 m, causing the overlying atmosphere to be unstable enough to sustain convection and thunderstorms.

Another factor is rapid cooling with height, which allows the release of the heat of condensation that powers a tropical cyclone. High humidity, especially in the lower-to-mid troposphere; when there is a great deal of moisture in the atmosphere, conditions are more favorable for disturbances to develop.

Low amounts of wind shear are needed, as high shear is disruptive to the storm's circulation. Tropical cyclones generally need to form more than 555 km or five degrees of latitude away from the equator, allowing the Coriolis effect to deflect winds blowing towards the low pressure center and creating a circulation.

On a worldwide scale, May is the least active month, while September is the most active month. November is the only month in which all the tropical cyclone basins are active. In the Northern Atlantic Ocean, a distinct cyclone season occurs from June 1 to November 30, sharply peaking from late August through September.

The statistical peak of the Atlantic hurricane season is September 10. The Northeast Pacific Ocean has a broader period of activity, but in a similar time frame to the Atlantic. The Northwest Pacific sees tropical cyclones year-round, with a minimum in February and March and a peak in early September.

The majority forms between 10 and 30 degrees of latitude away of the equator, and 87% forms no farther away than 20 degrees north or south. Because the Coriolis effect initiates and maintains their rotation, tropical cyclones rarely form or move within 5 degrees of the equator, where the effect is weakest. However, it is still possible for tropical systems to form within this boundary as Tropical Storm Vamei and Cyclone Agni did in 2001 and 2004, respectively.

The arrival of the cyclone causes sudden increase in air temperature and wind velocity, accompanied by cumulonimbus clouds, lightning, thunder and emergence of high waves in the oceans. Visibility decreases and this condition lasts for few hours due to thick and overcast sky.

The arrival of centre of eye of the cyclone is marked by fair weather, calm breezes, clear sky and no rains. After 10 to 15 minutes, very severe weather again commences which is an indication of arrival rear of the cyclone. After 3-4 hours ferocity of the cyclone decreases and the weather becomes calm after cyclone has passed.

Disasters associated with the tropical cyclones:

Tropical cyclones cause large waves, heavy rain, flood and high winds, disrupting international shipping and, at times, causing shipwrecks. On land, strong winds can damage or destroy vehicles, buildings, bridges, and other outside objects, turning loose debris into deadly flying projectiles. The storm surge, or the increase in sea level due to the cyclone, is typically the worst effect from landfalling tropical cyclones, historically resulting in 90% of tropical cyclone deaths.

The broad rotation of a landfalling tropical cyclone, and vertical wind shear at its periphery, spawns tornadoes which persists until landfall.

Over the past two centuries, tropical cyclones have been responsible for the deaths of about 1.9 million people worldwide. Large areas of standing water caused by flooding lead to infection, as well as contributing to mosquito-borne illnesses. Crowded evacuees in shelters increase the risk of disease propagation.

When tropical cyclones surge upon shore from the ocean, salt is introduced to many freshwater areas and raises the salinity levels too high for some habitats to withstand. Some are able to cope with the salt and recycle it back into the ocean, but others can not release the extra surface water quickly enough or do not have a large enough freshwater source to replace it. Because of this, some species of plants and vegetation die due to the excess salt.

In addition, tropical cyclones can carry toxins and acids onto shore when they make landfall. The flood water can pick up the toxins from different spills and contaminate the land that it passes over. The toxins are very harmful to the people and animals in the area, as well as the environment around them. The flooding water can also spark many dangerous oil spills.

Although cyclones take an enormous toll in lives and personal property, they may be important factors in the precipitation regimes of places they impact, as they may bring much-needed precipitation to otherwise dry regions. Tropical cyclones also help maintain the global heat balance by moving warm, moist tropical air to the middle latitudes and polar regions, and by regulating the thermohaline circulation through upwelling.

The storm surge and winds of cyclones may be destructive to human-made structures, but they also stir up the waters of coastal estuaries, which are typically important fish breeding locales. Tropical cyclone destruction spurs redevelopment, greatly increasing local property values.

Impacts of El Niño and La Nina on cyclones:

The tropical Atlantic Ocean experiences depressed activity due to increased vertical wind shear across the region during El Niño years. During La Niña years, the formation of tropical cyclones, along with the subtropical ridge position, shifts westward across the western Pacific Ocean, which increases the landfall threat to China and much greater intensity in the Philippines.

Impact of Climate change on cyclones:

The 2012 IPCC report noted many observed changes in the climate, including atmospheric composition, global average temperatures, ocean conditions, and others. The report concluded the observed increase in tropical cyclone intensity is larger than climate models predict.

In addition, the report considered that it is likely that storm intensity will continue to increase through the 21st century, and declared it more likely that there has been some human contribution to the increases in tropical cyclone intensity. P.J. Webster and others published in 2005 an article in Science examining the "changes in tropical cyclone number, duration, and intensity" over the past 35 years, the period when satellite data has been available.

Their main finding was although the number of cyclones decreased throughout the planet excluding the north Atlantic Ocean, there was a great increase in the number and proportion of very strong cyclones. According to 2006 studies by the National Oceanic and Atmospheric Administration US, "the strongest hurricanes in the present climate may be upstaged by even more intense hurricanes over the next century as the earth's climate is warmed by increasing levels of greenhouse gases in the atmosphere".

The occurence Hurricane Irma recently is a pointer in this direction. Studies published since 2008, by Kerry Emanuel from MIT, indicate that global warming is likely to increase the intensity but decrease the frequency of hurricane and cyclone activity. In an article in Nature, Kerry Emanuel stated that potential hurricane destructiveness, a measure combining hurricane strength, duration, and frequency, "is highly correlated with tropical sea surface temperature, reflecting well-documented climate signals,

including multidecadal oscillations in the North Atlantic and North Pacific, and global warming". Emanuel predicted "a substantial increase in hurricane-related losses in the twenty-first century". Research reported in the September 3, 2008 issue of Nature found that the strongest tropical cyclones are getting stronger, in particular over the North Atlantic and Indian oceans.

Wind speeds for the strongest tropical storms increased from an average of 225 km/h in 1981 to 251 km/h in 2006, while the ocean temperature, averaged globally over all the regions where tropical cyclones form, increased from 28.2 °C to 28.5 °C during this period. A 2017 study looked at compounding effects from floods, storm surge, and terrestrial flooding (rivers), and projects an increase due to global warming.

Recent Hurricanes in US:

The recent hurricanes in US in August and September 2017 named Harvey and Irma lashed out Texas, Florida in America and Carribean island respectively. These hurricanes were the strongest causing a vast devastation of property and human loss. The Irma was one of the most powerful Atlantic storms on record, a rare category of 5 hurricane. It was raising for more than 33 hours, packing winds upto 295 kms for hour.