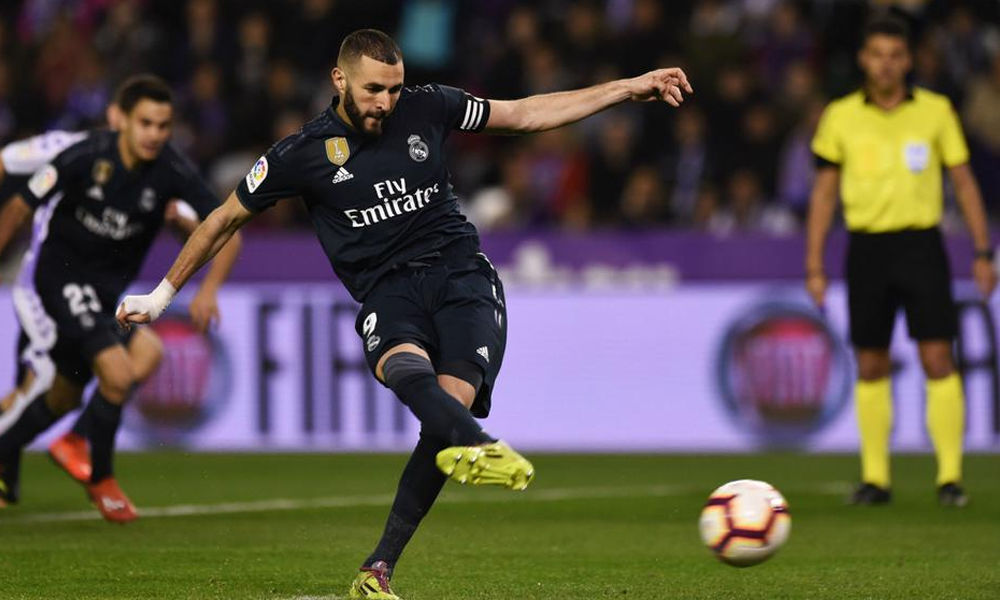 Valladolid (Spain), March 11: Real Madrid came back from an early deficit to trounce Valladolid on the road in a La Liga match that was a good bit toug...

Valladolid (Spain), March 11: Real Madrid came back from an early deficit to trounce Valladolid on the road in a La Liga match that was a good bit tougher for the capital squad than the 4-1 score would seem to indicate.

The home team on Sunday dominated the match during most of the first half, keeping Madrid off-balance with numerous attempts and finally getting on the board first - thanks to Anuar Tuhami - in the 29th minute, although Ruben Alcaraz had missed a penalty kick in the 11th minute and Sergi Guardiola had two goals disallowed, reports Efe news.

Santiago Solari, Real Madrid's coach, had all the necessary ingredients in his line-up, but the capital squad could not seem to get anything going against their hosts early on due to a lack of rhythm and slow reflexes on the recoveries.

Alvaro Odriozola fouled Guardiola in the box, and the striker's nice tap of Keko's crossing shot seemed to have given Valladolid the lead until the VAR consultation disallowed the goal.

Just a few minutes later, Guardiola, who has not yet notched a La Liga tally, had a header cancelled on an offside call.

Real Madrid - who was without the injured Dani Carvajal, Lucas Vazquez, Vinicius Junior, Gareth Bale and captain Sergio Ramos, on suspension - was on the ropes, it seemed, until Raphael Varane hit the equalizer from short range in the 34th minute, and that's where the score stood at halftime.

After the break, however, Madrid started to get the hang of the game, with Valladolid's Oscar Plano fouling Odriozola inside the box and Benzema getting Masip to jump the wrong way on the penalty kick for the lead.

Then, it was Benzema again, heading in Toni Kroos's shot to send the capital boys up 3-1.

Casemiro was sent off on a second yellow card in the 80th minute when he stood in the way of Plano on the hosts' free kick and Madrid had just 10 men on the pitch for the last minutes of the match, but the game was already sewn up.

Croatia's Luka Modric scored Madrid's fourth superfluous goal in the 85th minute after slashing into the box on a pass from Benzema.

The loss now forces Valladolid to win four or five matches of the 11 that remain to avoid relegation, while Madrid's win gives a little oxygen to Solari and provides a bit of calm after a hectic week.

Barcelona continues to lead the La Liga table with 63 points, followed by Atletico Madrid with 56 and Real Madrid with 51.