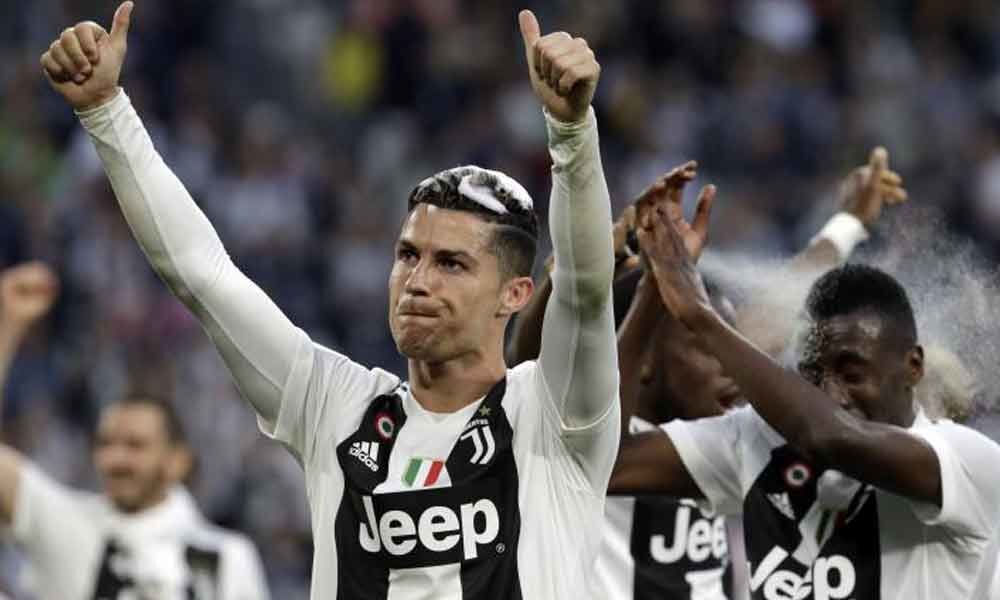 The breakthrough under Alex Ferguson at Manchester United. Then the coronation at Real Madrid. And now another title at Juventus.

Rome: The breakthrough under Alex Ferguson at Manchester United. Then the coronation at Real Madrid. And now another title at Juventus.

If ever there was a need to emphasize Cristiano Ronaldo's impact as a footballer, the five-time Ballon d'Or winner did it again this weekend by helping Juventus to the Serie A title in his first season in Italy.

In doing so, the 34-year-old Ronaldo became the first player in history to win league titles in the English Premier League (with United), the Spanish league (Madrid) and Serie A (Juventus).

"I'm very happy to have won in England, Spain and now the league title in Italy as well," Ronaldo said. "It meant a lot to me and it means a lot to us as a team."

Other players have won titles in three of the five major European leagues (England, Spain, Italy, Germany and France) but nobody had previously put together the combination of England, Spain and Italy.

David Beckham played in four of the top leagues but only won titles at United (six), Madrid (one) and Paris Saint-Germain (one), having failed to lift the Serie A trophy during his two loan spells at AC Milan.

Zlatan Ibrahimovic won four Serie A titles (three with Inter Milan and one with AC Milan), the Spanish league with Barcelona and four French championships with PSG.

Brazil fullback Maxwell was on many of those same teams as Ibrahimovic and also won in Italy, Spain and France.

Then there was Arjen Robben, who won the Premier League twice with Chelsea before adding a Spanish title at Real Madrid and seven Bundesliga trophies at Bayern Munich.

Another Dutchman who achieved the feat was Mark van Bommel, with titles with Barcelona, Bayern Munich (two) and AC Milan.

While Juventus also won the league in the seven seasons before Ronaldo's arrival, there was no doubting his impact in Turin. With 19 goals and six assists in 27 Italian league matches this season, Ronaldo played a part in nearly 40 percent of Juventus' goals.

So it came as no surprise when his dangerous cross from a sharp angle was redirected in by a defender as an own-goal for the winner in Juve's 2-1 win over Fiorentina on Saturday - giving the Bianconeri more than the single point they needed to secure a record-extending eighth straight title with five rounds remaining.

It's the sixth league title of Ronaldo's career. The first came as a 22-year-old at United, ending a four-year drought for Ferguson's squad as Ronaldo scored 17 goals - three fewer than Didier Drogba's league-best 20.

That was just a warmup for what came next.

In 2007-08, Ronaldo led the Premier League with 31 goals and helped United to the league title and the Champions League trophy.

Another Premier League title came the following season as Ronaldo finished second in the scoring charts with 18 goals, behind only Nicolas Anelka, who had 19 for Chelsea.

While Ronaldo won only two Spanish league championships in his nine seasons at Madrid, he also helped the team to four Champions League trophies - including three consecutive European titles over the last three seasons.

When Juventus acquired Ronaldo in a 100 million euro ($112 million) transfer last year, the expectation was that he would help end the club's long chase for a Champions League trophy.

Ronaldo did his part by scoring a hat trick to overturn a first-leg deficit against Atletico Madrid in the opening knockout round and goals in both legs of the quarterfinals against Ajax but the Bianconeri were still eliminated by the Dutch club.

"Next year is a new page, the fans all want it and so do we," Ronaldo said. "It is an important trophy, but it's difficult to (win)."

A Champions League title with Juventus would enable Ronaldo to match another multiple nation and multiple team record - joining Clarence Seedorf as the only players to win the trophy with three different clubs.