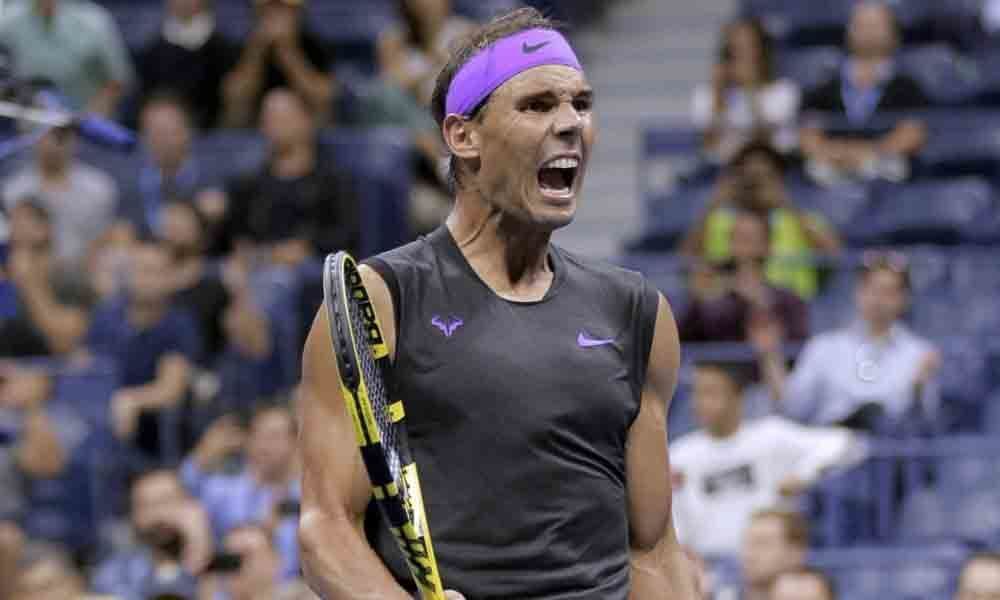 x
Rafael Nadal of Spain reacts during the US Open quarterfinals match against Argentina’s Diego Schwartzman on Thursday. Nadal won the match 6-4, 7-5, 6-2
Highlights

Spaniard, a three-time champion in New York, to play Italy’s Berrettini for a berth in final

New York (AFP): Rafael Nadal said he felt "in good shape" after advancing to the semi-finals of the US Open with a battling 6-4, 7-5, 6-2 win over Argentine 20th seed Diego Schwartzman.

Second seed Nadal, a three-time champion in New York, will play Italy's Matteo Berrettini for a berth in the final after the 18-time Grand Slam winner overcame a gritty performance from the 5ft 7in (1.70m) Schwartzman.

The Spaniard needed the best part of three hours to record an eighth straight win over two-time US Open quarter-finalist Schwartzman in a match that finished early on Thursday morning. He received treatment to his left forearm early in the third set but swiftly allayed any injury fears, after a knee injury forced him to retire during last year's semi-final against Juan Martin del Potro.

"I'm feeling good. Today was very humid day, very heavy day. I had some cramps in the end of the second and first five games, six games of the third. And then I take some salt, that's all, and then was over," Nadal said.

"The body is in good shape, I think. No big problems. Just of course now a little bit tired, long day, 1:30 (a.m.). Need to go to sleep. But I really believe that I'm going to be in good shape."

Nadal rolled through the first three rounds untested, a run that included a second-round walkover, but the 33-year-old feels stiffer competition in his past two matches -- against Marin Cilic and Schwartzman -- has left him primed for another shot at the US Open title.

"Today I make a step forward, in my opinion. That match give me confidence. Two matches in a row against two tough opponents. That's a moment to increase a little bit more the level, and I really believe that I can do it," Nadal said.

The win over Schwartzman sent Nadal through to a 33rd Grand Slam semi-final -- third most in history behind Roger Federer (45) and Novak Djokovic (36) -- as he reached the last four in New York for the eighth time.

Nadal is the only former major champion left in the men's field following the elimination of Federer and Djokovic, leaving him as the clear frontrunner in his pursuit of a 19th major title.

"I just won a very important match for me, and it is the moment to enjoy this victory. Tomorrow afternoon I'm going to start to think about what's the plan for after tomorrow," he said.