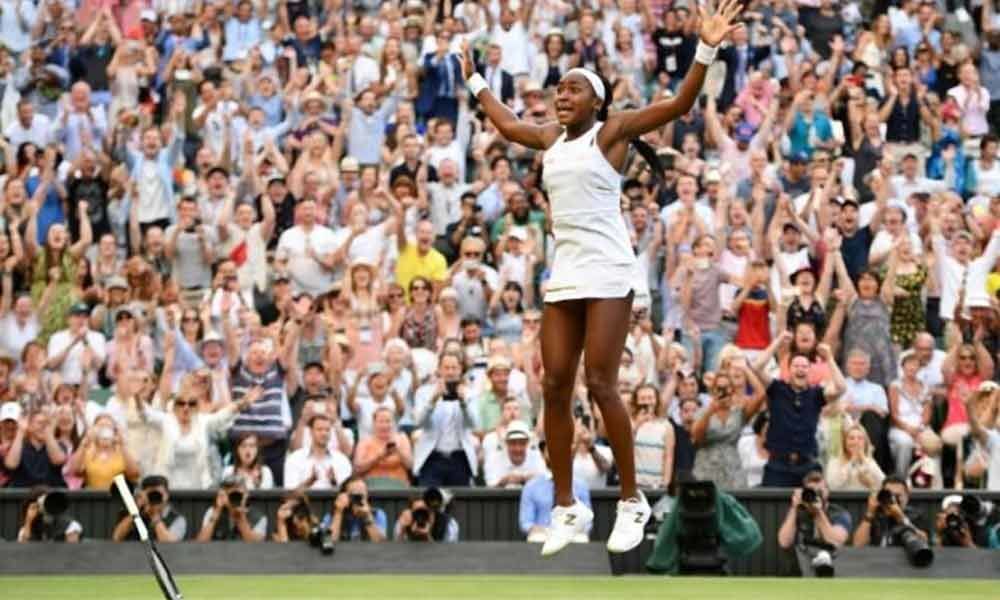 Teenager Coco Gauff has fired up Wimbledon but on Friday she made 66-year-old former soldier Brian Connor and his fellow Chelsea Pensioners especially happy.

London: Teenager Coco Gauff has fired up Wimbledon but on Friday she made 66-year-old former soldier Brian Connor and his fellow Chelsea Pensioners especially happy.

Connor, who reached the rank of Sergeant-Major after 23 years service largely in the Intelligence Corps, and his fellow scarlet-coated former servicemen made sure they got their share of photographs with 15-year-old Gauff following her courageous three-set win in her third round match. The Chelsea Pensioners, who total around 300, both men and women and reside at the Royal Hospital Chelsea in a fashionable area of London, are a traditional presence at Wimbledon as well as home matches for Chelsea football club.

Connor, whose military service took him to Northern Ireland and Hong Kong as well as other foreign destinations, told AFP he is more a general sports fan numbering tennis, football, rugby and cricket amongst his favourites. However, his highlight for the day was to watch Gauff on Centre Court. "There is obviously a lot of hype around her and her age and the fact she did well against Venus Williams," said Connor. "But it is great to see the future at that age competing with seniors who were youngsters themselves once and seeing what the next generation will be like." Connor, London-born but who was paying his first visit to Wimbledon as he served abroad from the age of 17 to 60, was not so sure he would get to have a selfie with Gauff.

"I will have a lot of competition! "I normally take photographs at the hospital so usually I am the other side of the camera," he added, and for good measure he had brought his along for the day. Connor, who spent his first few years back from serving abroad living in the North of England latterly with a daughter, may have been on safer ground with his comrades supporting Gauff as when it comes to football Chelsea is not his cup of tea. "No I said I am into football!" he said with a cheeky smile when asked did he enjoy watching Chelsea play. "Actually I am in a difficult position because I am a Spurs supporter.

"Being a Spurs supporter in the Royal Hospital Chelsea does not go down well." - 'Young Man'- Connor, though, has found a haven at the Hospital being back amongst fellow former servicemen and women. "Personally living on my own," he said explaining his reason for wanting to move in there. "I was one of seven kids, I went to boarding school, I joined the army so I have always been around people. "After retirement I got divorced and I was living on my own. "I hate being on my own sitting in the house watching TV making you feel that somebody is there but you are not watching it." Connor, who moved in last December and is called 'Young Man' by his fellow residents, has had his own taste of television fame. For he was one of 16 backing singers to 89-year-old fellow Chelsea Pensioner Colin Thackery, who won 250,000 pound when winning the popular 'Britain's Got Talent' show singing 'Love Changes Everything'.

"It was almost a case of no one else being in the competition," he said. "The audience were so vociferous even other competitors were saying well done he (Thackery) has won it." However, celebrations were initially muted. "We had Founders Day three weeks ago and Prince Harry was taking the salute," said Connor. "He did the inspection afterwards and I was one of the seniors presented to him. "He asked had I recovered from my hangover and he was very surprised when I said I did not have one as the bars were shut in the theatre and the club in the Hospital was as well by the time we got back."