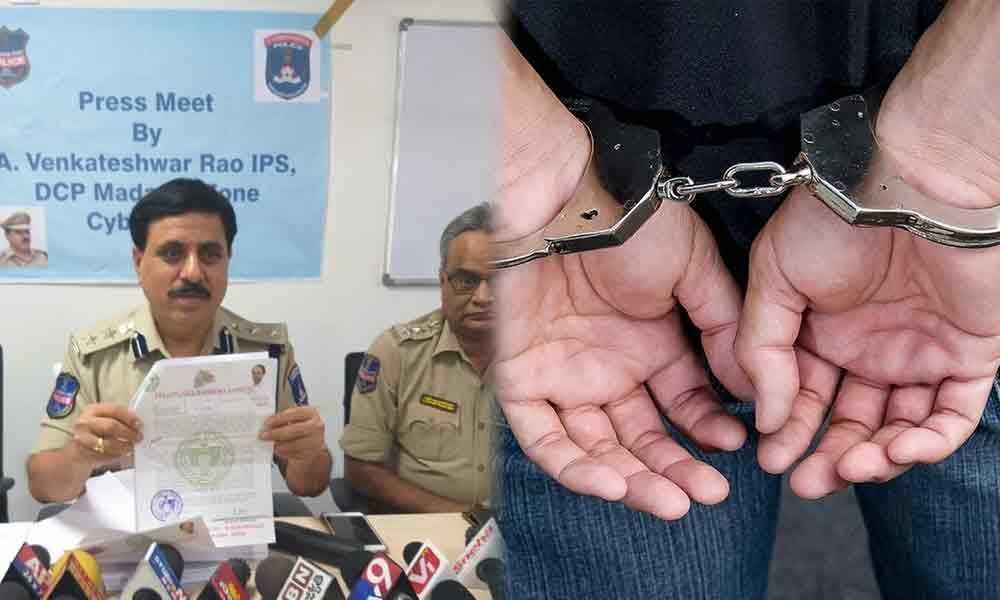 They doctored documents to encroach crores of worth land in Gachibowli

Hyderabad: The Cyberabad police on Saturday arrested three persons for allegedly forging the signature of Telangana Chief Minister K Chandrashekar Rao and fabricated documents to encroach crores of worth land in Gachibowli in the Greater Hyderabad limits.

Based on a complaint lodged by the Revenue Division of Officer of the Rajendranagar division, the Madhapur police arrested three persons.

Madhapur zone Deputy Commissioner of Police ( DCP ) A Venkateswara Rao said that the Rayadurgam police had received a complaint from revenue officials that 50-year-old Mohammed Qureshi submitted a forged document in the name of chief minister at inward section in Rangareddy Collector office instructing the district top official to register the land in the name of the applicant.

In the letter, the request was made to mutate the land and issue latest pahanies in respect of the land in Survey No 44/P to an extent of two acres and two guntas which is equivalent to 9,946 square yards situated at Gachibowli village, Serilingampally, RR district in the name of Qureshi.

In the probe, police said that Qureshi made an agreement with one Rafia Sultana of Golconda to register the land in her name.

He approached his friend Syed Rashid Hussain (37), who procured ten letterheads which are already signed, sealed and with forged signatures of Chief Minister from Baba Khan by paying Rs 45,000.

Rashid handed over nine fake, forged letterheads to Qureshi and took Rs 60,000 and kept one blank letterhead with him.

Later, Qureshi approached another friend B Amarendra (40), who owns a typewriting and photostat shop at Meerchowk.

Amarendra, on the request of Qureshi, drafted the letter in the name of CM letterhead addressing the Ranga Reddy Collector to mutate the land in the name of Osman.

The police official said that Qureshi, Amarendra and Rashid have been arrested and cases were booked under Section 420, 468 and 471 IPC.

Efforts are on to nab the other accused Baba Khan, who is absconding, to establish that how he generated and created the forged letterheads in the name of the Chief Minister with forged signature.