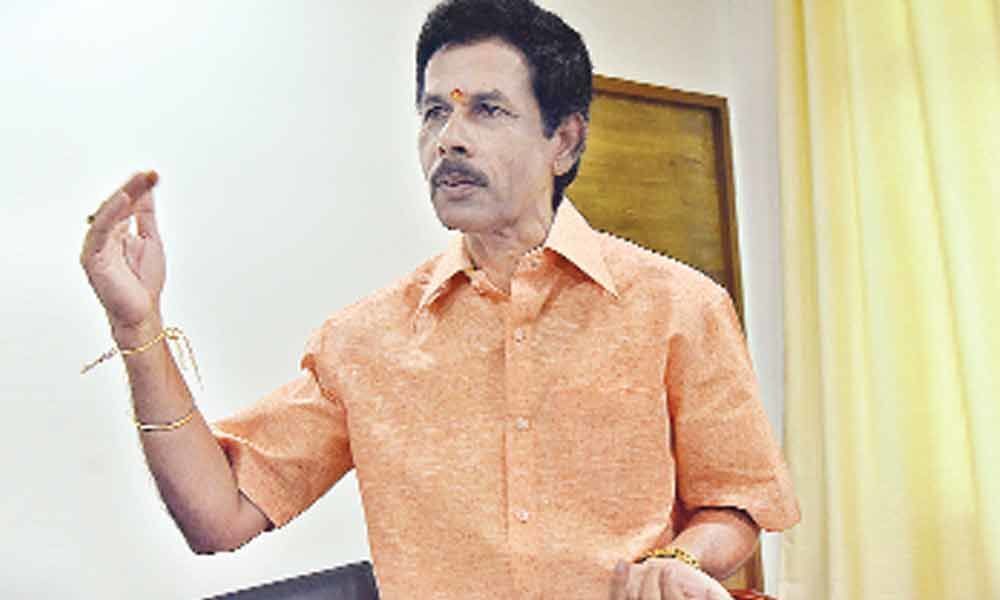 Speaking to The Hans India, B Janardhan Reddy, BJP candidate from Chevella Lok Sabha constituency, says people are voluntarily pledging their support to him. Though the campaign was dull initially, it picked up, he adds

There are only two days left for the election campaign. How is it going?

Initially, it was slow. But there is a sea change in the response from the people after Prime Minister Narendra Modi's public meeting in Hyderabad. People are coming out on their own in support of the BJP.

I am not able to visit every village in the Lok Sabha constituency due to the paucity of time. However, I am able to reach out to people at mandal level during the campaign. Wherever I go, people in big numbers are waiting for two to three hours to express their support to BJP.

Several national leaders have already campaigned and the Union Minister Parshottam Rupala is participating in a roadshow starting from Gachibowli, covering three urban Assembly segments of the constituency on April 7. Further, party chief Amit Shah will be addressing a public meeting at Shamshabad on April 8.

What are the main issues of focus of your campaign?

There are many issues. Some need to be addressed right from the scratch and others are promises remained unfulfilled for years. For example, TRS chief K Chandrashekar Rao had promised to make Vikarabad a tourism hub and building a satellite township. But they remained unfulfilled.

Other parties like TRS and Congress are also promising to address those issues. How are you different from them and why people should vote you based on those issues?

We don't find any kind of development despite Chevella is nearer to the State capital. Similarly, development eludes Tanduru, Vikarabad and Parigi Assembly segments.

The sitting TRS MP had openly said that he could not do anything for the last four years as the ruling TRS government in the State showed no interest in releasing funds for the development of these areas. Citing this, he had left TRS and now joined and contesting as the Congress candidate.

Similarly, the TRS candidate contesting is not known to anyone here and I wonder whether he even knows the boundaries of the Assembly segments within the Chevella Lok Sabha segment.

He is asking voters by invoking the name of KCR and banking on the strength of the TRS MLAs, sarpanches. So, I am asking people to see through how the TRS had failed to deliver on its promises to develop Chevella Lok Sabha and extend their support to BJP.

What you want to do for the people if you are given an opportunity?

I am highlighting the issues concerning people during my campaign. But more than giving promises I want to point out that I mean business.

As I mentioned earlier every party showcases Gachibowli and Hitech city and claims credit for its development. But if you look at beyond Serilingampally and Tanduru, hardly there is any sign of development.

There is a lot to be done on this front.

There are no junior colleges, study circles, skill development centres even. Local youth are deprived of opportunities to secure gainful employment. The situation in Vikarabad and Tanduru are worse.

People working in industries are facing health hazards due to pollution. Former Union Minister and BJP Secundrabad MP Bandaru Dattatreya had sanctioned an ESI facility there. Yet, no steps have been taken by the State government to help establish the facility.

Those apart, successive governments have been patting themselves about the development of the IT sector. But people coming from different parts of the country and working in the IT companies in the Chevella LS constituency are facing too many problems.

Lack of proper roads, other basic amenities has an adverse impact on the living conditions of those working in the IT sector. Also, people are busy doing business with the land prices skyrocketing in the area.

The TRS is asking people to elect 16 of its candidates to force the Centre to release funds for the development of the State. How do you respond?

Earlier, the TRS had 14 MPs. But it could not deliver anything except making empty promises. Most of the development projects in Telangana are taking place under Central government assistance under Prime Minister Narendra Modi's government. Even if they get all the 16 of their candidates elected, they cannot do anything.