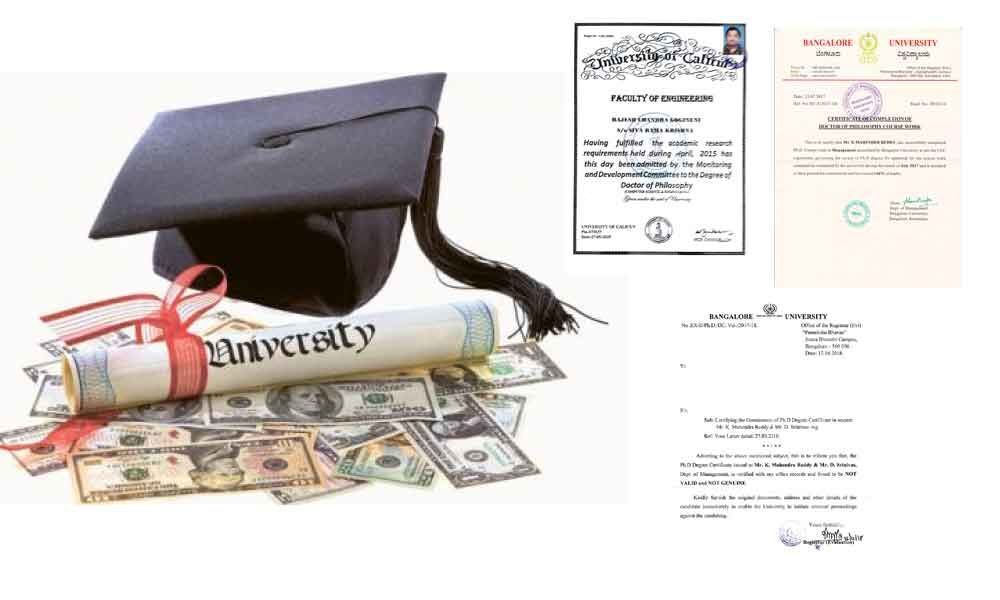 Are holders of fake postgraduate and doctoral degrees taking classes for students for years working as faculty members in the private engineering colleges and universities in Telangana?

Hyderabad: Are holders of fake postgraduate and doctoral degrees taking classes for students for years working as faculty members in the private engineering colleges and universities in Telangana?

This is the major issue that is bothering the senior officials of the TS Council of Higher Education (TSCHE) and State Education Department.

Speaking to The Hans India, a senior official from the TSCHE said the State universities have been asked to ensure strict scrutiny to weed out the black sheep following the revelation that there were many such faculty members working in affiliated colleges holding fake postgraduate and doctoral degrees.

A senior official from the JNTU-H said that one person produced certificates of completing his Bachelor of Engineering, Masters in Engineering and PhD degree in 2002, 2004 and 2010, respectively, from the Berhampur University in Odisha.

However, it was found that the said university did not offer the above degrees during the said academic years.

What was more curious is that the university started M Tech in Computer Science course in 2007.

But the person working as a principal in a minority engineering college in Hyderabad got a degree in Computer Sciences Engineering before that academic year. When caught red-handed, he got a fresh PhD degree from the CMJ University, Meghalaya in 2013.

However, luck turned against him this time like none other than on the directions of the Supreme Court that the said university was forced to close down and its Vice-Chancellor was arrested for selling PhD degrees. Earlier, he worked in engineering colleges in Rayagada, Bangaluru and Chennai.

Another member had got his PhD from the University of Calicut in 2015. However, the university in response to an RTI query denied awarding a degree to the said candidate who is working as a professor in the Computer Sciences Engineering department in a private college.

Similarly, one more person has been working as a faculty member claiming that he had got a PhD degree from Bangalore University. The BU not only denied awarding any degree to him, in turn, asked to furnish details so that it can initiate criminal cases against him.

In another case, a person working as principal submitted that he had got his Doctor of Science degree from the University of Dublin, California. But, the JNTU-H said it is not a recognized degree.

JNTU-H Registrar Prof N Yadaiah said they were now closely scrutinising the certificates and unless the candidate does not justify his PhD degree they were not accepting them as faculty members.