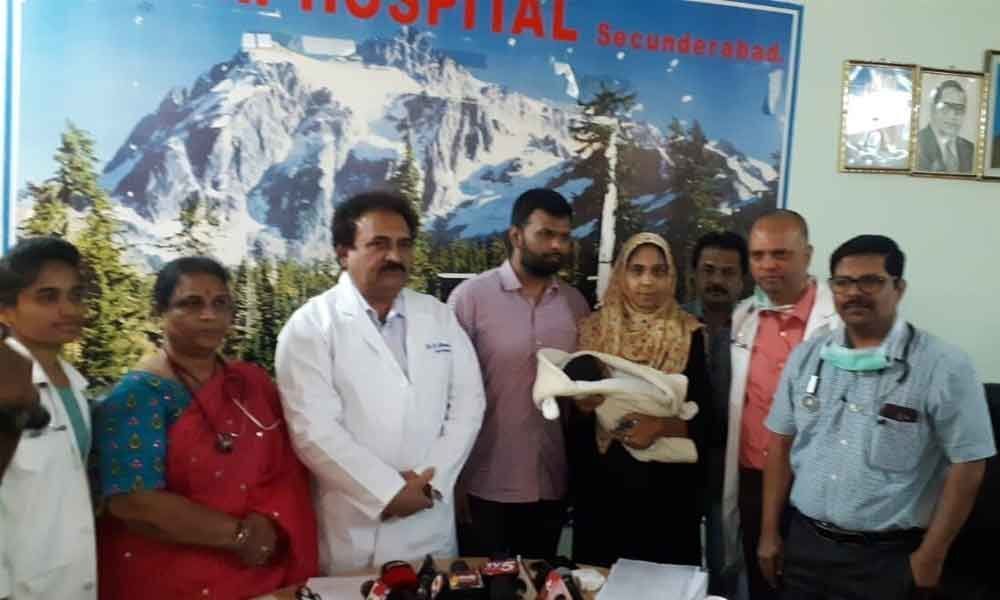 Hyderabad: Government hospitals, which make news headlines for lack of facilities and negligence on the part of the doctors, win accolades once in a blue moon.

One such case is relating to 27-year old T Fathima, a city resident, who was on deathbed for over a month as she was afflicted with Swine Flu and respiratory problems.

She was also in her ninth month of pregnancy. Fathima was diagnosed with Swine Flu. As doctors in some private hospitals did not give assurance to save the mother and unborn child, she was admitted to Gandhi Hospital on March 28.

The cost quoted by private hospitals for treatment of the mother was between Rs 25 lakh and Rs 30 lakh.

As soon as she was admitted, the doctors shifted her to the isolated ward for Swine Flu patients. Two days later she developed labour pains. Immediately the doctors and medical staff from Gynaecology and Pulmonology Departments assembled to oversee the delivery.

She was not in a state to be shifted to labour ward for delivery also and hence doctors and staff, wore all safety gear, and performed the delivery for her. Luckily it was a normal delivery and the baby's condition was normal without any complications.

However, post-delivery on March 30, T Fathima's condition was still critical and was on ventilator and she underwent treatment in the hospital for another 15 days. She continued medication for last ten days before completely recovering a day ago.

The baby was taken care of by her grandmother while Fathima was undergoing treatment.

Gandhi doctors convened a press conference to share the news with the media.

Hospital Superintendent Dr Shravan Kumar said that this was a rare case of successful delivery performed on a swine flu affected pregnant woman.

It was a high-risk case as the patient had Swine Flu and also lungs were affected due to respiratory problems. He said they decided to share the news now that mother had completely recovered.

Fathima's husband thanked Gandhi doctors for the miracle as he said a few corporate hospitals did not give any assurance of treating his wife and save her life and unborn child.