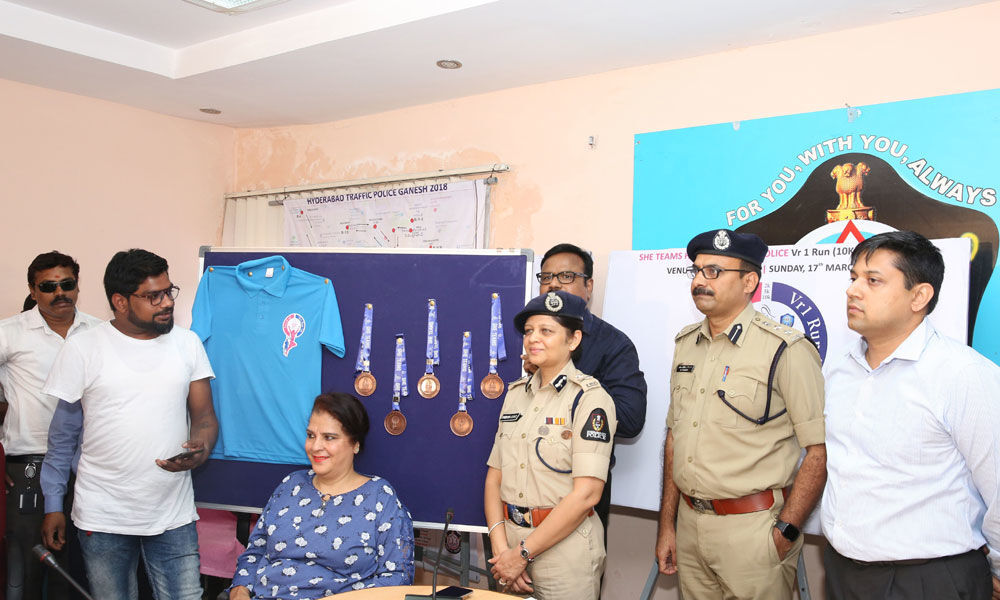 Hyderabad: As part of the International Women's Day celebrations, SHE Teams would be organising its annual 'V R 1 Run' to join hands for safety and sec...

Hyderabad: As part of the International Women's Day celebrations, SHE Teams would be organising its annual 'V R 1 Run' to join hands for safety and security of the women in Hyderabad. The run scheduled is for Sunday at 6:30 am at the People's Plaza on Necklace Road and Governor ESL Narasimhan will flag off the run. More than 5,000 citizens mostly students from schools and colleges registered their names for the runs.

Cycling masters, Amputee runners and 15 Wheel chair participants are also participating in the run and supporting the SHE Teams efforts in women safety. The curtain raiser for the programme was held on February 28 at FTAPCCI Marg in Nampally wherein the logo and theme were unveiled. T-shirt, Poster and Medals were launched by Rajiv Trivedi, Principal Secretary to Home Department for Telangana, Anjani Kumar, City Commissioner of Police, Burra Venkatesham, Secretary for Tourism and Culture Department for Telangana, Shikha Goel, Additional Commissioner of police for Crimes and SIT, Naina Jaiswal, International Sportswomen, Nikhil Siddharth Tollywood Actor were also present.

The kit consists of a T shirt and personalised RIFD enabled Bibs and Three best runners each in Female and Male categories will be rewarded with cash prize of Rs 10,000, Rs 5,000 and Rs 3,000 respectively. The Hyderabad city traffic Police has made elaborate arrangements for traffic convenience and regulation of traffic during the run.

The timings of the various runs are 10k run at 6:30 am, 5k at 6:40 am and 2k at 6:45 am and special arrangements have been made for run to cheer the participants with five bands from the police department performing at the main venue and along the route. Chief Secretary S K Joshi will release two books on women safety and child sexual abuse on Saturday evening at the pre event programme at People Plaza's.