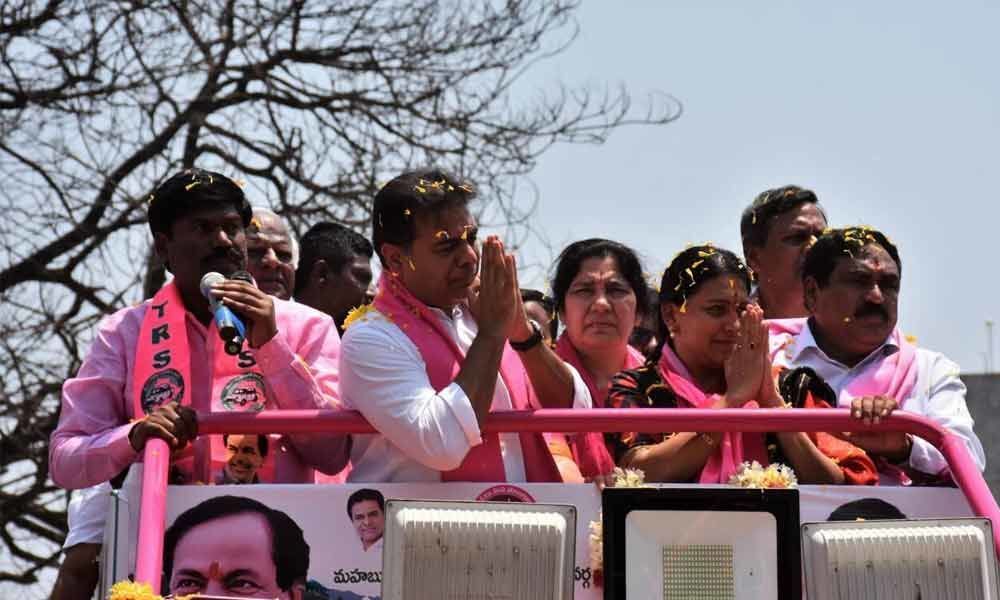 Hyderabad: Although the ruling TRS in Telangana decided to stay away from campaigning in support of the YSR Congress in Andhra Pradesh, party working president KT Rama Rao on Saturday claimed that YS Jaganmohan Reddy's YSR Congress is very much part of the Federal Front, an alternative to the BJP and Congress at the Centre floated by TRS supremo K Chandrashekar Rao.

Earlier, the TRS decided to take up poll campaign in support of the YSR Congress but withdrew the proposal in the eleventh hour anticipating political advantage to TDP chief N Chandrababu Naidu on the issue of intervention of KCR in AP politics through the YSR Congress. Stunned by Naidu's vigorous campaign against KCR and Jagan's collusion politics, KCR also cancelled his tour of AP during this poll season.

Participating in a party roadshow in Narasampet town in the Mahabubabad Lok Sabha constituency, KTR said Jagan and other leaders such as West Bengal CM Mamata Banerjee, Odisha CM Naveen Patnaik and Samajwadi Party leader Akhilesh Yadav are part of the Federal Front which will play a decisive role at the Centre in the formation of government after the general election.

The TRS will win 16 MP seats and gather support of 150 MPs from other regional parties, he said, adding that the Front will decide the Prime Ministerial candidate.

KTR predicted that the BJP tally will not cross 150 and the Congress will secure less than 100 seats. In Southern states, the BJP will not win more than 10 seats out of the 130.

The TRS leader came down heavily on Prime Minister Narendra Modi for the latter's failure in the development of the nation. He said the states are starved of funds in the BJP government.

Once the Federal Front assumed important role at the Centre, KTR said the states will get their due share in the funds and also powers. The promises made by AICC president Rahul Gandhi are not viable for implementation, he added.